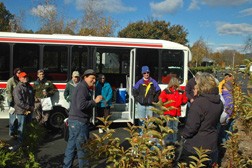 In mid-April The Ridges Sanctuary announced a new series of tours and, according to director Steve Leonard, the response has been overwhelmingly positive.

“To say the Byway Tours are a success would be an understatement,” said Leonard. “All tours are filling quickly, and one – the Orchid Mania tour on June 22 – has only two openings left right now.”

To meet the demand for this popular half-day outing, a second Orchid Mania tour has been scheduled for June 21, 8 am – 12 pm. The cost is $30 for Ridges members and $40 for the general public. Transportation is included in the fee.

Ridges naturalist Karen Newbern and well-known Door County naturalist Paul Regnier have teamed up for the tours which kick off with a free Bird Watching Primer on May 31. Half-day tours include Birding Along the Byway on June 1, and Orchid Mania and Wildflower Wonders on June 21 & 22. The series concludes with The Nature of Door County Along the Coastal Byway on July 20, a full-day outing focusing on the unique natural and cultural history of the county.