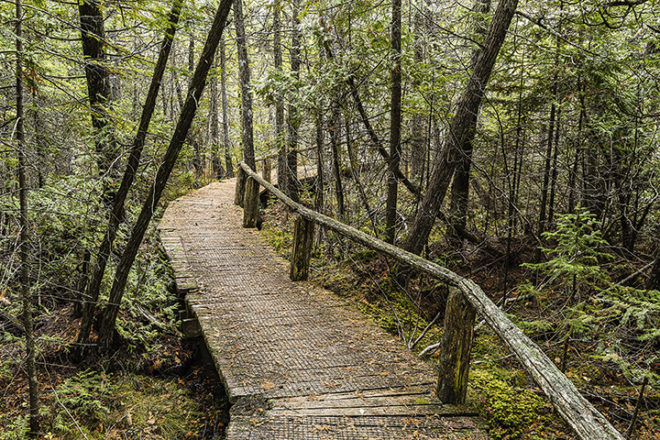 A springtime hike among these 1,600 acres introduces visitors to flora and fauna almost exclusive to this little patch of North America. Photo by Len Villano.

Nestled along the Door Peninsula’s eastern shore is one of the state’s most biologically diverse ecosystems:  The Ridges Sanctuary. A springtime hike among these 1,500 acres introduces visitors to flora and fauna almost exclusive to this little patch of North America, from native orchids to the federally endangered dwarf lake iris.

The sanctuary’s namesake comes from the most distinctive elements of its topography – ridges (long, narrow stretches of land) and swales (low tracts of marshy or damp land). Five miles of rustic trails and an accessible 1,800-foot boardwalk allow visitors to traverse this unique landscape, which was established as a sanctuary in 1937.

The ridge-swale complex is the result of Lake Michigan’s movement during the past 1,400 years and provides the variety of habitats, from beach to conifer forest, that allow 25 species of native orchids, more than 60 species of breeding birds, and 12 threatened or endangered species to thrive here.

It was 80 years ago this year that Ridges volunteers first began cutting a trail system through this Baileys Harbor property. They did so with the mission of educating and inspiring environmental stewardship in sanctuary visitors. 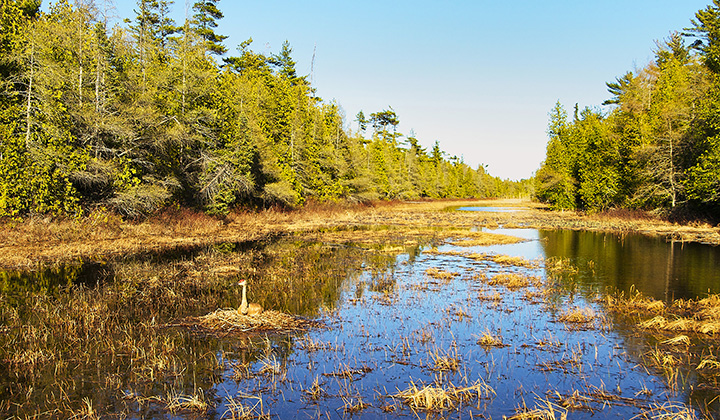 The landscape of The Ridges Sanctuary in Baileys Harbor is one of the most pristine in Wisconsin. Photo by Len Villano.

Although anyone can drop $5 in the trail pass container and set out on the trails, first timers would be best served by coordinating their visit with one of the Ridges regularly scheduled guided hikes. Jane Whitney has been leading guided hikes and snowshoe jaunts at The Ridges for 10 years, and has her talking points down pat.

“It gives them a much greater overview of what’s here and understanding of why it’s special,” Whitney said of the guided hikes. “It’s different from other nature sanctuaries because of that boreal forest aspect.”

That “boreal forest aspect” Whitney refers to is yet another unique aspect of The Ridges – a forest completely composed of conifers (with a few white birch thrown in) more typically found in such cold-weather places as Canada and Scandinavia. The boreal forest exists here thanks to a confluence of perfect environmental factors.

“Our harbor is perfectly U-shaped and faces south without interruption,” Whitney said. “So all the breezes, all the air can pick up the cold temperature of Lake Michigan waters and moisture and it comes this way and slams into the head of the horseshoe harbor and drops it right here on The Ridges, so we’re able to stay cold.”

A walk here is not like being dropped into the middle of Canada, however. The Ridges maintains that distinctly Door County look with a healthy dose of cedars, which love the calcium found in the peninsula’s bedrock base.

So what will a May or June walk along the boardwalk and trail reveal to Ridges visitors? A chorus of spring peepers, bird songs and dozens upon dozens of beautiful spring flowers, along with the occasional otter, porcupine and heron. 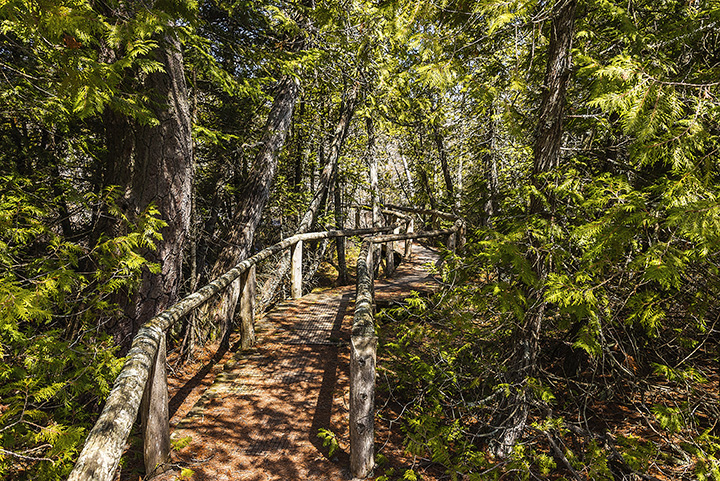 Whitney begins her hikes at the Cook-Albert Fuller Nature Center where, next to the door leading outside, a “bloom chart” hangs. On this, Ridges staff pin photos of the native flowering plants currently in bloom. In the spring, it begins fittingly with the trailing arbutus (or mayflower).

“It’s a ground dweller,” said Julie Knox, another Ridges hike guide. “It’s really fragrant. Little pink blooms, very fragrant and you can’t smell it unless you do a nose-plant.”

From then through May, dozens of others will join the mayflower’s rank, including the uncommon dwarf lake iris, a miniature iris with showy violet-blue flowers.

“Dwarf lake iris are really special,” Knox said. “Here they’re going to be all over the place but they’re a very uncommon plant worldwide. They only grow in a few places along Lake Michigan and Lake Huron. They’re federally threatened.”

“We literally have carpets of them,” Whitney added. “Tens of thousands of plants for the dwarf lake iris.”

Along the accessible Hidden Brook Boardwalk, which was officially dedicated in May 2016 and meanders between ridges and swales, is what has been called The Ridges’ living laboratory. Here, visitors can bear witness to the sanctuary’s restoration and protection of orchids, dwarf lake iris and the Hine’s emerald dragonfly. Perhaps most ambitious of those is a project begun in 2015:  the orchid restoration project.

The Ridges is home to one of the highest concentrations of orchid species per acre in North America, with 26 of Wisconsin’s 49 known native orchid species existing here. To maintain and grow these populations, Ridges staff and volunteers are restoring five species of orchids along the 1,800-foot boardwalk, which spans from the Cook-Albert Fuller Nature Center to the old boardwalk between the Range Lights. Plots of newly outplanted orchids are visible and within reach of the boardwalk, a risky venture that staff and volunteers believe is worth it to educate visitors. 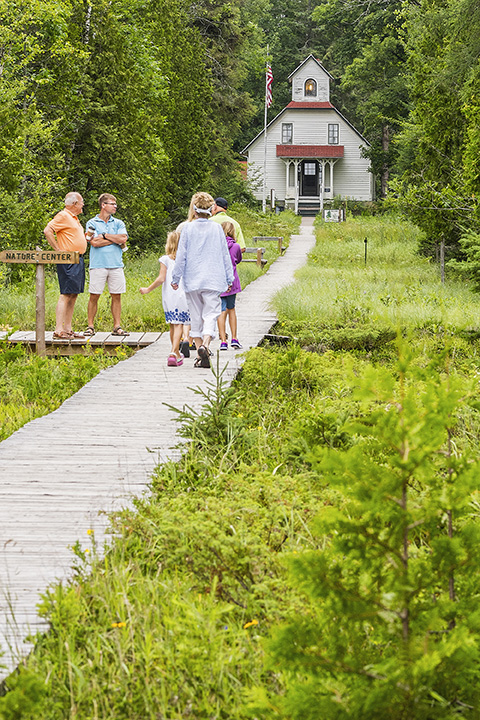 The new Hidden Brook Boardwalk (not pictured) connects visitors with the old boardwalk, where they can visit both the upper and lower range lights. Photo by Len Villano. 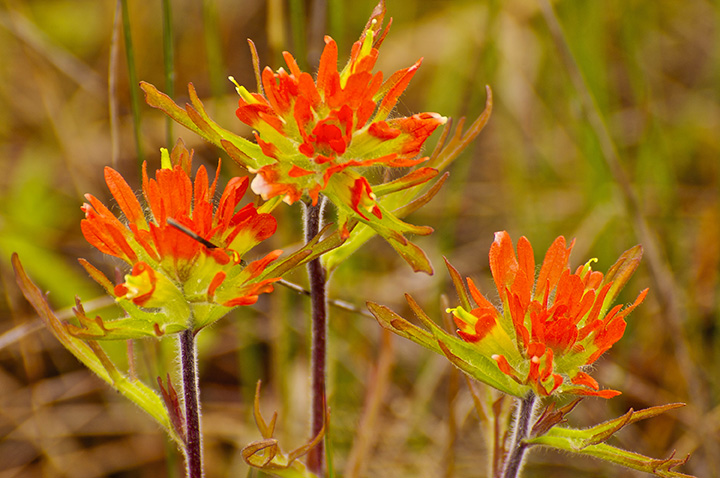 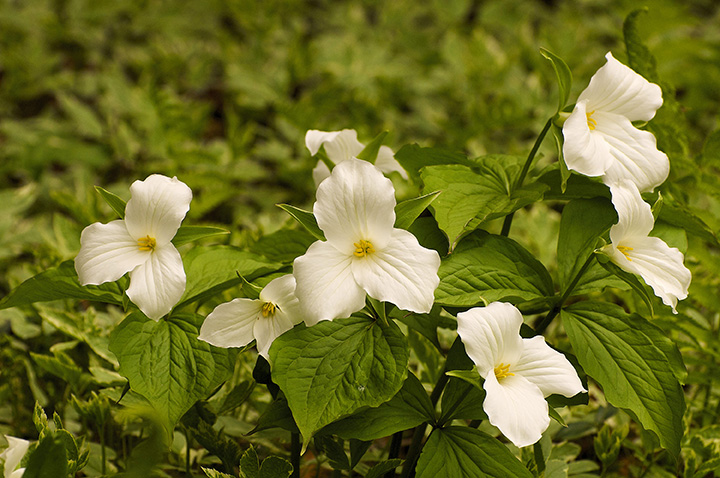 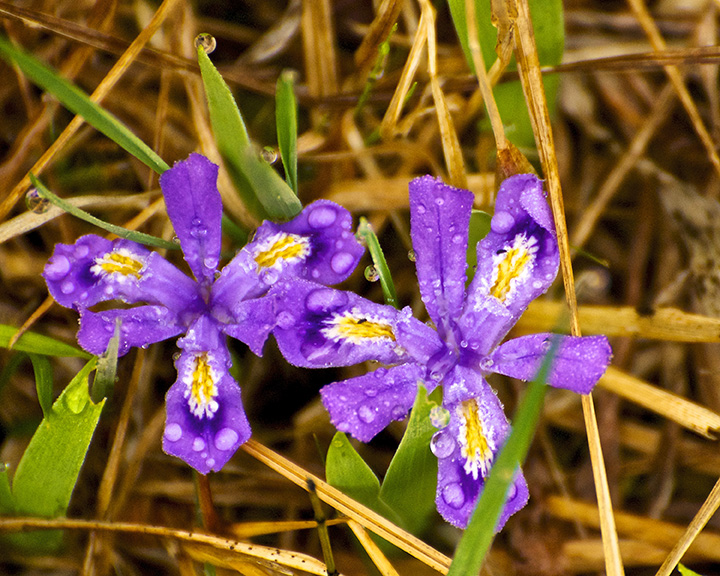 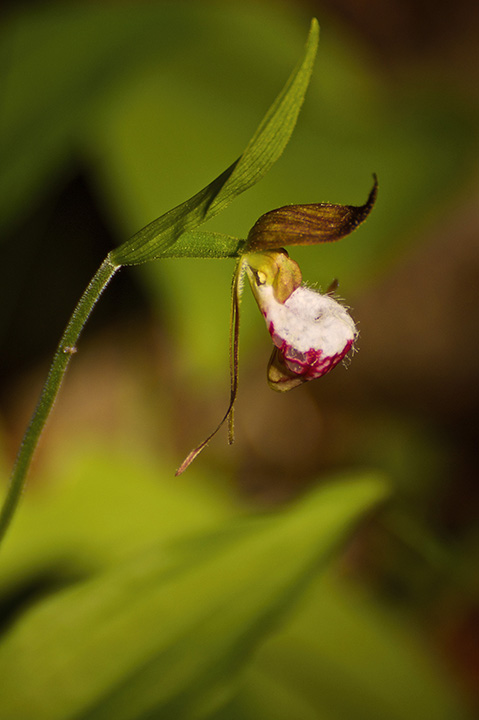 Spring at The Ridges would not be complete without the sights and sounds of our feathered friends.

“May and June are spectacular for the variety of birds that come through,” Whitney said. “And the frogs. If they hike this in the evening just at dusk, they can hear a lot of the frogs.”

Beyond the boardwalks, ambitious hikers can get their boots in the dirt and take their pick of any of the trails paralleling the harbor, and can hop from one to another with the help of miniature boardwalks that bridge the gap between ridges.

Regardless of whether someone hikes the trails or uses the boardwalk, Ridges visitors will be steeped in a unique microclimate that puts nature and preservation front and center.

“What’s underrated is simply the opportunity to experience this type of habitat so close to population,” Whitney said. “You don’t have to go to the UP [Upper Peninsula of Michigan] or Minnesota or into Canada. You can do it here.”