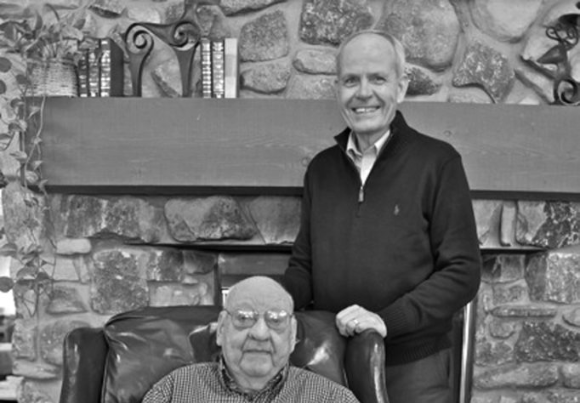 The moment happened 47 years ago, but the memory is clear to Chris Forbes. A day earlier she had taken her young daughter Stephanie to the hospital wrapped in blankets and struggling to breathe. Hours later she went home with only the blankets, lost in the disbelief, experiencing the numb fog that arrives when a parent must bury a child.

“It’s like somebody gave you a drug where you know where you are, but you can’t do anything,” she remembered.

Days later she walked up to the Casperson Funeral Home, still feeling her way through the fog, looking for Clyde Casperson or his son, Greg.

“I remember it like it was yesterday,” she said, her voice choking. “Clyde came up and took me to the casket, and had a little baby hairbrush in his hand, a little pink one. And he said, ‘I don’t know how you combed your baby’s hair, and I thought you might like to do that.’ Who thinks of that? In that terrible time in your life, Greg, or Clyde, when they came, you just breathed a sigh of relief. When you get to that funeral home, you get there and they reach their hand out to you. And you know you’re not alone.”

For 98 years, the Casperson family has been helping people feel less alone in their darkest hours: a grandmother’s slow fade, a brother’s sudden death in a car crash. In those times and all others, first Edwin, then Clyde, and for nearly five decades, Greg Casperson have been there in the heart of Sister Bay, reaching out a hand.

But how? How does a man do it every day? How does a person in a tiny, isolated town of fewer than 900 people, do a job that requires that he be there for people on one of the hardest days of their life? Or worse, how does one do the heavy lifting of burying a friend’s parent or child? Or a childhood friend you’ve known your entire life?

Even Greg isn’t entirely sure.

“You ask me how I do it, and I don’t know,” he said from a seat in the empty funeral home across from the Sister Bay marina – a room that most northern Door County residents have passed through in mourning at some point or another. “But I guess seeing my Dad, how he did it, that rubbed off. He said you try and treat everybody like family. You do that, and it usually works out.”

In October, Greg and his wife, Debbie, sold the funeral-home business to Huehns Funeral Home in Sturgeon Bay. Greg continues to work for Huehns, but friends will gather Feb. 10 at Shepherd of the Bay Lutheran Church in Ellison Bay to thank the family for a century of being on call to the community 24 hours a day, 365 days a year.

“He’s touched the lives of so many people because he’s been involved in so many difficult times,” said Dick Burress, the former Door County emergency-services director who worked alongside Greg in so many tough moments. “I think the community owes him an awful lot. He’s been a rock for a long time.”

Clyde was a fire chief who ran the ambulance service when Greg was growing up, so the phone in the Casperson home was always ringing with bad news. Sometimes young Greg answered the phone, and, if it was a fire, he ran over to ring the fire siren at the station, then wrote in chalk where the fire was. By the time he was eight, he was joining Clyde on calls, helping pull out the hoses.

“You’d see families in grief, and it was usually people that we knew,” Greg said.

To the outsider, it seems that absorbing that grief every day would become too much to bear, but Greg said it was as much an opportunity as a burden.

“Contrary to whatever people think about people being cynical, I also saw that that’s when you found out how much people cared for each other up here, and often they would do things and offer to help,” he said. “So I really saw the good side of people. It kind of formed how you looked at your neighbors in the community because you’d see what they do. That affected how I looked at life and people.”

Greg and Debbie have one daughter, Sarah, who, like her father, didn’t think too much about growing up in a funeral home.

“It’s all that I knew,” she said. “Seeing my Dad working with people at the most difficult time, but seeing the way that he worked with people, and the way he went about putting people first. I think it was really good character-building to have that example.”

“So much of it is about the people and the communication,” Sarah said. “And I think it’s so much different in a small town – it makes it even more personal and less business. That’s the funeral business I grew up in.”

The funeral, Greg said, is about taking care of a person who has lost someone.

“The biggest thing you have there is people getting together to support someone,” he said. “Everyone in the community is wondering what they’re going to say to them at the grocery store, or walking by them on the street. The funeral gives people a chance to come see them and tell them how much they care. It kind of breaks that divide, that wall that builds up. The longer you go between that, the higher the wall. That’s what the funeral is about.”

Forbes later worked with Greg as a paramedic. She witnessed the effect he had on the scene of tragedies, on the hearts of people in shock and grief. He always arrived in a suit, a sign that a professional was there – permission to exhale. She said that sometimes she could see the pain on his face, especially when it was a young person or someone they knew. Greg would take a minute to collect himself, then morph back into the rock for the family at hand.

“It wasn’t service; it wasn’t a job; it was a calling for them, an anointing almost,” she said. “I don’t know how you would get through those things without people like them.”

People who know that sometimes solace comes in words, sometimes through a hug, and sometimes as an outstretched hand holding a little pink brush.

Shepherd of the Bay Lutheran Church
Feb. 10, 10:30 am
Friends will gather after the 9:30 am worship service for refreshments and to thank Greg and Debbie Casperson for their years of service to the community.