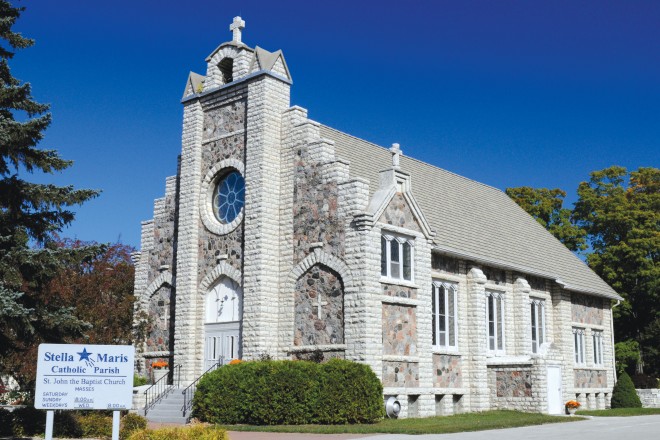 Anyone visiting the Door Peninsula for the first time is certain to be struck by the multitude of stone fences separating the fields. These often-massive structures, in terms of width, are as much a testament to the difficulties faced by farmers as they are to the notoriously limited topsoil available in much of the county. When they weren’t simply removed from the fields and piled into fences, they were – not surprisingly – used as a building material by early settlers.

While fieldstone (as the rocks making up these fences are commonly called) was a natural material for building, dolomite became not only a second stone building material but also a significant part of the county’s early economy. Unlike fieldstone, dolomite needed to be quarried, and early quarries shipped Door County dolomite throughout the Midwest. Indeed, after the Chicago Fire in October 1871, dolomite from the peninsula’s quarries was in high demand for the rebuilding of the city.

Even before the opening of quarries, individual settlers quarried stone off their own properties for the construction of their homes. With as little as 18 inches of topsoil in many portions of the peninsula, accessing the stone was relatively easy.

Early settlers typically wanted to create homes that reflected the regions or countries they had emigrated from, but were forced to adapt to the materials available on the peninsula. One of the best examples of this desire to create what was familiar from what was available is the Neuville house in Southern Door, just north of Brussels on County Road C.

Built around 1857 by August Draize, the home reflects a concerted effort to imitate a typical Belgian home. Using stone quarried from the property, Draize squared and coursed the stone, then laid it out in uniform rows to imitate the brick homes commonly found in Belgium. As with most early stone buildings on the peninsula the walls are a staggering two feet in thickness which allowed the chimney flues to be vented through the walls. The Neuville home is one of the few homes to survive the fire that ravaged the Southern Door community (commonly called the Peshtigo Fire) on the same night as the Chicago Fire – probably due to its stone construction and the thickness of its walls.

While dolomite is quarried and shaped and has a fairly consistent color, the fieldstone that is so visible throughout the county can vary widely in color and density. Fieldstone can be many different types of rock, from densely compacted limestone (often filled with fossilized sea corals dating from when Door County was submerged in the shallow inland body of water called the Silurian Sea) to granite and other “glacial erratics” deposited by retreating glaciers. St. John the Baptist Catholic Church in Egg Harbor provides an excellent example of both quarried dolomite and fieldstone combined to great effect in one structure.

Today, dolomite, while still just as prevalent as ever, is a significantly less common building material on the peninsula. Fieldstone, on the other hand, remains extremely popular, particularly in the construction of fireplaces.

According to Mike Anderson, a fourth generation stone mason from Sister Bay, interior fireplaces constructed of Door County fieldstone are popular features in homes throughout the county. But it’s not just homes that crave fieldstone fireplaces. Last winter, Anderson completed a new fieldstone fireplace at Gordon Lodge in Baileys Harbor that featured the largest firebox he had ever built.

“Fieldstone is, and always has been, easy to come by,” Anderson explains. “Its popularity in fireplaces is largely due to the wide variety of colors and textures it provides when the fireplace is completed.”

A self-proclaimed “newcomer” to the work, Steve Shumway (who has worked for 16 years as a stone mason) echoes Anderson’s assessment of fieldstone. “Fieldstone can vary from greens to browns, grays to off-whites and it is non-dimensional which creates interesting shapes and patterns,” Shumway states. “They [the fieldstones] have character.”

The same characteristics that make fieldstone a popular building material also make it difficult to work with, however. “Since they are non-dimensional they require more shaping and fitting,” Shumway says, “so working with fieldstones requires more time and skill.”

When not used for fireplaces, fieldstones are often used in landscape retaining walls and exterior building accents. Shumway recently completed the installation of over 1,500 square feet of exterior fieldstone on the new workshop building at The Clearing in Ellison Bay.

Though the shorelines on the Green Bay side of the peninsula are literally littered with beach stone, builders and masons don’t have ready access to most of this stone due to state restrictions and/or property ownership. Thus, they must turn to other options.

At the time of this writing, Anderson is beginning one of the largest beach stone fireplaces he has ever built. “The beach stone I’ll be using comes from dredging that I have dumped on my property,” Anderson explains. “I dig through the dredged material and pull out stone that will be suitable for building.” When the waters around a boat launch, in a marina, or in a channel need to be deepened, they are dredged. This dredged material is then sifted which yields the sought after beach stone.

Dredging has occurred on and off for years as the water levels in the lake and bay have risen and fallen. Consequently, the availability of Door County beach stone has varied – when the waters are low, beach stone becomes accessible. “You can almost track the water levels by following the use of beach stone in buildings on the peninsula,” Anderson says. “Look at buildings constructed 50 years ago and you see more beach stone than in the years that follow.”

“Because of my profession, I’m probably one of the few people you will find who doesn’t mind seeing the water levels low,” he adds with a laugh.

Contractors or home owners typically approach the mason with an idea of what they want done and the mason’s job is to create the finished project, but how anything will look in the end is the result of the mason’s craft and skill. Anderson maintains a portfolio of photographs showing previous work he has done to show how projects might look.

The current beach stone project Anderson is working on has almost 750 square feet of interior stonework, including a 19-foot high fireplace in the main room. “The owner is still deciding on a mantle treatment,” Anderson says, “but the walls will incorporate a large recessed area for a painting to hang, and several smaller recessed areas for display to break up the surface and create more visual interest.”

Outside the home are numerous pallets stacked with beach stone ready to be laid. These were all pre-cut by Anderson over a two-week period prior to being transported to the site. “You develop a feel for cutting the stone after time,” Anderson states. “You see the flaws almost instantly.”

Because beach stone has been shaped and smoothed during its time in the water, it typically has fewer flaws than fieldstone to deal with when it comes time to cutting. Another advantage is that beach stones are largely similar in size, which means that more stone from any given lot can be used. “For any given project you will usually need almost one-third more fieldstone than beach stone because of the number of unusable fieldstones you will run across,” Anderson says.

In an eight-hour day, Anderson may spend six hours laying stone and two hours cleaning and sweeping the joints. The mortar requires time to dry, which can vary depending on the time of the year, whether the project is indoors or outdoors, and the humidity in the air. “Usually, after six hours, the lower levels you began the day working on have dried enough to be cleaned, smoothed, and brushed,” Anderson explains. “You want the mortar to look clean and even without distracting from the stone.”

While every stone mason has their own style, Anderson takes particular pride in creating smooth corners. “Arranging the stones so that the outside edge on a corner is smooth and uncut is one of the details I like to create in my projects,” he says. “It’s how I was taught by my father and it’s one of the details that I like to bring to my work.” Anderson also likes to use arches whenever possible.

When all is said and done, however, it comes down to building the individual stones up to create a finished product. “A lot of time is spent thinking about the project,” Anderson says. “Each and every stone you see inside the house and on the pallets outside I have already personally handled at least four times – and by the time they are set in place I will have handled them at least six times.”

“The stone is everything.”