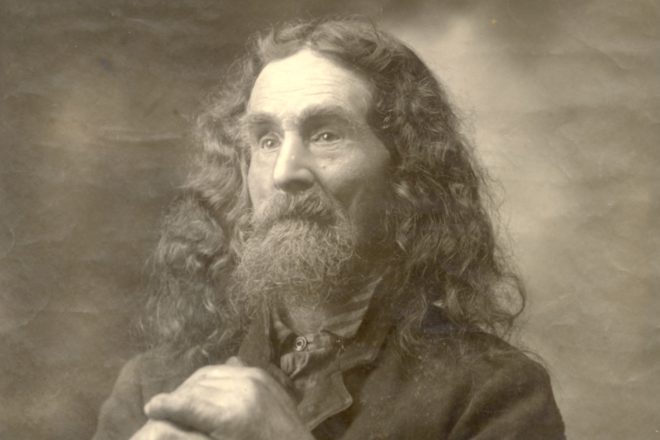 To mend your wares that are wore.

He’ll fix one hole in nothing flat

And put in a couple more.

Door County newspaper editors of the late 19th and early 20th centuries loved sharing stories of a man by the name of Joe Mardin. He was also known as “Wildcat” Joe Mardin and the “Sage of Shivering Sands.”

The little ditty above relates to Mardin’s trade as a tinker: someone who repairs metal utensils.

Among other things, Mardin presented himself as a Civil War veteran, which is a bit of a stretch. In the official roster of the 52nd Wisconsin Regiment Infantry, 30-year-old Mardin is listed as joining Company D on April 10, 1865, which is the day after Lee surrendered. Mardin and the entire regiment were mustered out on July 28, 1865. But that didn’t stop him from sharing war stories — or, as Door County historian Hjalmer Holand wrote in his 1917 History of Door County, in a chapter titled “The Sage of Shivering Sands,” “Old Joe was a veteran of the Civil War and was rather vain of his exploits — some real and some imaginary…”

It seems they were all imaginary. He and his colleagues in the 52nd were sent to St. Louis, Missouri, to guard workers on the Pacific Railroad.

Mardin was born in Maine in 1835. What brought him to Wisconsin is lost, as is how he ended up in Door County. When he died in 1909, his obituary in the Door County Democrat said, “He was one of the oddest characters ever known as evidenced by all who ever met him.”

The late Orv Schopf was so taken with the life of Joe Mardin that he compiled tales and newspaper accounts in a publication from the Door County Historical Society called Joe Mardin: Thinker, Tinker & Stinker. The Sage of Shivering Sands.

In his introduction, Schopf states, “Any history of Door County would be incomplete if it didn’t include ‘Wildcat Joe Mardin.’”

Schopf writes that he first heard Wildcat Joe stories from his father, John Schopf; and later from his father-in-law, Clarence Tweedale. He notes that both men were 10 years old when Mardin died, “but he surely left an impression in their minds.”

Many of the accounts in Schopf’s Mardin collection come from the Door County Advocate. Schopf explains in the introduction that Mardin and then-editor Frank Long were friends.

The tinker part of the book title has been explained. Thinker becomes apparent when reading through the short pieces published about the man. An item in the August 29, 1891, Advocate states that Mardin “has purchased a tract of university land from the state and built himself a house thereon preparatory to opening a summer resort, or something of the kind.”

And then we jump to a December 2, 1905, account: “Joe Mardin has improved his premises at Shivering Sands sufficiently of late that he expects to entertain summer guests next season.”

Mardin was of the opinion that Door County could become a first-class resort area, and he planned to be a resort owner. The rough-wood building that was to be his resort — built of found lumber washed up on shore — was dubbed Castle Romance.

He was filled with get-rich schemes that the editors of the day were happy to publicize, often as front-page news.

In a September 5, 1891, item, he planned to create a harbor and breakwater — with a helpful Congressional appropriation to pay for the work. That would eventually lead to a line of steamers. Two years later, Mardin was still spinning tales of a harbor, but not everyone was swallowing it. “Suffice it to say that Joe has got the thing all laid out — in his mind,” the Advocate stated in a tidbit from November 4, 1893.

By 1900, according to an Advocate article, Mardin’s plans had advanced to include draining Mud Lake in order to build a canal from Lake Michigan, a 60-foot-wide boulevard and a grand hotel with at least 500 rooms.

In 1894, Mardin was entering the cedar shingle business. That same year he planned to take “two specimens of what he pronounces as being the genuine American tiger cat” on tour, about which the Advocate wrote, “If Joe does not slip up on his calculation he will be fairly lousy with shekels by the end of the season.” Later that year he turned to the evergreen trade, and then in early 1895 announced that he was going to raise moles, “and he claims there is thousands in it.”

A September 24, 1898, report finds Mardin in possession of “an educated duck” that would dive for coins. The piece continues by saying he is “also engaged in teaching a pig to play the violin and walk a slack wire.” That was the same year he was reportedly going into the “production of honey on an extensive scale.”

August 9, 1902, reports in both the Advocate and Democrat announced that Mardin had discovered diamonds in a small lake, proclaiming it a larger diamond field than those in Australia or Brazil. “He says his fortune is made, and he will retire from the active pursuit of pole-cats and other fur-bearing animals.” He said he would use the proceeds from the diamonds to begin gold mining “which ore he claims is plentiful near Shivering Sands.”

Regarding the “pole-cats” (also known as skunks), we find an explanation for the stinker in the title. In addition to capturing skunks, Mardin was also said to grease his long hair with skunk fat, which left him, one can only imagine, with a nose-burning Pepé le Pew aroma. He reportedly attempted to ship some skunks to the Columbian Exposition (the Chicago World’s Fair) in 1893, but the skunks objected to heavy seas in the stinky manner to which they are predisposed, and the ship’s captain ordered them to be thrown overboard.

Schopf’s collection of Mardin stories and his own observations make for entertaining reading about a colorful character from the county’s past. Or, as Schopf writes, “A person needs a positive attitude and Joe wasn’t any exception. If there would have been a contest for thinking and dreaming, Joe would have won it by a landslide.”