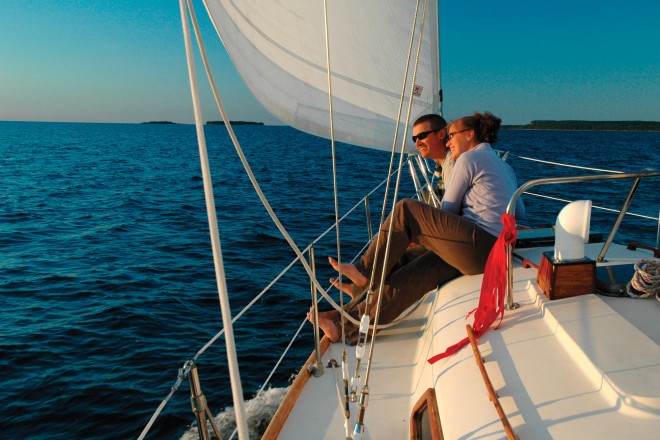 Enjoying the view from the bow of Passage North. Photo by Dan Eggert.

I consider myself a sailing aficionado. In my free time, when I’m not sailing, chances are I’m a) goading, b) guilting or c) bribing one of my yacht-owning friends into hoisting the sails and taking me along for an offshore cruise – none of which, I admit, tends to require much effort. For the card-carrying members of the Lake Michigan sailing subculture, any reason is usually a good enough one to leave the land behind and become the object of envy for shore-bound onlookers.

Within that sailing subculture, though, there’s another group that’s in a class alone: the sailing charter captains of Door County. All together they boast well over a century’s worth of combined sailing experience and, try as I might to vie for an honorary spot among them, they make my self-appointed aficionado status seem downright flimsy.

I’m humbled for many reasons – most of which concern the sheer scope of their expertise. Each spring and throughout the season these captains spend weeks overhauling, fixing, caulking, tweaking and perfecting their rigs; it’s not just the sailing – it’s knowing every inch of the boats they sail and how to MacGyver any problem or snag. On the water, they are gurus of navigating, sail trimming, helmsmanship and maritime law. Even the weather is a subject of mastery. Ask one of them for the hour’s forecast and you’ll not only get it on cue, you’ll also likely get a detailed interpretation of what the meteorologist actually meant to say. Prolonged eye contact during a conversation is pretty rare, too; their eyes constantly scan the horizon, checking for patches of wind and budding storm systems.

But I’m also humbled by how defined their lives are by the sport itself. These captains aren’t mere dabblers or hobbyists. It runs deeper than that. Most grew up sailing (accounting for the endless fountains of knowledge they casually, continually spout) and they look the part. Copious amounts of sunscreen, raccoon-style tans on their faces, and wind-blown hair-dos give proof of their cult-like affection for the sport. Few ever wander far from the water, if at all. In season, they hang out on their yachts before, between, and after charters. During the off-season, better weather beckons most of these dutiful and loyal servants of the yachting world southward, where other adventures will be had.

The good news for envious shore-bound onlookers (and posers like myself) is that getting a glimpse of this world is fully within grasp. Four outfits on the peninsula – Sail Door County, Stiletto Sailing Cruises, Bella Sailing Cruises, and Friendly Sailing Charters – are ready to share the wealth of the area’s waters. Sailing with these charter groups is inexpensive, requires no sailing knowledge or ability, and promises one of the most memorable experiences you’ll have in Door County.

“We go off-shore,” Peder Nelson says when asked what makes his charter unique from

the others in the county. “If the wind’s blowing out of the southwest, for example, we’ll go toward Hat Island, then toward Chambers Island, maybe toward Fish Creek and back. It just depends on the breeze, but we like to get out there.”

A little prodding and I learn that they’ll stay along the coast sometimes, but I take his words seriously. I’m talking to the winner of 2003’s Hook Race, a several days-long regatta that begins in Racine and circumnavigates the peninsula, ending in Sturgeon Bay. (Peder and his crew, sailing on a C&C 34′ won 1st in their class out of 12, and 4th out of 60 overall.) For those who don’t know racing: that’s a big deal.

As a child, Peder was a sailing “groupie” at the Sail Training Foundation in Sturgeon Bay. He raced in college at UW-Green Bay, worked for a naval architecture firm back east, and built canoes in the Peace Corps in the Republic of Palau among other things, so it makes sense that today he’s a full-time sailor.

His charter business comprises two boats sailing from two locations: a C&C 38′, which leaves from the town dock in Egg Harbor and a Cal 40′, which leaves from the Harbor Club Marina (at the foot of the downtown bridge in Sturgeon Bay on the west side.) Captain Andrew Hallett, a long time friend of Peder’s and fellow racer, is also on hand at Sail Door County and together with their two full-time crew they make up a small but passionate group of sailors. Peder and a few cohorts have also recently started the Door County Sailing Foundation to promote sailing throughout the county and to eventually train aspiring sailors.

Stiletto Sailing Cruises is the only charter business on the peninsula that offers the catamaran experience. A catamaran is a sailboat with two pontoon-like hulls with a bridge (on the back half) and a trampoline (on the front half) stretched between them. The catamaran design is built for speed but, as owner Doug Fitzgerald emphasizes, “the boat is very comfortable and very stable.”

Stiletto Sailing runs two catamarans off the South Shore Pier in Ephraim. Its staff is far and away the largest in the area, with seven part- and full-time captains running six trips a day.

Doug and manager/ captain Megan Nelson echo each other when they talk about what inspires them to live the unique life of a sailor. “Like what I do? Like isn’t a strong enough word. I love it. I would like to complain but I really can’t,” says Doug. Megan quickly adds, “All captains are lifelong sailors – we found a job that we love.”

Both speak extensively about how Stiletto’s sailors enjoy getting to know their passengers, as well. The two describe a recent charter with five teachers from Chicago. The group has come to the Stiletto each year for 13 years the week after school lets out. Doug and Megan, having had the rest of the afternoon free, took them all the way up to Sister Bay (the standard charter is an hour and a half long, and goes at least to Horseshoe Island and offers close up views of Eagle Bluff, Nicolet Bay, Chambers Island and the Little Sister Islands). “We ended up singing songs from The Sound of Music the whole way back. Everyone had a great time,” says Megan.

The Bella might be the most recognizable charter in the area from the shore. Its red sails, rising above a 26-foot, 44 year-old, one-of-a-kind “Cat Ketch,” are a fixture in Eagle Harbor, where Captain Tom Schroeder has spent the past several years escorting passengers around one of Door County’s most scenic backdrops.

“I go find the best wind and make sure [the passengers] get to see the bluffs and islands,” says Tom of his charters. “If they’re interested, I also give them an extensive narrative about the history, geology, and shipwrecks of the area.” When I ask him if it’s challenging to be out giving tours all day, every day, I get a smile with the response. “Sure, sometimes,” he says, “but I guess you could say this combines my two favorite things: sailing and talking! Is there a better way to make a living?”

Like the others, his passion has been lifelong. “My parents had a picture of a sailboat on the wall in our family room. My dad lied and told me it was him at the helm; it got my imagination going, though, and I really got hooked.” As Tom rattles off his sailing experience, which includes more than 45 years of sailing and more than 14 years as a captain, I am dwarfed once again. For Tom, this is much more than a job. It really is a way of life and he’s got “a thousand memories” to prove it.

Of the sailing charter captains, none eats, sleeps, breathes and looks the part more so than Captain Jim Legault. A sailor in his youth; a sailboat owner since the ’70s; an ore boat sailor (I’m talking about the shipping boats of transoceanic, gargantuan size) from 1973 to 1980; and a charter captain here in Door County for fifteen years or so, this man is the stuff of legends.

“I once figured out that I had sailed somewhere over 100,000 miles on the Great Lakes,” says Jim. After I hear a few of his chronicles, that number seems impossibly low. He’s sailed on each of the Great Lakes and adds up in his head that, “Yeah, if I think about it, I’ve spent a significant part of my adult life on the water – probably more than 50%. That’s been true for years.”

I wonder if sailing out of Fish Creek feels too tame for him, but Jim seems unfettered; he likes the slower pace of charter sailing in Door County these days. His boat is a 42′ custom-built, steel hulled, 1973 schooner. “It’s a junk rig – same idea as an ocean-going Chinese boat,” says Jim. (“Junk rig” isn’t what it sounds like, by the way; it’s sailor-speak for a classic sail design). It has two masts, two large white sails, and plenty of deck space for lounging around.

When asked why he likes the chartering business Jim says, “I’ve met some nice people over the years. They are relaxed about their attitude – I deal with the cream of the crop of people who come to Door County because they’re relaxed enough to want to do it.” Observing his soft-spoken and laid back way of communicating, I realize that while he might be right, his demeanor must play a big part of putting passengers at ease. He’s in his element and answers like this one are completely true to form.

So there you have a quick look at what I’ll humbly – gladly- refer to as Lake Michigan’s titans. Should you have a chance to sail with one of them, jump at the opportunity. Each charter will take up to six passengers, sails several trips daily (from morning through sunset), and is fully equipped for safety, comfort, and merriment. Do it for the obvious reason of experiencing Door County from the bow of a sailboat. But also do it for the chance to see this subculture at work, up close. Trust me, it’s worth it.