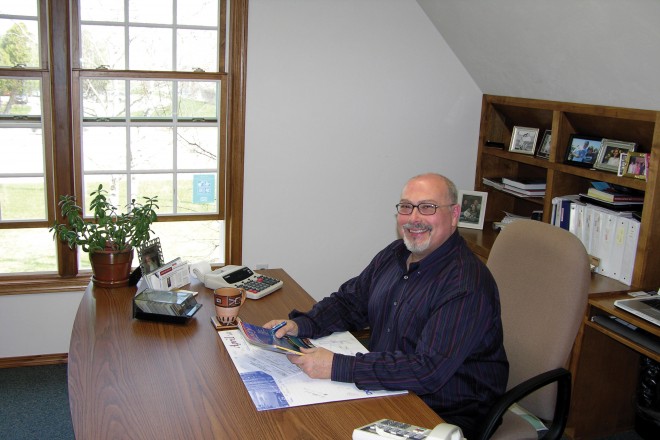 Spring is fighting to make its entrance as Jack Moneypenny looks out his office window at the Door County Visitor Bureau. He, along with the nearly 1,000 business owners who belong to the DCVB, is anxious for the new season to begin. Having arrived at his new post as President and CEO in mid-October of last year, Jack has not yet experienced a full Door County season from the beginning. Seeing local tourism in full swing will be another important step in working toward completing his mission for the county – namely, keeping Door County a must-see destination for visitors from the Midwest and beyond.

Jack was offered the position of President and CEO after a major recruitment effort by a search firm hired by a committee of DCVB board members. The committee was interested in finding the right candidate to promote Door County to its full potential. With the recent addition of a room tax giving the county more proportionate marketing resources, concerned business owners wanted to find someone who would have the right mix of budgeting experience, marketing savvy and, of course, enthusiasm.

DCVB Chairman of the Board, John Lowry, thinks back to the extensive search. “The firm narrowed down the 200 candidates to just six. Of those six, Jack was our hands-down favorite. He has a strong marketing background, is very professional, has a great personality, a good sense of humor, and perhaps most importantly, he has an ability to bring people together.” The expectations were as high as the challenge was great. No one involved had any illusions about just how much work was ahead of Jack and the organization.

Jack’s career with the public began back in Ohio. After graduating from Ohio University with a degree in art, he went on to get a mortuary degree. He had always wanted to do something in public service and felt that being a funeral director would be an honorable profession. “One of the most gratifying parts of my job was the appreciation of the families for making such a tough time easier for them,” he says.

After developing allergies to some of the chemicals used, Jack had to leave the industry. A lasting lesson Jack took with him goes back to what he learned in his Crisis Management classes in mortuary school. He says, “People react differently when emotions are involved. Small business owners are emotionally attached to what they do. Part of my training, and experience, is to be sensitive to that.”

In 1979, Jack and his wife Susan moved from Ohio to Racine, Wisconsin to be nearer to her family. It was there that Jack transitioned to the tourism industry where he worked for nearly eight years at the Racine Marriot. After that, he worked at Holiday Inn City Centre in Milwaukee for seven and a half years. He then moved on to work at the Greater Milwaukee Convention and Visitor Bureau for 11 years, six of which were as Vice-President of Convention Sales. Milwaukee is considered a second-tier tourism city; New York would be an example of a first-tier city, Des Moines, Iowa a third tier, and then finally resort areas such as Door County and Cape Cod, Massachusetts fourth tiers.

Many in Jack’s position would have aspired to reach a first-tier city; however, that option held no appeal for him. “There are way too many politics involved in a major metropolitan city and that is not how I wish to spend my time. You lose touch with the people you are representing. I think it is pretty cool that I have direct access to the community,” he says.

So far, he feels as though the majority of the county has really embraced him. “Being an outsider coming into a community like this is not always an easy transition, but I think people have seen what I can add here,” he notes.

Jack gives kudos to the previous administration for what they were able to do with such a limited budget, one that was 1.3 million dollars less than what they are working with now. “A lot of great programs were started, but there weren’t enough funds to complete them. It became time to reach out before we lost more market share. Now we have the ability to remind people to come back, plus reach a whole new generation,” he comments.

Ten years from now, Jack feels that the infrastructure will have been built and the Door County marketing machine will be running a lot more smoothly. He is glad that he is in on the ground floor and part of the process. Plans for the nearer future include a well thought out three-year plan. Chairman Lowry comments on the changes that have already been made, saying, “Jack really has a full plate, but he is extremely diligent. Apart from reorganizing the staff and dealing with a lot of internal changes, he has begun to put his stamp on the marketing efforts. When the dust settles, this will be a marvelous footnote in his career.”

Jack’s marketing approach can be broken down quite simply. He feels that sales is storytelling. A self-titled seanchaí (Irish-Gaelic for storyteller), Jack knows that Door County’s tale is one well worth telling. “We have a great destination here, but it has to be re-created in people’s minds,” he reflects. “I haven’t met a single person who has visited here that hasn’t said ‘Hey, I’ve got to get back there.’” His reputation of being a seanchaí prompted his family to have an Irish road sign made saying just that. In his office, the seanchaí is also surrounded by pictures of his wife of 30 years, Susan, his children Zachery, Aaron (Jane), Ashley and granddaughter, Kailey.

As all of the businesses start to re-open for the season, Jack plans on meeting more and more people in the community. He wants to make sure that everyone has access to the information about all the positive changes that have been made. “Door County is such a wonderful place to be promoting. We are hopeful that in the not too distant future, that all of the communities will want to promote a unified county. Truly, that will be the springboard to success. I was brought here to do a job. Every day I come to the office and give a 110 percent effort to represent 80 percent of the population. That is not acceptable.” By organizing listening sessions in each community and continuing to dialogue with business owners and leaders, he is hopeful that all of the DCVB goals will be met.

“Everything in my career so far has led me to this role, which is the absolute pinnacle for me,” he says. Though the bar has been set high by both him and those whom he represents, Jack knows he is up to the challenge having worked for it for decades. While he begins to share his version of the Door County story, you can bet that everyone will be listening.