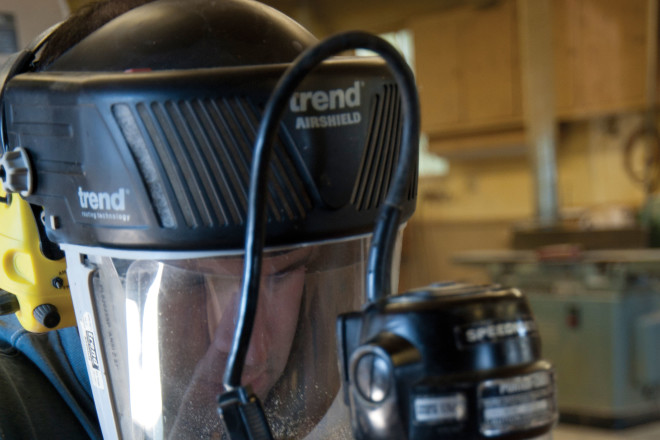 Handcrafted wood signs are part of the charm of the Door County landscape. Other communities may be happy with machine-produced items of metal or plastic, but many in this land of black-and-white cows, apple and cherry orchards, cozy restaurants and unique little shops prefer to announce their wares and identify their homes with signs that began life as trees. 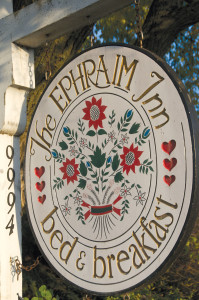 Many of the iconic Door County signs originate at Runquist Cedar Works in Fish Creek and Hartmann Sign Studio in Sister Bay. Merrell Runquist’s father was foreman of the cabinet-making shop for Peterson Builders, Inc., and Merrell got his first woodworking tools at age four. He spent 28 years as a clinical psychologist on the East Coast and a teacher at the medical schools of the universities of Virginia and North Carolina, but working with wood was always a hobby.

He returned to Door County 14 years ago and bought Bob Spielman’s furniture-building shop. Three years later, Merrell bought Spielman’s handcrafted wood sign business. He got into the sign business in a big way. His second order was for the largest sign he’s ever made – an 8-foot by 13-foot construction for Birch Creek that took five men to lift. Like most signs, it was made of many layers of wood glued together – a slow process that in this case required a week to complete. Creating the sign took another month.

People who’ve had signs for their homes made at state fairs may have had a choice of two or three styles of lettering quickly produced by a pre-set router. They’d be amazed to see the handcrafted process in Runquist’s shop. Every creation is unique. Every letter and design is drawn freehand. Letters may be recessed from the face of the wood by cutting each one freehand with a router. Merrell and his associate, Troy Hasenjager, who’s been with him since 1998, have created hundreds of signs with this technique. Examples include Alexander’s Restaurant, Shops at Barringer Crossing, and Northern Door Child Care Center. In the latter two cases, the letters were cut separately and screwed onto the completed signs, creating a three-dimensional effect. 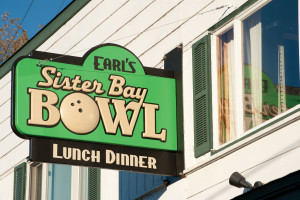 Raised lettering, another popular style, is created by drawing the lettering and design on the wood, covering them with a rubbery “resist” material and then sandblasting the rest of the piece. Examples of this type can be seen at Hidden Harbor, Online Door County, and Gibraltar Town Homes. Raised lettering is an especially effective technique for redwood, which has a beautiful grain and lasts forever, but it’s expensive and used mostly for commercial signs. White and red cedar are more usual choices. Signs are hand painted or left unpainted to weather to a soft grey.

Merrell and Troy estimate they’ve made more than 1,000 signs in the past 11 years. Some grace housing developments in St. Louis and New York. Others have found homes in Ireland and Jamaica, where the customer wanted a sign for his vacation home adorned with the national bird.

Hartmann Sign Studio is a family operation. The basement of their large home is the workshop for Ralph and his daughter, Carol Hartmann Champeau, who began assisting her dad when she was 16, left for three years to work at Taco Bell, and decided that life was more fulfilling back among the paint pots and sawdust. Wife and mom Vivian is the bookkeeper and will, in a pinch, paint backgrounds – “nothing delicate,” she says. The Hartmanns have been in business for 38 years, 29 of them in Door County. Before the move, Ralph also had a full-time job creating displays for utility companies in Illinois.

Unlike Merrell, the Hartmanns use computers to create their signs. Full size mock-ups of designs and lettering can be transferred to the prepared wood. If the lettering is to be raised, resist material is 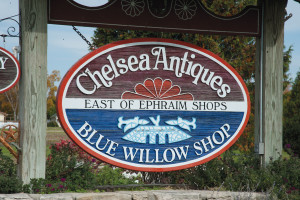 applied before the background is “weeded.” A company in Green Bay does the sandblasting. It took just about 20 minutes to do the work on a huge sign for Danish Mill, a new restaurant and gift shop on Washington Island. After sandblasting reveals the beautiful grain of the wood, the raised components are hand painted.

Other signs may also be painted by hand, with Carol handling the “delicate” areas, or they may be finished with vinyl machine-cut letters generated by two linked computers. “The sign business has changed,” Ralph says. “Most of the ones we make now use vinyl letters, although we can still hand cut them, too.” The Hartmann Art Gallery near the family home displays Carol’s special talent as a painter of Dutch hex signs.

The Hartmanns’ first customer in Door County was Leonard Peterson from the Wagon Trail Resort (now called the Rowleys Bay Resort), and they still appreciate that this big job was entrusted to the new business in town. They’ve also done all the signage for the Village of Sister Bay, the 4-foot by 8-foot sign for the Log Den, and signs for Wilson’s Ice Cream Parlor, the White Gull Inn, Ephraim Inn, Seaquist Orchard, the Viking Grill and thousands more. In fact, the invoice number for their sign for the Danish Mill was 21,023! 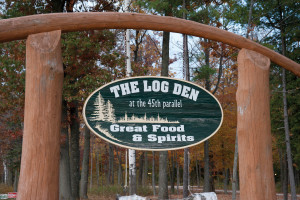 There’s a story about the new Viking sign, that wasn’t quite ready to hang when the producer of the locally-filmed movie, Feed the Fish, called to say they were ready to shoot scenes at the restaurant and needed the sign in place. Carol explained that only one side of the sign was finished. “Fine,” the fellow said, “we’ll just show one side. We need it now.” The crew hung the sign, got the shots they wanted and returned it for Carol to complete in the studio. A plus for this job was that Carol got to appear in a scene at the Viking with the star, Tony Shalhoub.

Tim Nyberg, who owns g42/Gallery 42 in Sturgeon Bay, does design work through the Midnight Oil division of his firm, Octane Creative. He has clients all over the world, including Fortune 500 companies, and is especially interested in designing signs that match the era and personality of businesses. Tim is an artist, author and graphic designer, with about half his time spent on designing logos and signage. He often works with Scott Wieland, who owns Maple Street Signs in Sturgeon Bay. Scott’s recent work includes signs for Wild Tomato in Fish Creek and the Madison Avenue Wine Shop in Sturgeon Bay.

Tim has designed signs for, among others, The Cookery, Artists Guild, Sister Bay Bowl, Sister Bay Café and Small World Market. “Good design is especially important in Door County – almost as important as a good business plan,” Tim says, “because so many businesses are competing for customers’ attention. Many of them are visitors to the county whose first and only impression of a business is that which has been created by the signage.” 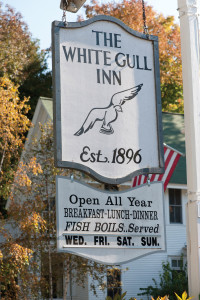 A number of the signs produced by local woodworkers are designed by Dave Hackett, another local artist whose work in his Fish Creek studio includes sign and logo design. A former art director for advertising agencies in Milwaukee and owner of his own graphic design agency, he moved to Door County 11 years ago. Among the businesses for which he’s designed signs are Chelsea Antiques & Blue Willow, Harbor View Resort and Pioneer Acres. Dave is also known for his watercolors, which often take the form of montages. A notable one was created in 2009 for the 100th anniversary of Peninsula State Park, a project that was especially dear to his heart as his wife, Carol, is the granddaughter of the park’s first superintendent, Albert E. Doolittle.

Although the look of wood signs is still in demand, most designers/sign makers (except Merrell) now prefer synthetic materials, especially a high-density foam that, when finished, can’t be told from wood and will resist rot, assuring that the trademark Door County charm will be around for years to come.

Signs Say It All

Door County pioneers’ affinity for the water is reflected in the signs for the communities they established. There are the Ports, Jackson and North; the Bays, Sturgeon, Sister and Ellison; the Creek, Fish; and the Harbors, Baileys and Egg. Many of their signs feature boats. 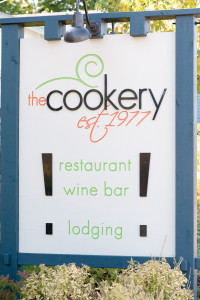 There are clever signs:  PC Junction, one of just two (that we’re aware of) restaurants in the U.S. with food delivered via railroad; and Fishstock, surely the only concert venue with that name that once housed cows.

There are the signs on businesses that seem to have been here forever:  the centenarians, Liberty Park Lodge, Pioneer Store, Wilson’s Ice Cream Parlor, and White Gull Inn (official home of the best breakfast in the country!); the Viking (site of the first commercial fish boil in the county); and Gordon and Glidden lodges.

And there are businesses that, no matter what their present signs say, will always be referred to by old-timers, as their once-upon-a-time names:  Fast Freddie’s, Wagon Trail and C&C Club.

Merrell Runquist, noted woodworker and public servant, left a huge void in the community when he died October 9, 2010, of a heart attack. He was 64. His death left a hole to fill for the Town of Gibraltar, the Door County Board of Supervisors, and his friends and family.

Runquist had been Gibraltar’s town chairman and a Door County Supervisor for many years, where he served in leadership positions on several committees. 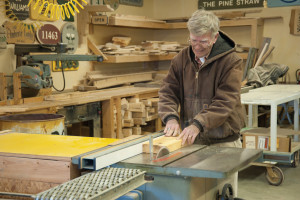 Known for his measured, deliberate style, Runquist was a chairman who had total control of town meetings and commanded the respect of the room. Demanding, but not inflexible, Runquist required that people – whether it was a developer or community organization – come before his board fully prepared, and he was known to ask detailed questions. Mariah Goode, head of the Door County Planning Department, admired his low-key leadership.

“He had a good way of getting information out of people,” she said. “He would ask a question that made me think, ‘Why is he asking that, I know he knows the answer to that question?’ Then I realized he was just asking to make sure the person he was asking knew the answer, and so it got out there for everybody else to know.” 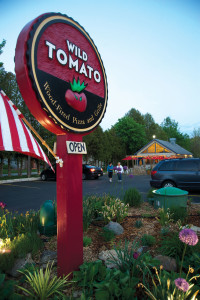 Runquist was born in Sturgeon Bay in 1945 and attended Gibraltar High School before earning his Ph.D. in Clinical Psychology in 1975. Before returning to his hometown late in life, he held academic positions at the University of North Carolina and was an Assistant Professor of Psychiatry and Psychology at the University of Virginia.

Troy Hasenjager worked for Runquist for 13 years, learning and growing in the woodworking trade under Runquist’s tutelage.

“He was almost like a second Dad to me,” Hasenjager said. “He never called me his employee, but always his partner or associate. He was always good to me.”

He is survived by his wife, Elizabeth Hollins Martin, two daughters and four grandsons.