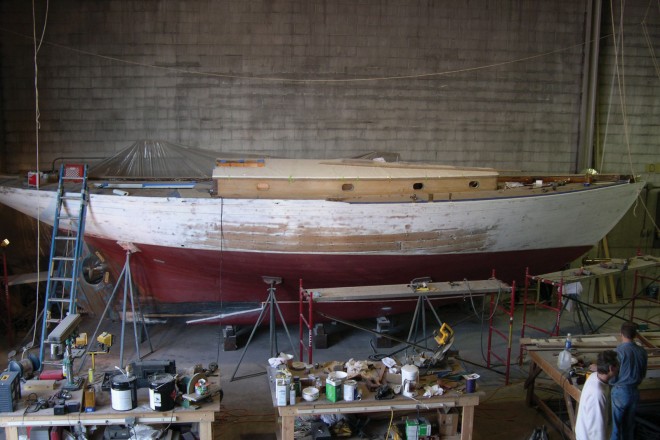 Sturgeon Bay is a boat town and has been ever since the area was settled in the mid-1800s. A trip through the Founder’s Gallery at the Door County Maritime Museum demonstrates the fierce pride this bustling little city of 10,000 has in its maritime heritage to even the most casual observer, and justifiably so.

During the boom years immediately following the Civil War cities, towns and railroads were being built about as quickly as materials could be attained. Outside of big cities, roads were poor to non-existent making overland travel expensive and time consuming. The preferred modes of transport were by rail and sail. The lumber, so plentiful along the shores of all the Great Lakes, was in tremendous demand and the people who designed, built and operated the big, fast boats that carried goods around were very important to the growth of the nation.

Although technological improvements to auto and truck transport along with the emergence of a vast and sophisticated network of highways rendered many commercial boats obsolete, ships of all sorts continued to be built here. Sleek yachts sporting the kinds of lines that make them look fast even when they’re docked are built here, as are broad shouldered ore and grain carriers – some as long as 1,000 feet. Car ferries, research vessels, fishing boats and ships of war have all been designed, built, fixed or converted here, too.

Some of the most painstaking work with boats takes place during the intricate restorations of sport and recreational boats. Two area men, in particular, are drawn to this art: Keith Kollberg who lovingly restores wooden sailboats and Dave Mann who has a soft spot in his heart for the classic lines of Chris Craft cabin cruisers and runabouts.

“I just like old boats,” says Mann in a characteristically understated way. “I want to preserve something of the past. If nobody takes care of the old stuff, it’ll be gone forever.” A cut-to-the-chase kind of guy who reminds some of a cross between Glenn Ford and Henry Fonda, Mann has been working on boats for about 25 years and finds them mostly at boat shows and, lately, on the internet as well.

Currently at work on four boats in his workshop, he looks for boats with as much of the original hardware as possible and for the original engine to be intact. “You’ve got to do your research about how the boat looked when it was new. You’ve got to know what’s been altered so you can fix it back to how it was.”

Keith Kollberg created his business, Star* Board Wooden Boatworks, two years ago. His path “coming out of the shadows of other employers,” was a long one. A boyish 50 with reddish sandy hair and an irresistible grin, he spent several years as a leader for Sea Scouts, was a welder on boats of many types for Bay Ship and Peterson Builders, and worked as a carpenter in home construction and for Palmer Johnson Yachts. A more fitting course of study in the deep understanding of boats and construction could hardly be imagined.

To spend an hour with Kollberg is to understand the pure joy of sailing perfection that may be experienced by the perfect mixture of a well-designed and maintained boat, a true heart, a stiff wind, and bright sun and water as far as the eye can see. Helping a good boat and crew return to that sort of sailing nirvana is noble work.

He speaks eloquently and tenderly about the spirit of the boat, the water and the wind, and the links formed between people and their boats. “A wooden boat is a being with whom you share your life. The work itself is a meditation,” he says.

For 14 of the last 24 months Kollberg has been hard at work on a classic 38-foot Rhodes Cutter – a beautiful wooden sailing boat built in the early 1900s from a design by Elihu Root, the Frank Lloyd Wright of boats. Now owned by John Yount of Milwaukee, this beauty took Best in Show at the 2004 Door County Classic and Wooden Boat Show.

Research plays an important role in the work of each man; knowing as much as possible about the history of the boat, how she’s been used over the years, where she was kept, and how well maintained all play into where a restorer will look for damage and can suggest how problems can be solved.

Restoration work seeks to give each boat renewed life. The Four Fundamentals of any project are:

Every boat is someone’s dream come true and endowed with a bit of the heart and soul of the designer and the builders. The lines chosen by the designer combine with the quality of the materials and the builder’s craftsmanship to create something greater than the sum of those parts.

What’s not to love about an industry that is championed by strong and wise individuals who value the integrity of fine craftsmanship and design and where compromise is something that happens between friends, but never between structural beams? Look for the work of each of these gentlemen at this year’s Door County Classic & Wooden Boat Show over the weekend of August 6th and 7th.