The large amount of snow, eventually glazed over by freezing rain, has made food-finding for many birds, especially the hawks and owls, very difficult. One bird that, based upon the number at our feeders in recent weeks, has been especially hard hit is that black songbird. It’s about the size of an American Robin, having a long pointed beak, short swept-back wings and a stubby tail. You’ve guessed it, the European Starling, most often simply called the starling. 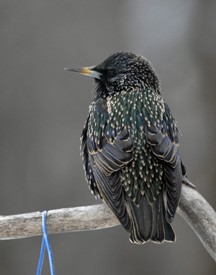 Tan-edged feathers with “v” or star-pointed tips, long pointed beak and nearness of the eye to the beak show well.

Birds don’t do much singing during the cold season, but if you’ve heard weird songs comprised of a rapid succession of squeaks, wheezes, chatters, chips and other strange sounds, they’re undoubtedly coming from a starling. Even though it is also an excellent mimic, it doesn’t rank with the Mockingbird or Brown Thrasher.

A fascinating story in the American Scientist, Volume 78 (p. 106-114) tells in part of Mozart’s pet starling of three years, and that a theme, credited to the singing of his pet starling, occurs in the final movement of Mozart’s Piano Concerto in G major, K.453.

Captive starlings have been found to be able to mimic many sounds including human words and phrases, music, throat clearing, coughing, laughing, kissing, a squeaking door, barking dogs, keys rattling and an alarm clock. Unfortunately for their owners, starlings have a bad habit of vocalizing at times during nighttime hours.

It was in 1890 that 80 European Starlings, Sturnus vulgaris, were released into a new environment, the North American Continent. Little did Eugene Schieffelin, who engineered the plan, realize the seriousness of that act. Quite innocently he and his band of followers were attempting to introduce to the United States all of the plants and animals mentioned in the works of Shakespeare. It is estimated today that there exist on the North American Continent somewhat over 200 million starlings.

They especially like cities for their abundance of available food, nesting sites and a general lack of predators. Then, too, there are plenty of chimneys to help warm these wheezy-voiced opportunists in winter. Especially in times past, you could see starlings perched around the tops of chimneys making use of the warm fumes there. 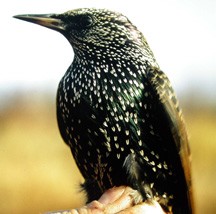 A mature starling in late spring.

Starlings undergo a single feather molt between late July into early September. Many of their feathers during the cold months will be tipped with a light tan or white “V” marking, like one point of a small star. These small “star points” probably gave the bird its name and provide it with a speckled appearance from a distance.

Gradually, during winter and early spring their light feather edges and tips wear off. By spring the bird is a shiny, glossy black laced with iridescent shades of bronze, blue, green and lilac. Their beaks now will be yellow. Because of their strong legs and feet, these “least loved birds” give the appearance of being the proud possessors of a quick, nervous, cocky waddle. They don’t hop as most other songbirds do.

This omnivorous bird is considered by many to be of great value in the balance of nature which is struggling at best, due largely to foreign plant and animal invaders. Because of its voracious appetite for injurious critters, including land snails, cutworms, grasshoppers and Japanese beetles, one simply must recognize (or grin and bear) the starlings’ value in the natural world.

Watch the starling the next time you see one strutting on your lawn in summer. The bird will drive its closed spear-like beak straight downward into the grass, then open it up, spreading apart the blades of grass as it searches for insects. In this industrious manner the methodical little hunter consumes one insect after another, harmful or otherwise.

A starling’s eyes are situated toward the front of its head close to the beak, angled slightly forward, and the bird can perfectly and efficiently scan the ground opened to its view by its spreading beak. This highly successful and intelligent creature is perfectly adapted to locating insects among the low-growing vegetation.

It is during fruit-ripening time that starlings become serious pests. They can virtually destroy an entire cherry, apple of pear orchard, or a vineyard. Their autumn appetite for fruit is legendary and is known in most countries of the world including New Zealand where they were introduced by Europeans in 1862. Starlings, along with their partners in crime, the House Sparrows, are very likely the most common birds in the world today. Fortunately, the House Sparrows appear to be decreasing in number. 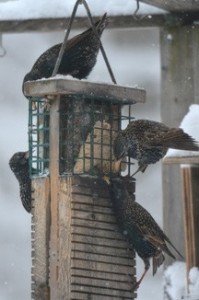 Starlings dominate and fight over the hanging suet block feeder in the Lukes’ front yard.

Starlings associate with humans amazingly well. As various forms of agriculture succeed, so do Starlings. These noisy nuisances reached Wisconsin in about 1923 and within 30 years they had become established over the entire West Coast of America. Their abundance is compounded by the fact that some have been known to live to be 18 years old! They reached my home county of Kewaunee the year I was born, 1929, and most likely were in Door County by that time, too.

If you’ve never seen the starlings’ intricate evening aerial maneuvers en masse as they return to roost, you’re in for a pleasant surprise. This mysterious wide-sweeping social dance, sometimes staged by several million at a time, is thought to help keep the flock together and also make it difficult for predatory birds to catch them.

Supposing that native songbirds of this country could talk, many of the hole-nesters would be bitterly opposed to the fierce aggressive takeover tactics of the starlings. Wrens, bluebirds, nuthatches, hole-nesting swallows, woodpeckers, Great-crested Flycatchers and Purple Martins have all greatly suffered from the encroachment of these foreigners. If it makes a difference in your outlook toward the European Starlings, they are not protected by law.

Whether or not you appreciate the starling is a matter for individual decision, but the more one observes and learns about this nest robber, garbage eater, musical mimic, destroyer of harmful insects, and connoisseur of fruit, the more one thinks of the starling as the Jekyll-and-Hyde of the bird world.