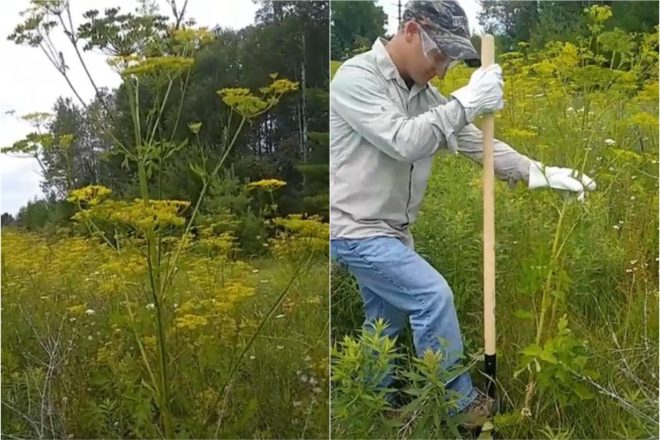 (Right) The non-native, invasive plant is not to be confused with two native prairie species: golden Alexander and prairie parsley. Photo courtesy of Samantha Koyen. (Left) Sam Hoffman, seasonal crew lead for the Door County Soil and Water Conservation District (SWCD), shovel-cuts an invasive wild parsnip plant by digging the shovel in at a 45-degree angle, cutting into the root and popping the plant out. Along with Tina Lee, a second seasonal employee with the SWCD, they’ve shovel-cut about 10 acres of wild parsnip this year in Door County, primarily south of Sturgeon Bay. Photo courtesy of Samantha Koyen.

The journey to learn how the invasive plant is being fought

When you join the virtual meeting, you learn that Supervisor Roy Englebert, who chairs the group, had included it on the agenda. The topic was relevant, he said, because wild parsnip is a dangerous plant, and it’s growing along local roads, including both state highways.

“It is a safety issue as far as I’m concerned,” Englebert said.

When Haefs, a roadway maintenance engineer in WisDOT’s Green Bay office, was finally tracked down a couple days later, he said he’s one of two people who approves permits when a county or town or property owner wants to do maintenance along state highways. He doesn’t know anything about wild parsnip, though.

“Nobody at the DOT is an expert on this,” he said. “We just approve a permit.”

The state contracts with the county to do all of its highway maintenance, whether that’s filling potholes, plowing snow or mowing. And the mowing is simple, Haefs said. Run weeds down once a year and before July 15. If an intersection has visibility issues because of tall weeds, there’s an extra mowing. That’s about it.

Haefs recommended speaking to someone at the DNR. After a couple of days, a search for the right DNR person yielded Kelly Kearns. She’s a conservation biologist who knew just about everything there is to know about wild parsnip, a non-native invasive species that’s classified as “restricted.” That means pastinaca sativa is already established in Wisconsin and has the potential to cause harm.

According to Kearns, wild parsnip “definitely is a safety concern” because the plant’s sap contains a chemical that makes skin more vulnerable to ultraviolet radiation. That means if a person’s skin comes in contact with the sap in the presence of sunlight – even on cloudy days – a severe burn results, including rashes, blisters and skin discoloration.

The DNR offers guidelines for spraying, hand pulling and mowing methods that kill wild parsnip, but the agency does not do work on state highways.

“We don’t have anyone who does that,” Kearns said.

She also said WisDOT has “very little money to pass to counties, and counties can’t take it on because they don’t have funding either, so it just doesn’t happen.”

That appeared to be how the story would end: The invasive wild parsnip exists on state highways in Door County and will continue to do so.

Then, finally, three calls later, the busy Englebert was on the phone explaining why he’d put the item on the agenda to begin with and what he’d like to see happen. He also serves as the town board chair for Forestville, which recently hired a contractor to spray eight miles of township roads to knock back wild parsnip with a DNR-recommended herbicide.

It’s only the first year the town has done it. “We didn’t used to have that weed,” Englebert said, but the town has been dealing with another prolific non-native – phragmites – for years. Englebert said he wanted to extend management of the plant to state highways. After not really getting an answer at Highway Safety, he pursued the issue at the Soil and Water Conservation District (SWCD) committee meeting.

There are 11 municipalities total in Door County that have adopted noxious-weed ordinances such as Forestville’s, said Samantha Koyen, an SWCD conservationist who heads the Invasive Species Team.

Those ordinances mean that those municipalities take the control of invasives seriously. So does Koyen’s team. Their top four terrestrial, non-native targets are phragmites, teasel, Japanese knotweed and – wild parsnip. And this year? Wild parsnip has been prolific, Koyen said.

“It’s not new; it’s just been taking off recently,” she said, adding that one plant is capable of producing 1,000 seeds.

This year, the SWCD has had 25 acres of wild parsnip chemically treated, the majority of that acreage in southern Door County, where the plant is more abundant. Two seasonal employees whose work is paid for, in part, by a $10,000 donation from the Door County Highway Department have also shovel-cut the plant by hand on another 10 acres.

“It’s been amazing to have these funds available,” Koyen said.

John Kolodziej, Door County Highway Department commissioner, was out all week when the phone calls for this story were being made. He’d no doubt add more.

But as of today, the status of wild parsnips on state highways is that they exist, particularly south of Sturgeon Bay, and “as of right now, nothing is being done on the state highway” short of mowing, Koyen said. Annual mowing along state highways does damage some of the plants in some places if it’s done at exactly the right time: during the early summer after the emergence of flower heads but before the seeds enlarge. Otherwise, mowing only exacerbates the problem by helping to scatter the seeds.

“So next year, I’ll be engaging with DOT,” Koyen said – learning about funding, possible grants and in-kind work on the ground that her group can partner on with a state agency that she’s found to be responsive and easy to work with.