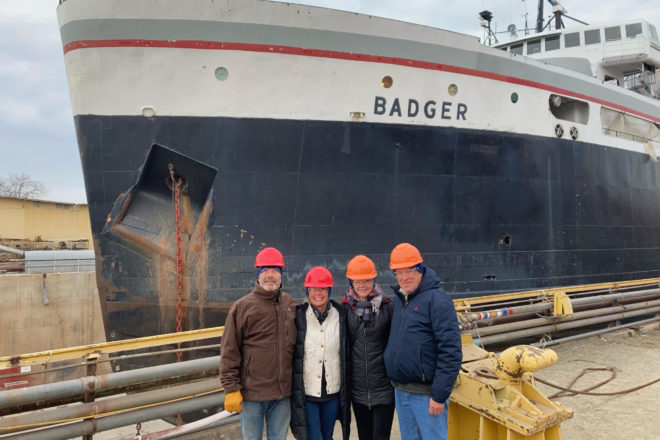 A recent family gathering for the holidays included a tour of the Fincantieri Bay Shipbuilding dry dock in Sturgeon Bay for the extended family of the late Ray Christianson, who once ran the yard.

Susan Shannon, great-niece of Christianson, who served as the Christy Corporation’s president when the SS Badger was constructed, said she wanted her family members to see the historical steamship up close while it was in dry dock this fall for maintenance work. She gained clearance from Fincantieri staff just before Thanksgiving.

“For our little extended family, it was pretty meaningful,” Shannon said. “We didn’t actually get on the ship. We just walked beside her and got a sense of the scale and felt nostalgic.”

She said it was a “feel-good moment” for her, her cousins and younger family members.

Shannon also said it was great that Carl Christianson, grandson of Ray, could talk to family members about the ferry and the work that went on at the shipyard and dry dock back when they had separate owners.

“Seeing the Badger, to me, was kind of like a busman’s holiday,” said Christianson, who had enjoyed a career in the marine business. “We walked the grounds alongside the Badger; it was a nice tour. It was short, but it was wonderful to see the floating dry dock and the amount of work that they have down there. It’s pretty impressive.”

Christianson said the family members did not go aboard and could not see all of the ship because sections of the hull are covered in tarps for sandblasting. He said it was interesting to see that the enter rudder assembly was out of the Badger at the time.

Christianson knows the shipyard and the marine business well because his father, Roland Charles Christianson, worked as a manager at the Sturgeon Bay yard. Carl worked there for part of a year until moving to different locations and companies within the marine industry. He sometimes rode the Badger to or from yacht-delivery assignments for the Manitowoc-based Burger Boat Company, and because of his relationship to Ray, he was often welcomed into the wheelhouse.

Years ago, Christianson recalled, many shipyard workers – like some of his predecessors – milked cows in the early morning, punched in for their shifts and then went home to tend to the cows again. He and retiree Richard Hannemann, who spoke to the Peninsula Pulse earlier this fall, recalled that when one business, such as Christy Corporation, had less work, workers would find work nearby at Sturgeon Bay Dry Dock or with a local steel purveyor.

Fincantieri has since united the various aspects of the business at the site in Sturgeon Bay. Christianson said he’s impressed with the way Fincantieri has positioned itself as a leader in the industry in the Great Lakes, as well as worldwide.

And he remains impressed by how his grandfather, Ray Christianson, became trusted enough at the shipyard and was a good enough friend to Leathem Smith that Christianson became president when Smith died in a boating accident in 1946.

“Ray took the job over and did a successful bid for getting those two ferries,” Carl Christianson said of the SS Badger and SS Spartan. He said steel prices jumped up between the time when the Christy Corporation won the bid and the actual construction, but his grandfather recouped some profits on the job by finding ship propulsion units at a good price.