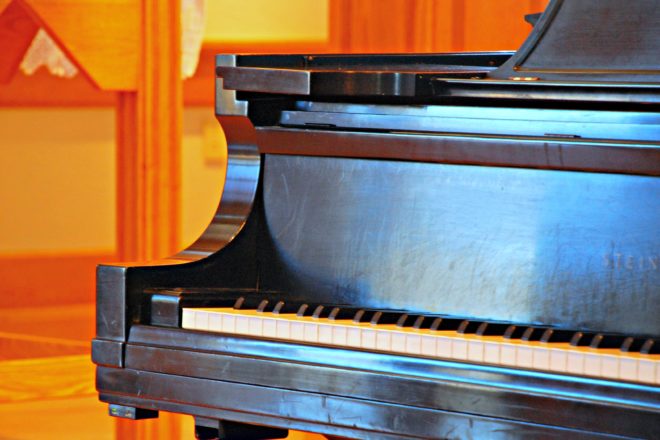 In December of 1995 the Peninsula Music Festival purchased a nine-foot Steinway concert grand piano. Why, you might ask, would a three-week music festival need its own piano? How hard can it be to find a piano when you need one? Well, in the 44 seasons prior to the purchase of the Festival’s piano, there were problems securing and getting a piano to Door County that met the high standards and needs of the Peninsula Music Festival. Often, even after obtaining a piano, the instrument would arrive with problems. Some of you may have even been in attendance when there were concert delays due to issues with the piano. The Festival even paid a tuner/technician to be on standby until the piano soloist performed.

The professional music world is a small world and a concert pianist cannot bring their instrument with them like a violin soloist. The piano soloist relies on the hosting orchestra to provide a quality instrument, professionally tuned and maintained. It may be hard to believe, but this is written into the contract of every piano soloist booked for a concert. So, the problems with pianos at the Peninsula Music Festival were well known in the close circle of professional pianists.

Grammy Award-winning pianist and Peninsula Music Festival board member, John Browning, with the approval of fellow board members, headed up a committee to look into the possibility of purchasing a piano for the Festival, 24 years ago. He traveled to Steinway & Sons in New York, but found nothing to his liking. At Steinway, however, he was told about a wonderful piano that was currently on loan to the Minnesota Orchestra.

Browning made two trips to Minnesota in his quest to secure this instrument and after much negotiating back and forth with Steinway, the two-year-old concert grand piano was secured for the Peninsula Music Festival. The Minnesota Orchestra was none too pleased, but their loss became a splendid gain for the Festival and Door County. 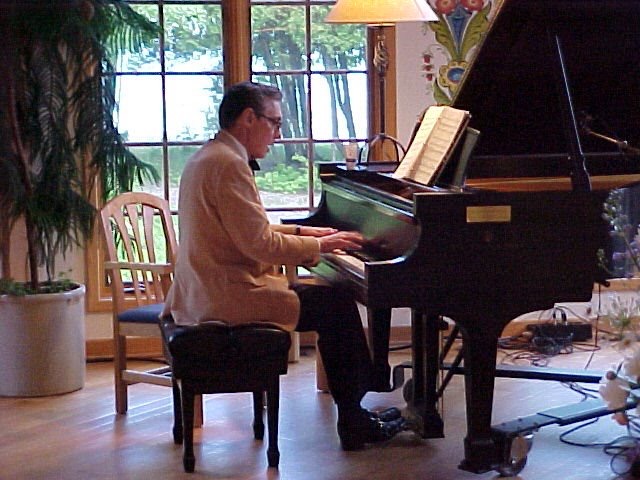 The next step was to pay for the piano. A Steinway concert grand piano does not come cheap. Loaning the John Browning name to the project helped the Festival secure donations and low interest loans from patrons to cover the cost of securing the new piano.

We had the money; the piano was on its way, but where to put it.

At the time of the piano purchase, the Peninsula Music Festival office was located in the old Ephraim Village Hall – not the ideal place to house a Steinway. We had to find a location that would be able to be kept at a fairly constant temperature, where the piano would be safe, and the board wanted year-round access to the instrument for possible fundraising events or chamber concerts.

Right around the time the Festival was purchasing the piano, Björklunden Lodge had just completed construction following a fire that destroyed the original historic building. John Perkins and Ann Hodges, both musicians and strong supporters of the Peninsula Music Festival, had been hired to oversee the new Lodge so the Festival approached them to see if room might be found for the piano. After consultation with Lawrence University, an agreement was reached. The Festival’s piano would grace the great room of Björklunden Lodge for much of the year, where it would be well treated and limbered up occasionally.

On Thursday, June 13, 1996, a small party and reception was held to unveil the piano at Björklunden. In attendance were the 30 people who helped finance its purchase. It was a thrill for everyone to hear John Browning play the piano he “discovered.” At the reception he was thanked for his efforts in finding the instrument for the Festival and I had the pleasure of dedicating the piano to Browning’s mother, Esther Browning. To this day, a permanent brass plate graces the side of the piano that reads, “The Esther Browning Piano.”

Today, Esther is housed at Shepherd of the Bay Lutheran Church where pianist Judith Jackson plays her for services. The Peninsula Music Festival also presents its annual February Fest at Shepherd of the Bay where the piano is often used for those concerts. Each August she makes her annual trek to the Door Community Auditorium and back to the church at the conclusion.

The Esther Browning Piano celebrated her 25th birthday last year and with age has come some need for repairs. Last year she received a new set of dampers and this year she will sport new hammers for the 66th season. During the next offseason she will have work done to her casing, which shows the wear and tear of being transported back and forth. All of these repairs have been done by the Festival’s piano tuner/technician Peter Nehlsen of Potluck Piano. Donations have covered all work done so far, but additional donations will be sought to cover the work on the casing.

There are three opportunities to see and hear the Esther Browning Piano up close and personal during the 66th season of the Peninsula Music Festival: opening night, Tuesday, Aug. 7 with pianist Inna Faliks; Saturday, Aug. 18 with Andrew Armstrong; and closing night, Saturday, Aug. 25 with Spencer Myer. Join us – Esther would love to meet you.

The 66th season of the Peninsula Music Festival is Aug. 7-25 at the Door Community Auditorium in Fish Creek. Tickets are $35-$65 and $10 for students/children. For tickets or more information, call 920.854.4060 or visit musicfestival.com.