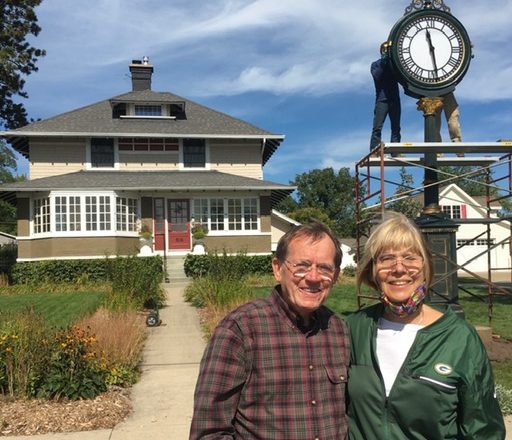 Vitses enhance their property – and the neighborhood – with Old World charm

When Gary and Lonnie Vitse met in Colorado in 1972, Gary was already an avid clock collector.

“That’s when I should have known better,” Lonnie said with a laugh about the man she’s been married to for 46 years. “He had a [Ford] Pinto – a green hatchback – and 300 clocks in his mom’s attic.”

Through the years, though, Gary has refined his collecting approach.

“My interests have changed,” he said. “I saw my future in quality, not quantity.”

An example of that quality is now on public display. The Vitses recently installed a Seth Thomas clock – more than a century old and 18 feet tall – in front of their Memorial Drive home in Sturgeon Bay.

“These clocks develop a life of their own,” Vitse said. “People love them, and communities really take pride in them.”

When the Vitses are outside, people regularly stop to talk about the double-dial clock set on a concrete base.

This Seth Thomas clock – one of 213 made – spent its early life in front of a jewelry store in Pittsburg, Kansas. Then Vitse said it moved to the Chicago area for 22 years before coming to Door County.

“Conditions of my buying it were rigid,” he said. “I couldn’t discuss where it came from or how much I paid for it, but it was two gentlemen making a deal.”

With the help of a Sturgeon Bay friend, Kevin Sullivan, Vitse borrowed scaffolding, rented a trailer and hired a crane to dismantle the clock and the timing movement in Chicago in order to haul it home. It was running when it was dismantled, and Vitse worked on it himself before hiring a crane to mount it on its new base.

“Restoring it meant mainly cleaning it,” he said. “I may not be the best at repairing things, but I know enough not to wreck them.”

Through the years, Vitse has educated himself through trial and error, Lonnie said.

“He’s learned restoration by just doing it,” she said. “He has an incredible knack of running into someone who has the parts he needs or will help him.”

The Vitses prepared for the clock’s placement by designing a full-sized, structural model of the clock out of lumber and cardboard. They moved the model to several locations on their property before deciding on its exact location. The clock faces the Sturgeon Bay shipping canal in front of their home.

“We did it so we could sit in the house and see it, and someone driving or boating by could also see it,” Lonnie said. “Boat [drivers] who know us even honk.”

The clock operates on 180 pounds of weight.

“That’s what drives the whole thing,” Gary said. “It’s like a car engine.”

“It’s very complicated,” he said. “Every once in a while, there are problems, and you have to service it. It has to be set by a pilot dial. You don’t see the dial. It’s in the back of the clock.”

Oil is required to lubricate the movement, and the motion works behind the dial to move the hands. The original dials on Seth Thomas clocks were glass with painted numbers, Vitse said, and four light bulbs illuminate the dial at night and on cloudy days.

“We keep it lit until 10 at night, and it turns back on at 4 in the morning,” Lonnie said.

The Seth Thomas name symbolizes value and excellence of craft, said James Campbell, a clock and watchmaker who’s also the research library and maintenance supervisor of the National Association of Watch and Clock Collectors (NAWCC). The clock requires a weekly, manual winding.

“Many people tended to electrify them,” Campbell said. “It’s nice that [the Vitses] have kept it original.

“Not only are they an excellent time keeper,” he said, but “they are an incredible piece of furniture. They can do nothing but add to your property.”

Street clocks were originally designed so that people walking or driving down a street could see the face of the clock and set their pocket watches to the correct time, Lonnie said.

As a NAWCC member, Gary has hobnobbed with clock aficionados for years, and the couple frequently attends national conventions and has traveled across the country to examine and purchase clocks.

“The wonderful thing about collecting is you meet people that you remember for life,” Gary said.