A tree that is native to northeastern America, and nowhere else, reigns supreme as one of the world’s overall most beautiful broad-leaved trees. Drip some pure maple syrup onto your pancakes or waffles and you will have tasted one of the finest and most healthful forms of sweetening known to humans. We Wisconsinites, along with the folks from Vermont and New York, can be proud that the Sugar Maple has been chosen as our state tree. 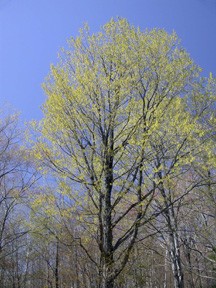 This large Sugar Maple tree is full of flowers before the leaves emerge.

This outstanding species is without a doubt the best known and most important maple in the U.S., if not the entire world today. We can thank the Native Americans for discovering the general process of evaporating the sap to obtain the sweetened syrup and sugar. More than 10 million Sugar Maples will be tapped this spring in our country, the most being in Vermont.

The tree’s hard, smooth-grained wood weighs about 44 pounds per cubic foot and is renowned for its use in fine furniture, floors and musical instruments. Certain parts of high quality pianos are made of this prized wood. Many of you may have a wooden rolling pin made of maple. About 50 years ago my mother gave me a large maple cutting board, in the shape of a pig, handmade and presented to her by her uncle Frank Cmejla from Algoma for a wedding present in 1926. We use it often and it’s as good as new. How we treasure this heirloom!

As much as we look forward to the flowering and leafing out of trees, even with there being more than a foot of snow still remaining on the ground today, we also admire their distinctive character as revealed in their bare-bones winter silhouettes. One of our favorites is an open-grown Sugar Maple that consequently has a broader form as well as lower branching. Occasionally we will take a slightly longer route just to get another look at our “friend.” Its trunk is relatively short compared to the tall telephone pole-like trunks of forest-grown maples. There, one of these hardwoods can attain the height of 35 feet in 20 years.

The dainty flowers of a Sugar Maple hang downward and are wind-pollinated.

Moist well-drained slopes are their best habitat where they do well with American Beech, White and Yellow Birches, and Eastern Hemlock. They will not tolerate wet, acid soils. Prime growing conditions can result in a 120-foot tall Sugar Maple having a diameter of five feet. The largest known specimen in our county today is 16 2/3 feet in circumference and 86 feet tall, this being close to the state record.

Deer are very fond of young maple saplings and eat large quantities of them in winter whenever they can find them. As a result more and more Maple-Beech woods are slowly reverting to being predominately American Beech woods. Good examples are Rock Island and Peninsula State Parks, where it is virtually impossible to locate small Sugar Maple as well as Eastern Hemlock saplings. As long as the deer populations remain high, the total number of maples will gradually diminish until the day in future years when they will be quite rare here. Deer do not eat small beech trees, only the nuts of the mature trees.

Many people will look up at the first hint of green on the maple trees this spring and think they are seeing the emerging leaves when in reality they are viewing the tiny, inconspicuous, greenish-yellow flowers. They are said to be “perfect” flowers in that both the stamens and pistils (male and female) are produced on each flower. Certain trees, such as ashes, willows and aspens have male flowers on one tree and female on another. They are said to be dioecious (dye-EE-shus) trees. 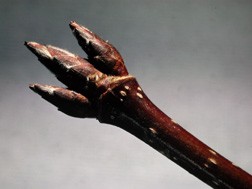 The small three-parted Sugar Maple buds are easy to identify.

Quite obviously a Sugar Maple tree, come fall and winter, that has lost its leaves is not dead. It is dormant and very much alive. Call them economical if you wish, for by autumn about 90 percent of the minerals in their leaves has been transported downward and stored in the tree’s lower tissue. With the warmth of spring, enzymes within the tree are stimulated into action. The tree’s stored starch begins to change into sugar, which, through a laborious and time-consuming series of events, may end up on your flapjacks in the form of syrup.

A large maple tree develops as many as two million leaf buds before the end of its growing season. Approximately one-half of them will open the following summer while the remainder continues to exist as a living insurance to the tree. In case leaves or even large branches are blown or broken off during a storm, the nearest undeveloped buds open to take the place of those destroyed.

The buds on maples are produced in threes at the end of each twig. The tallest of the tightly packed buds is in the center flanked by two shorter ones. All winter long the buds have been protected from the elements by weatherproofed bud scales. Come spring, most of these protective bud scales will fall off, revealing the tiny developing leaves and/or flowers and leaving distinctive bud scale scars encircling the twig. The interval between each set of bud-scale scars (rings) indicates one year’s growth. The intervals on lower or inner twigs are usually considerably shorter than those on upper or outer portions of a tree where more light is received, thereby producing faster growth. 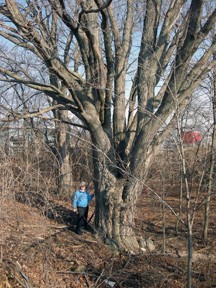 Surely the Sugar Maples through the years have taken over as the number one street-side tree in the U.S. due to the large but unfortunate die-off of millions of American Elms. Perhaps the maples tend to be more of a small town tree than a large city tree in that they are very sensitive to the air pollution produced by heavy traffic and industry. A beautiful and smaller tree, the Gingko, which is virtually immune to pollution, is becoming more widely planted in cities.

Regardless of where you live in this region, find yourself an imposing Sugar Maple, watch its developments from day to day, and let it be your spring parade marshal, steadfast and strong, yet delicate and delicious in a sense, king of all the broadleaved trees.