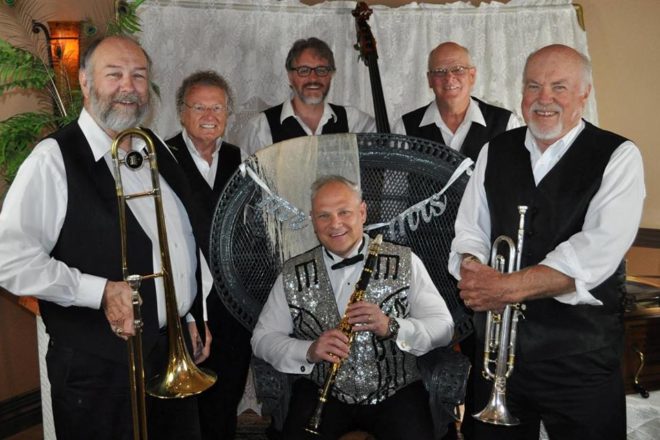 Green Bay may be more than 1,100 miles from New Orleans, but that distance hasn’t stopped one group of Northeast Wisconsin musicians from building a brand on Dixieland jazz and infusing its performances with traditional Mardi Gras elements, like a second line and bead tossing.

The six-piece Talk of the Town, led by jazz clarinetist Kevin Van Ess, is best known for its dedication to honoring traditional New Orleans jazz and swing standards, and the legacy of such great musicians as Pete Fountain, Louis Armstrong, Duke Ellington and Count Basie.

Van Ess, who considers Talk of the Town to be almost an “all-star band” of some of Wisconsin’s top musicians, has been dabbling in jazz since childhood.

“As a kid, I would listen to thousands of hours of records from Pete Fountain. He was a legend down in New Orleans and he just passed away about two weeks ago [Aug. 6, 2016]. He was the top jazz clarinet player in the world for 13 years, he was on the old Johnny Carson sixty times, and played for presidents and the pope and was well recognized,” Van Ess said. “It’s kind of like if you’re a basketball player as a kid and you look up to Michael Jordan, this was my idol and where I really learned how to play just playing off of his records.”

In the years since, he has become an award-winning music educator who has been featured on more than 30 recordings, including four with Talk of the Town: A Closer Walk with Kevin Van Ess, Honky Tonk, Mr. Licorice Stick and Jazzman. Fifteen years ago, he met Fountain in New Orleans and over the following years, performed with him several times, including on the lead float of Mardi Gras parades.

Those experiences have enhanced the experience for Talk of the Town concertgoers. Van Ess is quick to point out that the band’s performances go beyond “just watching a jazz group.”

“You’ll see the band out in the audience, you’ll see people come up on stage. We do a lot of stuff,” Van Ess said. “I actually do one thing where I take the clarinet down piece-by-piece straight down to the mouthpiece and play a song just on a mouthpiece. You’ll see us do a Mardi Gras thing where we’ll go out into the audience and throw the beads. We’ll do what we call a second line, down in New Orleans it’s like a parade.”

After a sold-out 2015 show at Birch Creek Music Performance Center in Egg Harbor, Talk of the Town will return to the venue this Saturday evening to close out their 2016 summer tour. In the process, hopefully becoming what Van Ess explained as the inspiration for their namesake.