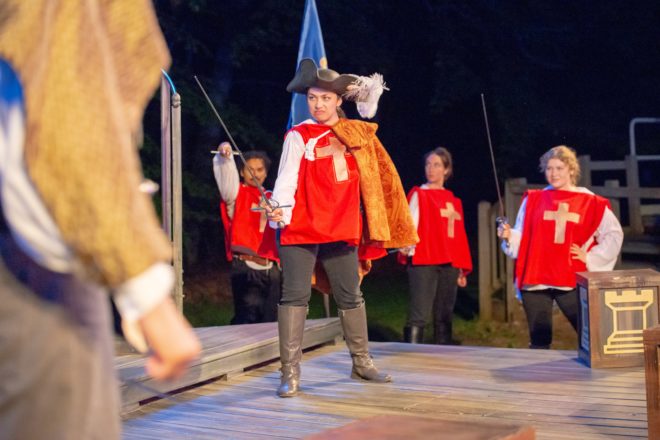 Jussac (Christine Saenz) squares off against the Musketeers with the help of more of the cardinal’s guards, (from left) Jamey Feshold, Katherine E. Norman and Alayna Perry. Photo by Heidi Hodges.

One of the main distinctions of live theater performances is that no camera guides your viewpoint: You get to choose where you look on stage. And anywhere you look in The Three Musketeers: An Adventure, with Music, you’ll find adventure, playfulness and characters who are fully engaged and primed to delight.

Door Shakespeare’s garden stage – wrapped in dreamy lighting and dominated by a larger-than-life tree – provides a perfect backdrop for stepping back in time through Alexander Dumas’ classic tale. This rendition, adapted by Joe Pine in 2016, is enhanced by original music from Scott McKenna Campbell, who portrays the slightly daft, guitar-playing Planchet.

While the three guide d’Artagnan on a path to becoming a Musketeer, they are sent on a mission for the queen (Na’Tosha De’Von). Despite the play’s overall charming adventure, it takes d’Artagnan through real growth and reexplores familiar characters in a refreshing way.

An unfortunate aspect of live theater enters when on-stage actors who are not in the main action stand off to the side, staring at nothing for a few minutes while they wait for their line. That does not happen in The Three Musketeers.

Whether the queen’s aide, Constance (Christine Saenz), waits outside her room, or the Duke of Buckingham (Jamey Feshold) waits inside it, the actors are in character and actively performing anytime they’re on stage. Every subtle whisper or sign of the cross gives the humorous play a touch of detail-driven sophistication.

This attention to detail is also very much in evidence during the well-choreographed fight sequences that I could watch five times and still see something new. Under the direction of Christopher Elst – a certified teacher of the Society of American Fight Directors – each sword, chair and beer mug is a weapon of destruction that more than once garnered a gasp from the audience.

As the stage lights rose in the dimming sunlight, the flickering candles in lanterns and slight shifts in direction and color styled the performance as well as the costumes. With some actors in multiple roles, the outfits play an integral, well-done role in helping the audience make the distinctions.

The Three Musketeers: An Adventure, with Music is a delightful retelling of a classic story and an enchanting way to spend a night in Door County, discovering dashing characters and daring plots lurking beneath Door Shakespeare’s tree branches.

The show runs through Aug. 27 on Tuesdays and Thursdays at 7:30 pm and Saturdays at 5 pm. Purchase tickets at doorshakespeare.com.