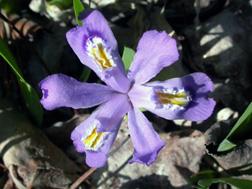 A single Lake Iris found at the Ridges Sanctuary. Photo by Roy Lukes.

There is a wildflower display that will begin in northern Door County later in May that is dearly cherished by many people. It’s a strikingly rich mosaic of colors and shapes that can include the Lake Iris, Trailing Arbutus, Gaywings, Creeping Snowberry, Twinflower, Canada Dogwood, Clintonia or Blue Bead Lily and others. In my estimation there are few wildflower displays in the entire Midwest that can match or surpass this extravaganza. If there is one very special plant among this showing that deserves added attention, it’s the Lake Iris, Iris lacustris, which simply means Iris of the lake. Even though many references and people prefer to call it the Dwarf Lake Iris, I prefer not to. There is nothing in its scientific name referring to dwarf.

Botanists would say that the “type locality” of the Lake Iris is Mackinac Island where this rare plant was first found and described in 1810 by the famous Philadelphia naturalist, Thomas Nuttall, while on his way to botanize in the North Country. One of the broadest shoreline expanses of this Iris is on Bois Blank Island at Point Detache (where I’d dearly love to explore someday), southeast of Mackinac Island. (Mackinac, by the way, is pronounced “MACK-i-naw.”) The largest site for this federally threatened plant is at Thompson’s Harbor ESE from Rogers City in Presque Isle County in the northeast part of Lower Michigan. Rogers City is the site of this country’s largest limestone quarrying area, where thousands of tons are shipped out annually by boat. Obviously the underlying bedrock, being limestone or “dolostone” (which is around 55 percent limestone and 45 percent dolomite) is highly critical to the Lake Iris’s success. 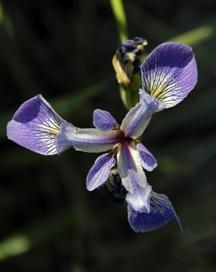 The tall Blue Flag Iris, which likes to grow in wetlands. Photo by Roy Lukes.

Fortunately, some of the 30 or more Door County sites are located on state or county-owned property and also at The Ridges Sanctuary. The largest site is considered to be at Newport State Park. You will have to do your own exploring to be able to enjoy this unique and cherished area. Two favorite sites of ours are on Washington Island, one at the Jackson Harbor Ridges and the other along the nearby Indian Point Road. An excellent little site can be easily enjoyed at Peninsula State Park along the Hemlock Trail bordering the Weborg Marsh.

Examine a map of the Lake Iris’s distribution and you soon realize that here is a flower of the low portions of one of the world’s great geological landmarks, the Niagara Escarpment. The constant refrigerating effects of the Northern Great Lakes, namely humidity and coolness, are prime necessities in the lives of these outwardly dainty but extremely hardy wildflowers. Remove one of its basic requirements and the plant is doomed.

Describe the intense blues and purples of the Lake Iris, its unusually small size of about 1 1/2 inches in height, the blossom being around two inches wide or even slightly less, and many people tend to be disbelievers. However, seeing is believing, and you’ll find yourself carefully kneeling down to drink in the beauty of these uncommon wildflowers. Like its other much larger Iris relatives, such as the Northern Blue Flag, Iris versicolor, the Lake Irises have extensive sprawling rhizomes just beneath the soil surface. Both leaves and flower-stalks are produced directly from the rhizomes. During the period when the plant is in full flower, or at anthesis (an-THEE-sis), the lance-shaped leaves are between 1 1/2 to 2 1/2 inches long. Later, after the flowers have wilted, the leaves extend to six or seven inches. Come fall, the foliage loses its chlorophyll and bleaches to a whitish color. One of the most interesting and durable of Robin nests that I have seen, this one at eye level in a small Tamarack tree at The Ridges, was constructed largely of the previous year’s bleached Lake Iris leaves.

One would think that such extensive colonies of hundreds to thousands of these rare plants would produce scores of the typical three-parted seed pods, and that one could simply collect and propagate the seeds. Not so! In the 27 years that I worked at The Ridges Sanctuary I closely observed these plants and experienced only two or three years when the seed pods were fairly abundant, and I don’t know why. 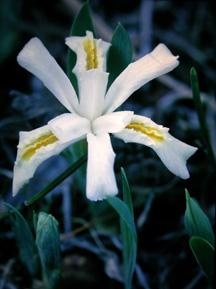 A fascinating thing happened years ago when a small volunteer crew and I were removing a very rotten wooden Cedar bridge that ran across one of the swales at the Ridges. Included were a dozen or more feet, along with the stringers to which the decking had been nailed, that had been laid on the very wet spongy ground at the approaches to the bridge. It was always a huge chore in knowing what to do with the rotten lumber. One of the volunteers, Paul Phillips, asked if he could have a few of the nailed-together sections of the approach material that had been lying on the ground, so he brought his trailer from where he and his wife Gretchen lived along Glidden Drive and placed them close to their home on the sandy partly shaded top of one of the dunes so they wouldn’t track sand into the house. A few years after he had set down the old bridge material, much to the surprise of Paul and Gretchen, a beautiful little patch of Lake Irises had taken root and were doing very well. Unknown to anyone when the old boards were removed was that many very tiny rhizomes were growing between the rotten boards and those rare little Lake Irises soon had a new home!

The Lake Iris is described in botanical terms as being an endemic (en-DEM-ic) species, meaning that it is confined to one very specific area in the world. As mentioned previously, this extremely rare, federally threatened wildflower is confined to northern Door County, a small area in Brown County, and in the southern coastal regions of Upper Michigan as well as the Lake Huron shore areas and a few small islands of northeastern Lower Michigan. It also grows in Ontario on Manitoulin Island and on the Bruce peninsula. Don’t confuse the Lake Iris with the tiny Crested Iris of the Great Smokey Mountains. Both are very small plants but otherwise distinctly different.

Count yourself very fortunate to be able to enjoy one of the most exquisitely beautiful and rare harbingers of spring in our great county, the Lake Iris.