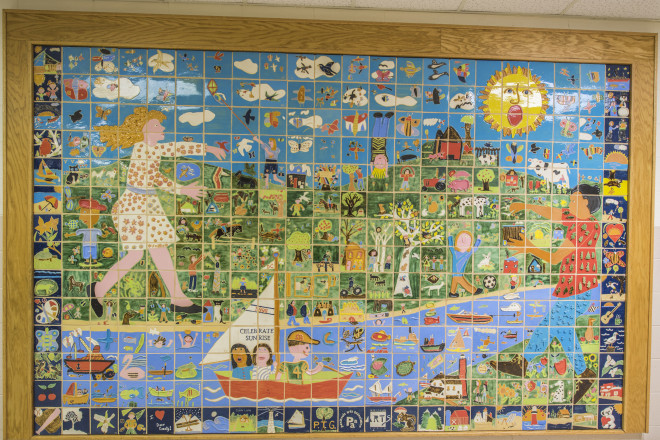 When I visit Gibraltar School and walk along the hallway past the old gym, I look on the bottom row of the “Visions of Peace” tile mural created by elementary students in 1997 to find mine, one that I made after teaching Kurt Vonnegut’s antiwar novel, Slaughterhouse-Five. 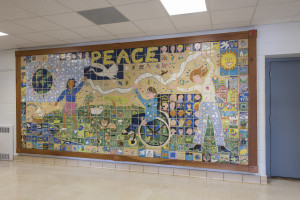 “Visions of Peace”
at Gibraltar School. Photo by Len Villano.

My sense of pride is no different than that of students involved in the project at Gibraltar, or in any of the murals created under the guidance of David and Jeanne Aurelius in other mainland Door County schools.

Joan Blackwood was then the Friends of Gibraltar Special Projects Coordinator for the “Visions of Peace” mural.

“It was a rare day that I did not encounter a child gently touching a tile, a volunteer proudly showing a student the tile he had made, and the student then pointing out her tile,” she said.

At Southern Door, art teacher Barb Schriner-Schmitt initiated the “Opening the Door and Soaring to New Dimensions” mural project, again with the Aureliuses.

“I see young children especially drawn to it to examine it closely,” she said. “I think the students involved have a special pride for their part of the group effort.”

David and Jeanne Aurelius, well known since 1976 for their work at Clay Bay Pottery near Ellison Bay, are also recognized throughout the state for their excellence as artists in residence, coordinating projects that bring dozens, sometimes hundreds, of students, teachers and volunteers together to complete a permanently installed tile mural in celebration of their community.

In 1994 the Clay Bay potters were invited to Lake Bluff Elementary School in the Milwaukee suburb of Shorewood to supervise 600 students as they created a tile mural, “Nature and the Neighborhood.”

Including that first project, the Aureliuses have undertaken 21 school murals, the most recent in 2013 for the middle school in Phillips, Wisconsin. In each finished piece the Aureliuses find visions and values unique to a community and incorporate them into the design. 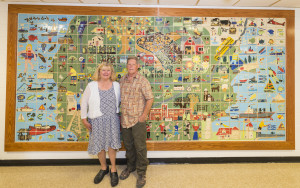 “We tell stories by the mural,” David said.

Elements of the community and the environment create a big picture, Jeanne added, “and we let the small details fill in.”

The completed large-scale murals are constructed with six-by-six inch painted clay tiles that are glazed and fired before being permanently installed on a wall in a public area of the school. Typically the work is six to seven feet in height and 12 to 14 feet in width. While many of the murals are elementary school projects, some involve middle or high school students.

Because of the complexity of the creative process that goes into a tile mural, the potters explain, meetings and planning sessions are essential for bringing about well-laid plans that will lead to the project’s success.

Funding may be drawn from school budgets, corporate sponsors and community donations. State Arts Board grants, unfortunately, are no longer a significant source of financing. Most often parent-teacher organizations are instrumental in fundraising.

A residency generally requires two to three weeks. Usually, Jeanne explains, the couple will go into a school in early fall for preliminary planning and then return a month later for the technical work of the mural. While students most often work in art classes, sometimes projects cross curricula. For example, the Gibraltar Middle School “Wild About Water” mural was introduced in science classes, and under the direction of then state Poet Laureate Ellen Kort, students in English classes wrote poetry to be included with the artwork.

“The Four Seasons of Door County” at Sevastopol School. Photo by Len Villano.

However, school murals not only depict a vision of a community, but their actual creation is the work of the community also, the efforts not only of students, but of volunteers, often parents and grandparents, and sometimes of other people in the neighborhood as well.

Jeanne recalls that for the Southern Door mural, then Door County Sheriff Terry Vogel painted a police car tile, and Sue Marchant, a grandmother of students and an owner of the nearby grocery store, “came in almost every day to paint.”

Schriner-Schmitt remembered all the parents and grandparents who “volunteered for entire days or came in after school to help day after day.”

And at Gibraltar, Blackwood noted, “The cooperation between teachers and administrators, parents, students and community volunteers makes each mural memorable.”

Speaking of her experience with the Aureliuses, Blackwood commented, “The best artists in the world cannot lead a successful residence if they do not love children, respect educators, show flexibility, and possess a unique creative ability to make all of those components come together.

“Jeanne and David have all of those traits,” she added, “coupled with incredible artistic vision and talent.”

“From Shore to Shore” at Sevestopol School. Photo by Len Villano.

“The experience of working with Jeanne and David was a complete pleasure,” Schriner-Schmitt said. “The mural has become a beautiful focal point for our main elementary office lobby area.”

She believes that the mural “helps to keep students involved in visual art and their creative vision thriving.”