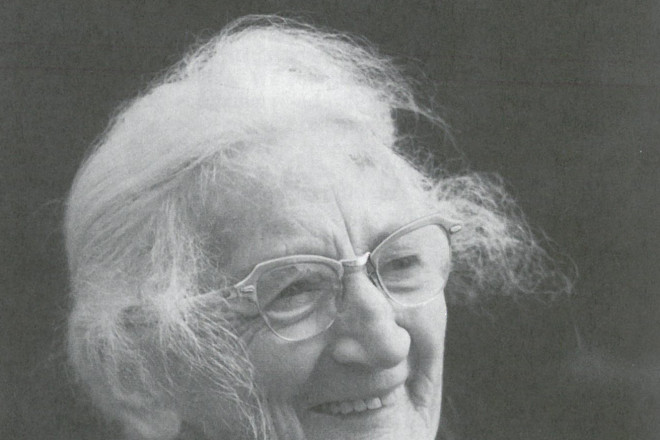 Most people in Door County are likely familiar with the name Emma Toft. Some of them probably know that the Baileys Harbor house associated with her was, until recently, occupied by the Red Geranium Gift Shop. But Emma, “Wisconsin’s first lady of conservation,” has been gone for 33 years, and memories fade. 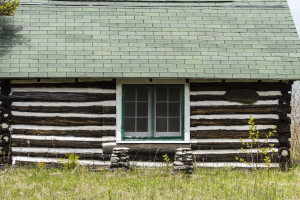 Many may not be aware that Emma came from a large family and over the years they lived in several houses. Even fewer may know that only by a quirk of fate were there any Tofts in Door County.

When Emma’s father, Thomas, and two of his brothers arrived in Racine from their home in Denmark in 1863, they discovered that their last name, Jensen, was very common. Wanting to stand out from the crowd, they changed it to Toft, a name common in the area from which they had come. The newly christened Thomas Kresten Toft was 19 years old. For two years, he and his brothers worked in the pineries near Racine. Next, they bought a farm in Minnesota, but by 1871, Tom had sold his interest in the farm and moved to Door County, where he worked as foreman for the Buckley and Wing Stone Company with a quarry at the Point on Mud Bay (now known as Toft Point).

The two-story lodge that housed the quarry crew had three sides of unpainted vertical boards, with a front of horizontal siding. A barn and outhouses were constructed of chinked logs. In 1874, Thomas, then 30, married 16-year-old Juley Anne Panter, the oldest of the eight children of Rebecca and Thomas Panter, who helped establish the Town of Jacksonport. The couple moved into the company lodge at Mud Bay. Juley cooked for the large crew and within the next four years bore four children, William, Olive, Mary and Thorwald, who lived only two months.

When the Sturgeon Bay Ship Canal opened in the 1880s, the Laurie Quarry in Sturgeon Bay became a less dangerous place to load stone, and the quarry at the Point was soon out of business. Thomas Toft acquired some of the land from the company in lieu of owed wages and purchased more at a sheriff’s 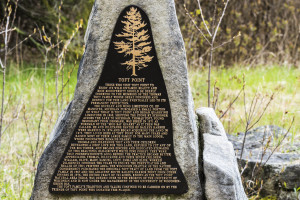 sale and from individuals. Sam, Lucy and Emma Toft were born at the Point. They grew up in the woods and water with their older siblings, doing farm chores and walking two-and-a-half miles to school in Baileys Harbor. When it snowed, their Newfoundland dog pulled them to the village on a sled made by their father.

In 1892, Thomas Toft purchased for $400 the large Miles Carrington home in Baileys Harbor on the northwest corner of Main Street (Highway 57) and Doc’s Hill (Bluff Road), so called because Doctor Voight lived on it just below the bluff. The youngest Toft child, Elsie, was born there that year. The house shared a well with its neighbor on the north, a two-family home that had been built by Joel and Alice Carrington as a “temporary” residence after their original home was lost in the great fire of 1868 that destroyed most of the village.

In 1900, William Toft bought the Joel Carrington property for $400, and it was the home he brought his bride, Anna Hafner, to five years later. Each side of the building had a kitchen and parlor downstairs and a bedroom upstairs. An attic ran across the back. In a three-part memoir written in 1992 by William’s daughter-in-law, Ruby Voeks Toft, she described the home as having wooden floors, ash wainscoting in the kitchen added by William, and a front door with a “beautifully etched waterfall scene.” A room on the right front of the house served as the village post office when William was postmaster from 1918 to 1939. When William’s son, Thor, and his wife, Ruby, were preparing the house for sale in the 1980s, one of the former post office walls was found to be covered with graffiti – names of long ago teenagers like Bernice Hartwig and Helen Herbst. It is this “saltbox” house which, years later, became the Red Geranium.

Both the Toft homes had “stovewood” barns behind them. In 1900 Thomas Toft had also purchased 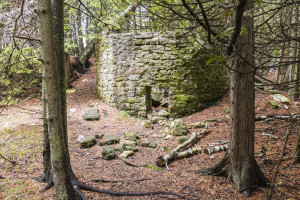 Government Lot Three, about 40 acres, on top of the bluff from Ellen Leist. The family had huge gardens there, raspberry patches and maple trees they tapped for maple syrup.

No additional history of the Thomas Toft house has been found. All the children except Emma married and left home. Emma and her parents continued to live there in the winter, returning to the Point in good weather. In a 2012 interview, the late Florian Kwaterski, who was involved with many local businesses, said that Emma talked him into buying and razing the 17-room family home in the 1960s. He reported that Emma had leased the house next door, formerly the home of her older brother, William, and that she wanted no money for the sale of her family home, just one percent interest on the selling price.

Like her older sisters, Mary and Lucy, Emma taught school for a while, but had begun nurse’s training at Presbyterian Hospital in Chicago shortly before her father suffered a fatal stroke in the fall of 1919. The family felt the stroke was caused by stress over an ongoing dispute about property boundaries that, after more than 20 years, was finally settled in the Tofts’ favor. Emma, the only unmarried daughter, came home to help Juley Anne. Needing income, Emma, Lucy and their mother decided to open a summer resort at the Point in 1920, housing guests in the old lodge where quarry workers and the young Toft family had once lived.

There were three original cabins on the property, and a few more were built. The chicken coop was also turned into a guest cottage, and a lean-to on the south side of the lodge became the summer kitchen. There was no running water, no electricity, no flush toilets and no advertising. But the natural beauty, tranquility and amazing meals fresh from Emma’s garden kept guests coming back to Toft Point Resort for more than 50 years.

The Toft children and grandchildren banded together to ensure that the unspoiled corner of Door County their family had protected for generations would forever remain in a pristine state. The property was sold to The Nature Conservancy in 1967, with life tenancy given to Emma. Today Toft Point is owned by the Wisconsin Chapter of the Nature Conservancy and the University of Wisconsin – Green Bay. The site is recognized by the National Park Service as a National Natural Landmark and was designated a State Natural Area in 1967.

In 2013, The Town of Baileys Harbor purchased the property long known as the Toft House, most recently the site of the Red Geranium Gift Shop, at 8061 Highway 57. How appropriate that it now houses the town information center and the Baileys Harbor Historical Society. We think Emma would be pleased. 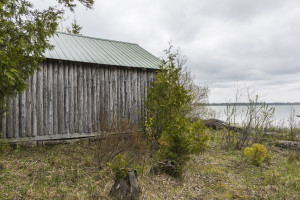 A series of three reminiscences written for the

Toft Point, A Legacy of People and Pines