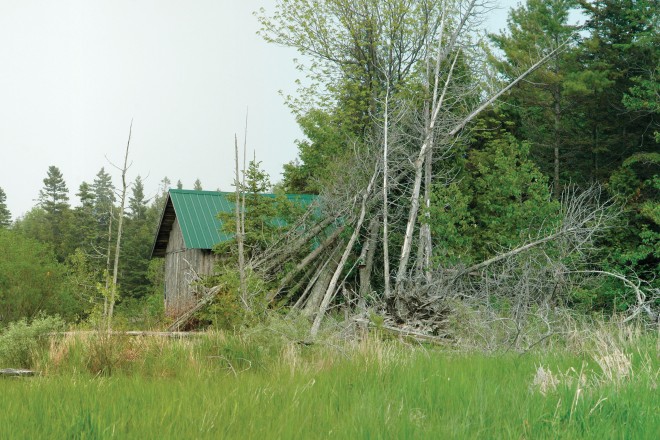 Most Door County residents and visitors, if they know of the Toft Family at all, have probably heard only of “Emma Who Saved The Ridges,” as a Milwaukee Journal Magazine headline once referred to Emma Toft.

Emma was certainly involved in protecting the area known as The Ridges Sanctuary, although many others were equally involved. And, while Emma is the person most often associated with Toft Point, the area preserved by her family, the credit is equally due her parents and siblings.

Emma’s father, Thomas Toft, was born Thomas Kresten Jensen on June 1, 1844 in Denmark. He was one of fourteen children. He and two of his brothers, assuming they had better chances of making a living in the U.S., left Denmark to live in Racine, Wisconsin in 1863.

Upon arrival, the Jensen brothers were surprised to find so many immigrants named “Jensen.” To distinguish themselves, and to honor their home area in Denmark, the three quickly changed their last names to “Toft” (pronounced “tough,” with a “T” at the end).

After working in the forests near Racine for a few years, they bought a farm in Minnesota. In 1871, Tom sold his share to his brothers and came to Baileys Harbor, where he had acquired a position as foreman of the Mud Bay limestone quarry owned and operated by the Michigan Quarrying Company. In addition to managing the quarrying operation and ship loading, he was responsible for hiring, housing, and feeding the workers.

In 1874, at the age of 30, Tom married Julia Anne Panter. The oldest of eight children, Julia was 16 at the time. Her parents, Rebecca Coe and Thomas Panter, had moved to Door County from England in 1862, eventually settling in Baileys Harbor in 1873. Upon marrying Tom, Julia took on the responsibility of managing the “home” life of the men working the quarry at Mud Bay in addition to managing their personal household.

Tom purchased the first of the land the Toft family was to own at Mud Bay in 1875, the same year Julia gave birth to the first of their eight children. While much of Northern Door had been logged in the late 1800s, the Mud Bay area had been left untouched. Tom had fallen in love with the woods at “The Point,” as the family always referred to it, for this reason. The Point had also been spared the fires of 1871, including the October 8, 1871 Peshtigo Fire, which was, until the 1990s, considered the worst forest fire in U.S. history – roughly 1,250,000 acres burned in Oconto, Brown, Kewaunee, and Door counties.

Tom’s position at the quarry lasted until the mid-1880s. The 1882 completion of the Sturgeon Bay Ship Canal quickly brought quarrying operations in Northern Door to an end; quarries had immediately flourished in Sturgeon Bay, where ships could anchor and load more easily than in Lake Michigan’s high seas. Once the Michigan Quarrying Company could no longer meet the expense of wages due, a sheriff’s sale of its land at The Point was held. Toft bought it, and as adjacent land became available over the years, purchased that, too.

Emma was the seventh of the eight Toft children. Born on February 9, 1891, she was the last to be born on Toft Point itself. By the following winter, Tom had purchased a home in town, and the family began its tradition of moving to “downtown” Baileys Harbor for the winter season. While that home is no longer standing, Emma’s brother Will purchased and lived with his family in the home immediately adjacent, which today houses The Red Geranium gift shop. This is the home in which Emma spent the winter months for nearly her entire adult life.

Although the Tofts could easily have supported themselves logging The Point once the quarry ceased operations, because of Tom’s deep love for the land and its trees, none of it was ever logged. Instead, the family supported themselves by “living off the land,” and by selling milk, smoked ham and bacon, eggs, and other produce for money.

Julia had quickly grown to love The Point, too. A New York botanist had come to stay with them one summer, searching for rare plants and studying flowers, and from him, Julia learned the names of the wildflowers she loved. She imparted this knowledge to her children, as well as her great respect for nature and living things. With Tom, she taught the children to deeply respect and live in harmony with their environment.

Thomas Toft died in 1919 as the result of a stroke. By that time, all the Toft children except Emma, who was to remain single throughout her life, had married. Emma had been away from home for several years, attending school and working as a teacher, but returned home to help her mother care for her father after his stroke. She told friends later she vowed at his deathbed to look after her mother and care for The Point the rest of her life. When Tom died, Emma, her siblings, and her mother decided that in order to make what they needed to pay taxes, feed themselves, maintain the buildings they owned in town, and care for The Point, they would start a rustic summer resort.

Rustic it was- the Toft family resort was open for over 50 years, never with any running water or flush toilets, although electricity did come in 1949. Emma lived at The Point every year from late spring until late fall during those years; during the winter, she would frequently hike or snowshoe in from town to check on the land and feed her animals. Many Toft family members, including Emma’s siblings and their children, also spent a great deal of time living and working at The Point, especially in the early years.

Although most of the Toft family children remained in Door County and were actively involved with The Point, Emma is the most talked and written about. Perhaps this is because she spent more time living at The Point than the others, or because she was involved in so many conservation activities and organizations in Door County. Perhaps the reason is her widespread reputation for toughness – despite being considered a very gentle woman – in verbally and physically protecting the land, plants, and animals she loved. Perhaps, or maybe in addition to those reasons, she is the most well-remembered because of the lasting friendships she made with conservationists- including Aldo Leopold and his family and Jens Jensen – as well as writers, teachers, researchers, and students, many of whom wrote about Emma.

The Toft family managed to preserve all of the shoreline and the 325 acres of old-growth forest that they owned. Today, the protected area referred to as “Toft Point” is about 740 acres. The forest on the original Toft family land contains one of, if not the largest, continuous stands of old-growth white pine on the entire western shore of Lake Michigan. The property will always remain undeveloped, serving as an outdoor laboratory, thanks to an agreement reached in the late 1960s between the Toft family, the University of Wisconsin, and The Nature Conservancy. (Emma and some of her special resort guests and friends were still able to live there during the summers well into the mid-1970s.) Although Emma spent the most time at The Point, the entire Toft family, children and grandchildren, deserve credit for the preservation of the area – they were all involved in helping with the resort, paying taxes on the land, and establishing the area as a sanctuary.

Roy Lukes, naturalist with The Ridges Sanctuary for over 25 years and a good friend of Emma’s, wrote in the introduction to his book Toft Point: A Legacy of People and Pines, that “Miss Emma Toft, in later life, felt that she and her people hadn’t done anything extraordinary in working throughout their lives to preserve their forest, the shores, the plants and the wildlife at Toft’s Point [sic]. She said that it was something everyone should be doing. They were only doing what had to and what should be done with their land.”

Emma Toft died at the age of 91 on February 14, 1982 after spending the last several years of her life at the Dorchester Nursing Home in Sturgeon Bay. She kept a small suitcase packed and ready to go at all times for those instances when she was able to convince friends and visitors to “take her home” for visits. Fortunately, many did.