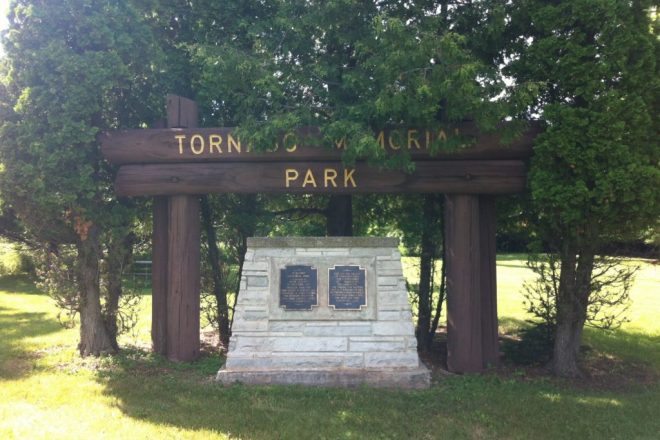 Before the Department of Transportation expanded Highway 42/57 to four lanes and rerouted it around Brussels, nearly everyone entering or leaving Door County passed a little patch of land along the highway called Tornado Park. If you never stopped to read the plaques, you might have concluded, understandably, that the spot marked the site of a tornado’s path.

Instead, it marks the site of Williamsonville, a tiny village wiped off the map by a forest fire on Oct. 8, 1871. The village of roughly 10 acres was home to 77 residents, 59 of whom died in the blaze, including 35 who huddled together in a potato patch near the site, hoping the cleared land would stunt the flames.

The fire advanced rapidly in the dry conditions and high winds of the day, creating what survivors described as “tornadoes of fire.” That inspired the park’s name, but it’s a bit of a misnomer, said Bailey Koepsel, executive director of the Door County Historical Society. “It’s more like a fire whirlwind, or vortice,” she said.

To those facing the flames, the distinction hardly mattered – many believed they were facing Judgment Day.

Koepsel will be one of the keynote speakers at the Forest History Conference commemorating the Peshtigo Fire on Oct. 8 at the Embers 1871 restaurant in Peshtigo. She’ll discuss the Williamsonville Fire, which some thought was caused by tornadoes of fire that leapt the waters of Green Bay from Peshtigo and landed in Southern Door County. That, Koepsel said, is a myth.

“When you go back to the newspaper archives from that summer, you find that the Gardner area was on fire on and off for much of that summer,” she said. “On Oct. 5, there was a fire at the Williamson Mill, and to combat it, they set a backfire, thinking that the same area wouldn’t burn twice.”

Those fires may have lingered in the soil’s subsurface, feeding on dry peat moss until the high winds of Oct. 8 kicked up the fire.

As it raged, seven men sought shelter in a well, but only five survived. The well is now marked by a sign at Tornado Park, the first park created in the Door County Park System in 1927. Two bronze plaques, located under the Tornado Memorial Park sign, memorialize the lives both lost and affected.

In 1929, area schoolchildren, under the supervision of A.E. Dolittle, planted 1,000 pine and balsam trees at the park. The Williamsonville settlement was never rebuilt.