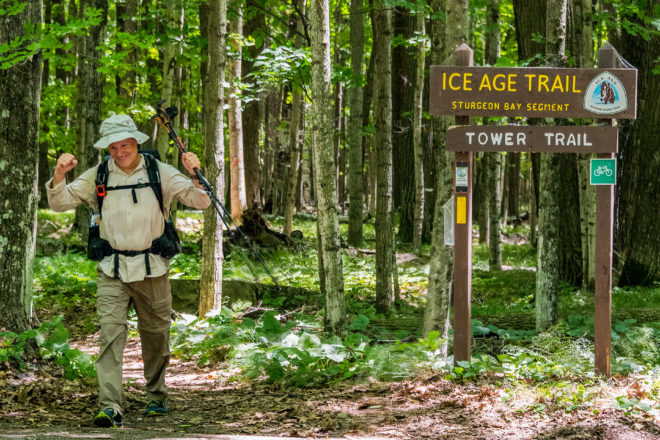 When Nick Chronis came around the final bend of the Ice Age Trail (IAT) at 2 pm on July 12, well-deserved cheers from members of Door County VFW Post 3088 greeted him. “Well-deserved” is an understatement in light of the fact that Chronis – a Salt Lake City, Utah, native and Army veteran with deployments to Panama, Iraq and Afghanistan under his belt – was finishing a grueling, 1,200-mile thru-hike that began May 27.

Beginning on the Minnesota border near St. Croix Falls, the IAT winds across Wisconsin, tracing the edge of a once-immense glacier. When the glacier retreated more than 12,000 years ago, it carved unusual geological features into the landscape. One of the most recognizable results of this glacial movement in Door County is the Niagara Escarpment, a formation that is a hallmark of the county’s dramatic landscapes. In addition to beautiful examples of the Niagara Escarpment, Door County is also home to the IAT’s eastern terminus.

In Potawatomi State Park, next to a lookout tower, a rather unassuming plaque signaled the end of an amazing accomplishment for Chronis. With a smile on his face and looking remarkably energetic, considering his exhaustion, Chronis said that now he’s most “looking forward to being back home and being a dad and a husband.” Well-deserved, indeed.

For Chronis, walking the IAT provided the space and time to “forget the bad and remember the good” of his wartime experiences. The vast amount of time spent in the Wisconsin wilderness allowed him to decompress from his deployments and process his memories.

Chronis explained that, as a soldier, “You learn to manage your thoughts and compartmentalize really well, but the bad part about that is that the cup will runneth over … Walking like this – the therapy aspect of this – causes you to really relax. Your whole mental way of thinking through things – everything – settles down. You can’t just turn off your service,” he said, and hiking with Warrior Expeditions provides the space and time to process.

In addition to experiencing nature, Chronis also encountered the goodness in humanity. When speaking about his goals for the hike, he said, “[To] walk off the war and restore your faith in humanity because you’ve seen so many bad things that you wish you could forget. But when you’re back, you see so many good things.” Many of these good things came in the form of support from local veterans and “trail angels” who provided company, meals and encouragement along the way.

As Door County veterans welcomed Chronis at the terminus, they chatted about his experiences on the trail (which included a hawk attack, humidity and lots of rain!), but they also spoke about their experiences as fellow veterans. Chronis explained that, in recent years, society has recognized more and more the importance of aiding veterans in reassimilating to civilian life.

“We’ve been fortunate in the sense that, even though there have been multiple deployments, a positive is that we’ve learned that soldiers need to decompress.”

Joe Knaapen, a Door County resident and Vietnam veteran, spoke about his experience coming home from war and described the hostility that some veterans faced when they returned. In Knaapen’s case, mentally “walking off the war” was a process that began years after Vietnam. “The trauma of Vietnam was immediate and so pervasive that the politics of it took over the war,” Knaapen said. “No matter what your politics are, the troops are just following orders. There are people who don’t realize how expensive the freedom of speech is … When diplomacy fails, you need warriors. The gospel that I follow is that ‘you are needed.’”

At the IAT’s eastern terminus in Potawatomi State Park on July 12, I was overwhelmed by the strength of veterans such as Chronis and Knaapen and by the healing power of nature. In the words of Henry David Thoreau, “We need the tonic of wildness.” In the words of Nick Chronis, “The trail will give you what you need – and sometimes more.”