There was a time in the not-too-distant past when bars served tap beer in a variety of glasses – 10- and 12-ounce mugs, schooners – also known as goblets, chalices and, only in Milwaukee, bumbas – 7- to 12-ounce pilsner glasses, and, my personal favorite, the 6-ounce barrel glass.

So how did the ugly 16-ounce pint become the most popular personal beer delivery system in America? 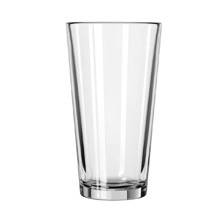 The British have their pints, but they are 20-ounce Imperial pints and come either in the attractive dimpled mug or the statuesque Nonic, which features a bulge about a third of the way down that makes it easier to hold onto in a crowded pub.

How did the utilitarian chunk of glass known as a U.S. pint become so popular? More importantly, where did it come from? Who started serving beer in these sawed-off bastard sons of the elegant British pint?

Turns out is was a Seattle restaurateur by the name of Mick McHugh.

“I didn’t think anybody would care or remember,” said the owner of FX McRory’s Steak Chop & Oyster House in downtown Seattle.

McHugh said it all began in 1975 when he and his then partner, Tim Firnstahl, opened a place called Jake O’Shaughnessy’s Saloon & Eatery next to the Seattle Center.

“We built on our back bar the largest collection of individual spirits in the world,” McHugh said. “It was rightly noted in the Guinness Book of World Records a few years later.”

They also prided themselves on a fine selection of draft beers, and Jake’s became the first place north of San Francisco to serve Guinness. McHugh wanted the appropriate vessels to serve the black nectar.

“I asked our Guinness salesman, what do they say in Ireland when they want a Guinness? He said, ‘Give me a jar’.”

The Guinness rep then explained that a jar is a pint.

“I loved the jargon, pardon my pun,” McHugh said. But he thought a 20-ounce pint would be a tough sell.

“It would be too pricey, especially when you’re trying to get people to try Guinness or Harp for the first time,” he said. “I thought 16 ounces would be a better marketing idea.”

He paged through glassware catalogs and could not find an appropriate jar. The closest thing was a 16-ounce Mason jar.

“Some restaurants were drinking out of Mason jars, but I didn’t think that was good enough for Guinness,” he said.

Then he saw what he recognized as a 16-ounce bartender’s mixing glass – also known as a shaker – in a catalog from Libbey, the Toledo, Ohio-based glassware company.

“That’s what we would use to stir our Manhattans and martinis in, then strain them out,” McHugh said.

He called his Libbey rep and ordered 10 cases of the 16-ounce shaker. The rep was shocked and wondered if McHugh’s staff was breaking that many mixing glasses because the company usually sold one to a bar every few years. McHugh shocked the rep again when he said he intended to serve beer in the mixing glass.

Turned out the factory didn’t even have 10 cases, but the rep managed to go to distributors around the country and delivered 10 cases to Jake’s for the Feb. 1, 1975, opening.” We did little table tents that said, ‘Order a jar of Guinness’,” McHugh said. “People were fascinated with the term.”

It wasn’t long before the 16-ounce mixing glass started showing up in other Seattle establishments.

“After about a year or so, we started seeing them in other bars, then in airports,” he said. “Then we saw Miller doing all their advertising with a jar, and Miller was the first to call them pounders (based on the British ditty, a pint equals a pound the world ’round). They went from being the slowest-selling Libbey glass to probably the biggest-selling glass Libbey makes. Everybody uses them now.”

The first microbrewer to both use and brand the shaker pint was Redhook Brewery in Seattle. Founder Paul Shipman had taken note of the Shaker pints at McHugh’s restaurant.

“Paul’s a good friend,” McHugh said. “We poured the first pint of Redhook in one of those when he went to market.”

“When Redhook rolled out on Aug. 12, 1982, there were no other micros in the market,” Shipman said. “When Mick decided to use the shaker, it became the staple glass in Seattle and then everywhere. I remember the glass company marveling at how sales of the glass skyrocketed.”