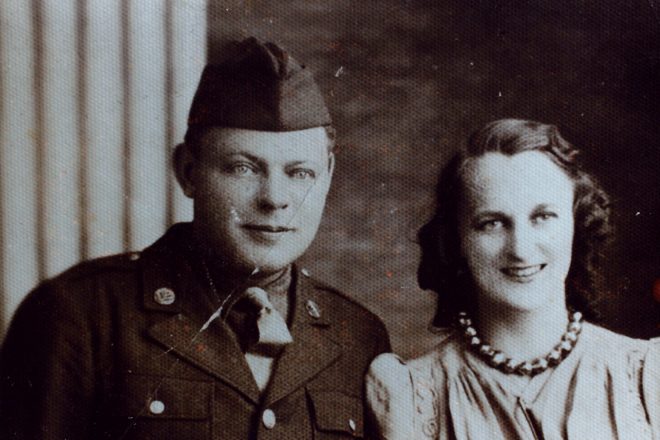 Lawrence and Helen Beckwith in 1942. Lawrence served four years in World War II, and died from his injuries in 1949. The couple had two children who would never know their father. Submitted.

I never met Lawrence Beckwith. I have little idea what kind of man he was – whether he was a great athlete or loved baseball, whether he was predisposed to heart disease or diabetes.

Mary Dannhausen, my mother, doesn’t have the answers to most of these questions either. Or her late younger brother. Or her older sister.

Lawrence Beckwith died at the Vaughan Veterans Hospital outside Chicago on March 18, 1949, from a combination of injuries and illnesses obtained serving in Rome, Tunisia and the Naples-Foggia campaign in World War II. He was 40 years old – my age today. During the war, he contracted malaria and was shot in the helmet.

When he was discharged Dec. 8, 1945, he wasn’t the same man Helen Shaughnessy had married three and a half years earlier, shortly after she became pregnant with my mom and five months before he entered the Army. He spent much of his last years at Vaughan, and my mother would never know him outside of a couple of short visits to a ward there filled with similarly injured veterans.

My mom said her own mother was never the same after the war either, and just a couple years later, she died of breast cancer, suffering terribly from radiation burns caused by the treatment of the time.

“Near the end, the doctors didn’t want us to see her,” my mother told me during a late-night conversation a few years ago, when I finally had the courage to ask her about it. “But she insisted on seeing us one last time. We were at the bottom of the stairs, and she walked from her room to the top of the stairwell. She was crying, and they pulled her away, and that was the last time I saw her.”

My mom was 12, and along with her older sister and younger brother, she had become an orphan. Her aunt Anne, a single working woman, took them in and raised them, but they would never have their parents to talk to, to thank, to celebrate Mother’s Day or Father’s Day. They would never hear their father say, “I’m proud of you.”

You won’t find Mary Dannhausen’s name in the long list of casualties of World War II. She didn’t lose a limb or succumb to disease.

She only lost a father.

She never saw her mother and father share a meal or a dance, or make up after an argument. Never had a father to lean on when navigating high school in the Back of the Yards on Chicago’s south side or college at Loyola University.

When she moved to Door County with my father in the early 1970s and raised six children of her own, she didn’t have a father to become a grandpa, to lend a hand or to tell the grandkids stories about their mother.

She never complained about this, of course.

“There were a lot of men in the war from around us,” she recalled. “Back then, most of us never left the neighborhood, so we didn’t see that there were people whose lives weren’t like ours. Nobody had much money. A lot of people lost their fathers. We were lucky my aunt had the second floor of the apartment she could rent.”

I heard this general story when I was a child, but I only recently realized my mom was an orphan and all that it meant – the way you realize certain things about life only when you try to navigate them in adulthood.

With my father, she raised six kids on a shoestring budget, both working two jobs. Lawrence Beckwith’s daughter learned what motherhood was without an emergency helpline to call or a fatherly hand extended to help.

Somehow she did it, overcoming health battles physical and mental. Only in my recent adulthood did it dawn on me how many of these problems might be traced to the trauma of her youth, to that final vision of her mother, to those too-rare glimpses of her dying father, to all the formative years without them.

I’m 40 now. I talk to my mom and dad almost every day. I try to check in on them, but I’m usually asking for help. Where should I plant these tomatoes? Why won’t the chainsaw start? What gets this grime off my shower door?

Forty years old, with endless questions to ask of my parents. All of them questions my mom never got to ask of her own.

World War II claimed the lives of an estimated 75 to 80 million people worldwide, including 407,300 American soldiers. Another 671,801 soldiers were injured. Millions more were left to deal with the aftermath, and many, like my mother, still deal with it today.

Last week it leaked that national security adviser John Bolton is refreshing half-baked ideas of invading Iran, with Congressman Tom Cotton parroting the same easy-in, easy-out lines that Donald Rumsfeld, George Bush and Dick Cheney used to sell the war in Iraq in 2003. Some justify the idea based on security aims, others on economics. The worst of them just seem to think it would be fun.

As you listen to the drums of war, consider the costs. Not just the cost of the defense budget, the tanks, the fighter jets or the battleships. Not just the soldiers whose lives will be lost or whose bodies will be maimed. But those left behind to deal with their losses and their injuries – the casualties felt in the decades after the bullets stop flying.

Consider my mom, her brother and sister: just three names among the millions of hidden casualties of war.