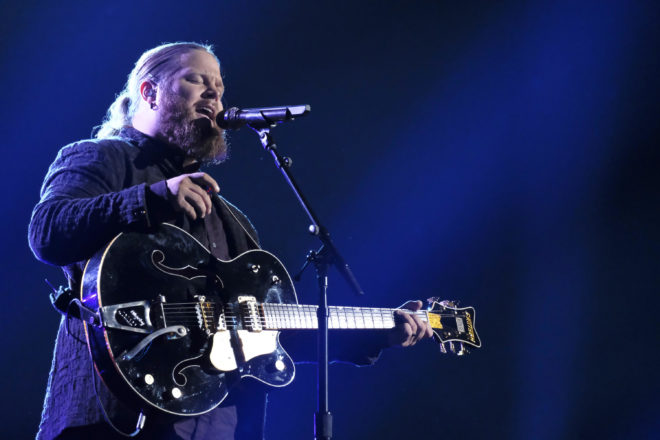 Chris Kroeze was a contestant on “The Voice,” and on Aug. 18, he’ll grace the Peg Egan PAC stage in Egg Harbor. Photo by Trae Patton/NBC.

Chris Kroeze, the runner-up during Season 15 of NBC’s The Voice, has been hooked on music since his father gave him his first guitar at age six. Today he’s an accomplished country artist who has shared the stage with musical greats such as Blake Shelton, the Doobie Brothers and Montgomery Gentry. On Aug. 18, 7 pm, Chris Kroeze and his band will take their high-energy and fun-filled set to Egg Harbor’s Peg Egan Performing Arts Center (PAC, eggharbordoorcounty.org/events/peg-egan-sunset-concert-series) for a free show.

Kroeze’s guitar and vocal skills are what caught the attention of The Voice’s judges, and they continue to impress audiences across the country. This year, Kroeze has also made eight trips overseas to play for U.S armed forces in the Middle East. In addition to providing quality music, he focuses on crafting an enthusiastic show and cultivating a relationship with each audience.

“Our whole show is all about a connection with the crowd, getting a good interaction back and forth, and making sure that we’re all in this together,” Kroeze said.

Crediting influences as diverse as Hank Williams, Patsy Cline, AC/DC and Guns N’ Roses, Kroeze has a style that’s upbeat, charming and classic. His best-known singles – “Four Letter Words,” “Human” and “Better on a Boat” – feature both his gravelly voice and his skill on the guitar.

Music is both a passion and a career for Kroeze. While growing up in Barron, Wisconsin, he remembers running around in the local woods with only bikes, fishing poles, his guitar and his dad’s old tapes to entertain himself. Partly because of limited access to other pursuits, Kroeze threw himself into music with all his energy, developing both a passion and a talent.

Years later, when the opportunity arose to participate in The Voice, he decided to go for it. That decision, made with his wife, Mara, catapulted him into the public eye. Although he didn’t ultimately win the competition, the experience challenged him and prompted artistic growth. For Kroeze, feeling uncomfortable is essential to continued success, and he advises young musicians to seek out new experiences whenever they can.

Currently on a tour that includes more than 200 shows, Kroeze finds that one of his challenges is balancing both the business and artistic aspects of being a career musician. He’s also working on being more vulnerable with audiences and writing more original songs.

But no matter what else is on his mind, Kroeze commits himself fully to providing a fun-filled experience for every audience. After his performance at the Peg Egan PAC on Aug. 18, Kroeze wants audience members to walk away saying, “Wow, that was really fun!”

As for the future? Kroeze may return to Nashville to record more music, and he would love to continue building his fan base and performing on tour. However, he acknowledges that plans for the future are constantly changing. The bottom line is always his passion for making music and sharing it with others.