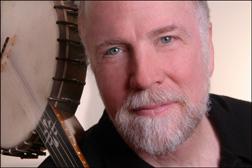 Grammy nominated artist John McCutcheon will be featured in concert Wednesday, Feb. 2 at the White Gull Inn in Fish Creek. Tickets for the 8 pm concert, the fourth in a series of seven, are $20.

A Wisconsin native, McCutcheon has emerged as one of the country’s most popular and respected folksingers. He is a master of a dozen different traditional instruments, most notably the rare hammer dulcimer. His 30 recordings have garnered numerous awards, including seven Grammy nominations.

McCutcheon’s apprenticeship to many of the legendary figures of Appalachian music imbedded a love of not only homemade music, but a sense of community and rootedness. He also created a storytelling style that has been compared to Will Rogers and Garrison Keillor.

McCutcheon has produced over 20 albums of other artists, from traditional fiddlers to contemporary singer-songwriters. His books, instructional materials and workshops have introduced budding musicians to traditional American music.

An optional pre-concert fixed price dinner will be served at 6 pm. The menu consists of Beef Burgundy with garlic, mashed potatoes, rolls, and mixed greens salad, and dessert.