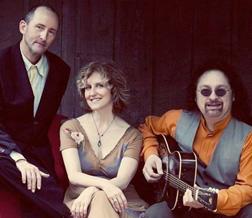 The Waymores, featuring three singer-songwriters, will appear in concert March 2 at the White Gull Inn in Fish Creek. Tickets for the 8 pm concert, the sixth in a series of seven, are $15.

Songwriters Don Henry, Sally Barris, and Tom Kimmel have each established single careers, but when they tour together as the Waymores, they pass the microphone, performing their own songs with accompaniment from each other.

Ray Charles, Patti Page, and others have recorded Henry’s songs. He has shared the stage with Joey Ramone, Pete Seeger, Shawn Colvin, and more. One of his popular songs includes the Grammy Award-winning “Where’ve You Been.”

Sally Barris has managed to be successful in the mainstream world of country music without giving up her folk and Celtic roots. She is currently on tour with her third CD entitled Restless Soul. Her songs have been covered by Trisha Yearwood, Keith Urban, and many others.

Kimmel worked a variety of jobs before establishing himself as an award-winning songwriter for Johnny Cash, Linda Ronstadt, Randy Travis and more. Featured in motion pictures such as Runaway Bride and Serendipity, recordings of Kimmel’s compositions have sold millions of copies around the world.

An optional pre-concert fixed price dinner will be served at 6 pm, consisting of chicken, shrimp, and andouille sausage jambalaya with basmati rice, cornbread, salad, and pecan pie for dessert.