Bring up ice fishing to just about anybody and the last image to come to mind would be guys in t-shirts tossing around footballs, clubbing golf balls, or the notion of any comparison to summer days going to the beach. But that’s exactly what one group of Sister Bay friends calls what to most is a foreboding, chilling expanse of ice and snow covering Green Bay in the winter months.

“The white sand beach,” says Sister Bay resident Brad Lindenberg. “All these people spend millions on their waterfront homes and pay thousands in property taxes, and in the winter we get it all for free.”

Ron Brown, the relative novice of the group, says ice fishing is not quite the frigid sport most people understand it to be. “It’s cold, but inside the shanty it’s 85 to 90 degrees,” he says. Once inside, all those layers you zipped on for the trek out start peeling off. And when the ice is solid and the temperature creeps toward 40 degrees the footballs and golf clubs come out. “You’d be amazed how far you can drive a golf ball on glare ice,” Brown says.

As dwindling fish populations have made catches fewer and farther between, such extracurricular activities have become more of the focus of the hobby. The fishing isn’t comparable to 10 years ago, Lindenberg says, let alone the ballyhooed days of yore when it was said a man could be kept busy for weeks on end catching all the fish he could pull through a hole. Even the most experienced fishermen often come home empty-handed after a day on the ice these days, one reason the activity has become about more than just the catch.

For guys who spend the summer months working doubles in area restaurants, the winter is their only real time to get on the water and spend time with good friends. Ice fishing is largely about the camaraderie, and increasingly, about lunch. 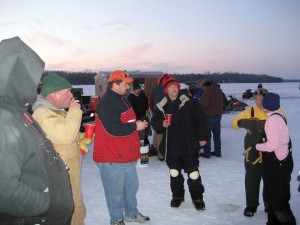 For this group, the eatin’ is good. Lindenberg has long been the head of the kitchen at the Sister Bay Bowl, Tony Gorham is a chef at the Waterfront, and others in the crew cook at the Inn at Kristofer’s, Pudgy Seagull, and the AC Tap. These guys aren’t going to cook high-class meals for visitors all year, then bring a few bologna sandwiches out to the shanty. Rather, Brown says it’s often more of a “chef’s showcase.” With apologies to the customers, the $30 you shelled out for a well-garnished plate in July probably didn’t get you the best the chef had to offer. That’s saved for the ice, for the customers whose opinions matter most.

“We’ll have shrimp, venison, scallops, tenderloin, kabobs,” Lindenberg says. “You’re almost trying to one-up each other with what you bring out there.”

And once each year there’s the penultimate feast – Fat Tuesday, when dozens of friends gather on a certain inland lake, each bringing their best, for a buffet to rival the most impressive and expensive of weddings.

But cooking and enjoying great food isn’t the only way they pass the time. Just as today, the shanties of the early 20th century tended to be arranged in small villages of men on the bay, where hours were spent in isolation. But the hardened men of the time weren’t immune to catching a buzz, socializing, or pulling pranks on one another. In his family memoir Pioneer Experiences in Door County, John R. Seaquist described some of his favorites.

One involved putting a piece of wood over the end of a cohort’s smoking stovepipe to flood his shanty with smoke, or sneaking into another man’s hut to put pepper on the stove. When he fired it up, “the sneezing which followed could be heard in the neighboring shanties to everybody’s enjoyment.”

Today, a license earns you the right to three “tip-ups,” a spring-loaded device placed across the fishing 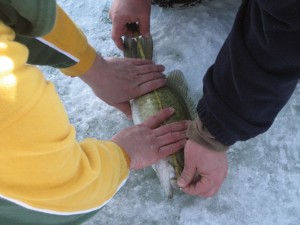 hole which raises a small, baseball-card sized orange or red flag a few inches above the ice when a fish has taken the bait. One fisherman can’t have more than three lines in at a time.

Most fishermen fish one line in the shanty and place two tip-ups in holes outside the shanty which they keep an eye on through the window. When a flag goes up, it’s a frantic race to the hole, which makes fooling your buddies that much more fun. A “Tip-up!” call can send a shanty reeling as guys scramble to see if it’s theirs. Or a guy will toss snowballs at another’s tip-up to raise the flag, then watch as their buddy flies out of the shanty thinking he’s got his prize on the line, only to realize he’s been had.

“You’re out there for eight hours and you may not catch a thing,” Gorham explains of the pranks. “You’ve gotta make up games and ways to pass the time.”

This can also be done by ribbing each other, subtly, or often in not-so-subtle fashion, especially for those trusted to help a buddy pull a large fish out of the hole with a gaff, or large hook. “Legends are made and lost at the hole,” Brown says before describing a few of the ways such legends are lost. “You can suffer indignities for years for failing to gaff a fish at the hole. A guy has done all this work to catch the fish and you screw it up by not gaffing it right.”

There’s an art to pulling in a fish on the ice, knowing when to give it some line, then when to pull it back in, playing the game with the prey just right. Pull too hard too soon and the fish might slip off the hook, or you might come up with nothing but a chunk of fish lips. Such an occurrence earns one shantytown catcalls throughout the day.

“You horsed it,” Brown explains. “Basically, anything you do to cause the fish not to be caught, you horsed it.” Brown lets out the call such a mistake garners you, an obnoxious, guttural horse neigh, and I can only imagine the irritation and embarrassment a day of hearing such ridicule would cause. “It could be anything – snap the line, pull too quick or hard, your line ices up – it might not even be your fault. Doesn’t matter, you horsed it, and you’ll hear about it.” 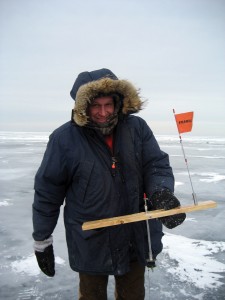 Inside some shanties is a historical record of the fishing tally. Short, simple summaries of the day’s efforts adorn the walls. “Feb 3. 2 flags, horsed 1.” Eight hours condensed nicely.

Brown, who showed up for his first day on the ice in a silk shirt, tie, and loafers, began his ice fishing career with, by his estimate, 45 slashes on the wall, his tally of days leaving the ice empty-handed. Finally, Lindenburg had to run to the Bowl to place an order, leaving Brown to watch his tip-ups. Sure enough, the flag went up and Brown pulled one in, his first fish through the ice, or so he thought.

“Doesn’t count,” Lindenberg informed him upon his return. “It’s not your tip-up. It’s gotta be all you.”

Your tip-up, your bait, your hole.

As for the fishing, around the peninsula they’re catching perch, walleye, northern, and trout in the winter. If you want quantity they say, hit the inland lakes. If a trophy is what you’re after, you head to the bay.

Once out, there are a few unwritten rules to observe. Don’t steal another man’s hole. Don’t park your shanty on his “property.” And don’t show up to the shanty with nothing to offer – beer, food, bait, just don’t come empty-handed. All are “bad juju” as Brown says. Finally, honor your fish.

“Don’t catch ‘em just to pull it out of the water,” Brown says. “Make a meal out of it, or give it to someone who will.” 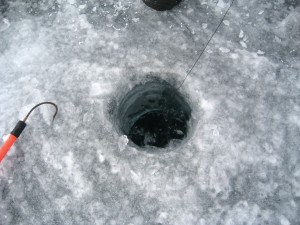 portant to do what’s right for the long-term fishing interests as well. Case in point, Chris Reichel had the fishing day of his dreams a few years back. He pulled up what Gorham says was a 25-inch walleye, then a 27-incher. (Typical of any fish tale there isn’t agreement on size. Brown insists they were larger.) But they were large females ready to spawn, and after taking photos with them, Reichel set them free. The guys were awed. Then he pulled up another walleye, over 30 inches, but another female. Another photo, and another release.

Finally, he pulled in a northern surpassing 40 inches, but once again, it was a female. Again, Reichel returned it to the water, left to spawn another fish for another day.

“That’s a true sportsman,” Brown says. Reichel may not have left with his trophy that day, but as these guys tell it, that’s only part of what it’s all about anyway.