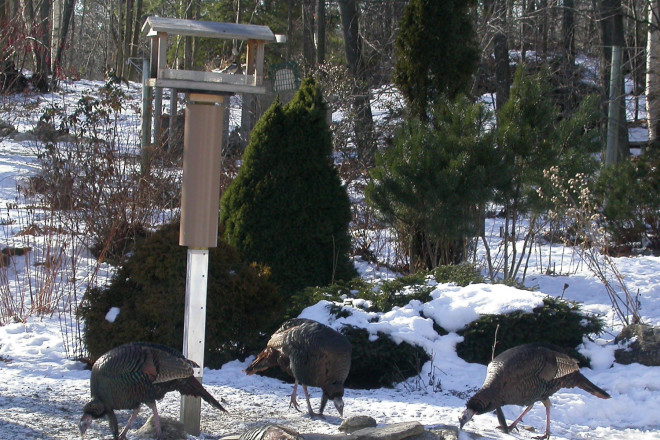 The historical range of the Wild Turkey in Wisconsin, as documented by Schorger in 1943, did not include Door County. These large birds were found mostly in the southern third of the state and their highest abundance was in the southwestern corner. By 1860 they were very uncommon and were completely extirpated by the late 1800s. Deforestation, fires, agriculture and especially excessive hunting brought about their demise. Due to the ease by which turkeys can be attracted to bait, unregulated market hunters killed and sold them by the thousands.

The state’s attempt to restock Wild Turkeys during the 1950s and 1960s ended in failure due to their choice of pen-reared birds. The Missouri Department of Conservation, through extensive research, 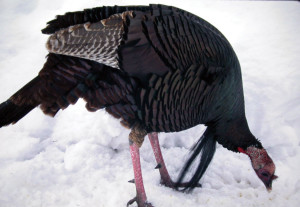 learned that truly wild birds were needed for successful reintroduction to new areas. Wisconsin traded 135 Ruffed Grouse to Missouri for 45 wild-trapped turkeys in 1974 marking the start of gradual restocking of these popular game birds. They fared very well and by the spring of 2000 the statewide population was estimated at around 200,000. The many turkeys you are seeing throughout most of Door County today are descendants of those released in the late 1980s at two different sites, one location in Northern Door and one in Southern Door.

The record snowfall in the county of 44 inches during December of 2008 naturally was very hard on the turkey population, making it extremely difficult for them to find food on the ground. Their best wintering success continues to be in the dairy farming areas. There the birds are attracted to waste corn on the ground beneath the snow as well as spread cow manure containing undigested seeds. Acorns, dried wild fruits and weed seeds are also eaten. Good years of acorns from the oaks and heavy crops of American Beech nuts help support most wintering turkeys. Unfortunately, the fall of 2008 found very low amounts of both beechnuts and acorns.

It has been determined that a healthy male gobbler, weighing upwards of 20 or more pounds, can consume a pound of acorns in one day. Hopefully 2009 will end up being a good acorn year which will allow me to find out how many Northern Red Oak acorns make up one pound. Dirt roads and also the graveled shoulders of roads are important for supplying the turkeys’ incredibly strong gizzards with much-needed grit. How strong is a turkey’s gizzard? One study proved that a turkey gizzard is capable of grinding up 24 English walnuts in the shell in 24 hours. Hickory nuts, requiring between 124 and 336 pounds of pressure to break, are broken to pieces in a turkey’s gizzard in 31 hours! Not only do they have strong gizzards but powerful legs and wings as well. They can easily outrun a man and, startled, these awesome birds can fly nearly straight upward and soon attain a going-away speed for a short distance of around 55 miles per hour.

Good turkey habitat requirements include dependable food, safe roosting sites, nesting cover, and suitable places to rear the young, the poults. Good roosting sites contain large trees with big enough horizontal limbs to support the turkeys’ weight and also are near or within conifer trees which provide the birds with some protection from the wind. It has been learned that these birds will remain at their roosts without coming down to feed during stormy weather for periods of as long as two weeks. They can lose upwards of 40 percent of their body weight during these crucial times.

Soon after hatching in spring, the young poults are finding their own food including insects, grubs, spiders, and other protein. They must eat about one-fifth of their body weight daily to remain in good health as they grow. The hens consume mostly waste oats, nuts, fruits and other available natural foods. One of the most commonly eaten foods by all age groups during summer and fall is grasshoppers.

Unfortunately, there are many hazards of nesting and poult-raising. The eggs are sought after by crows, raccoons, skunks, opossums, foxes and coyotes. The hens can suffer higher rates of predation especially by coyotes and foxes. The fragmentation, or “checkerboarding,” of the Door County landscape, contributes to the increase in population of several of the predators, particularly the raccoon, skunk and opossum. It has been shown that the so-called “edge” resulting from fences, small shrubs, vines and young trees created by human habitation naturally increases the food supply and suitable sites these strong predators require to rear and feed their young. Edges are excellent places in which numerous small organisms and wild fruits exist and multiply.

Male and female turkeys hatch in roughly equal proportions. However, over a period of years where these large game birds are not hunted, populations tend to build up higher numbers of males than females. The beards of the adult males are good identification features, the hanging tufts of hair-like feathers sometimes extending downward from their chests 10 to 12 inches. Their sharp inch-long spurs on the lower back of each leg are also good features to watch for. The young of the year, both male and female, will lack beards completely. The second-year males, the “Jakes” or sub-adults, will sport two to three-inch beards. Another interesting and easy way to sex the birds is by examining their droppings. Males have long, straight or J-shaped droppings while the hens have curled or bulbous droppings. 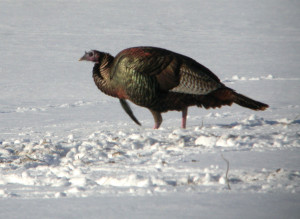 There have been numerous complaints from people feeding songbirds in winter, of turkeys being attracted to the handout and, in the process, becoming unwelcome and very messy nuisances. Some reports had the turkeys on the very tops of the feeders and, in some instances, doing damage to the feeders while at the same time keeping the smaller birds away. My only suggestion is to stop feeding for a while in hopes that the turkeys will go elsewhere.

Our state DNR (Department of Natural Resources) continues to do a very good job of surveying turkey populations and hunters in order to maintain a secure population and a high quality, safe hunt with a biologically-based harvest. From all indications, the Wild Turkeys are here to stay, are fascinating to observe, and make for excellent eating.