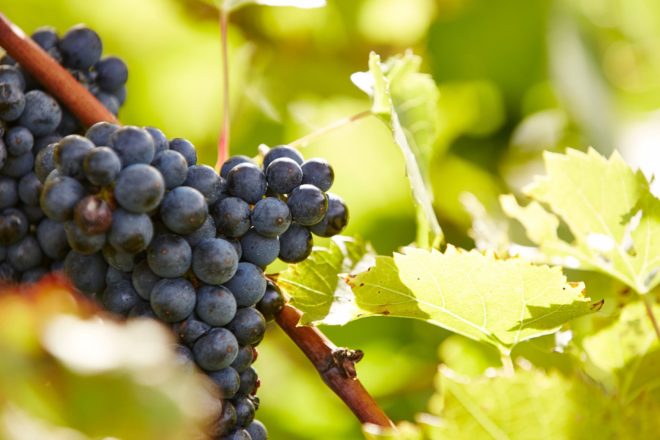 Grapes on the vine at Lautenbach Orchards. Submitted.

If I had told you 15 years ago that this corner of the world here in Door County would eventually be home to a wine region, you most likely would have laughed me out of the room. Why? Because this is supposed to be the land of cheese, beer and the Frozen Tundra — certainly not wine country.

But believe it or not, Door County finds itself at the epicenter of one of the newest appellations, or wine regions, of the world. In 2012, the federal government established this appellation — also referred to as an American Viticultural Area — as the Wisconsin Ledge in reference to the Niagara Escarpment, which runs the length of Door County.

Not only is this region new to the world of wine, but it is also demonstrating its promising future with grape varietals that are virtually brand new to wine lovers: Less than one half of one percent of this country has tasted or even heard of these grape varieties. And all of this is fermenting, one might say, when a new generation — millennials — will become the nation’s largest segment of wine drinkers by 2026. It’s the perfect confluence of a new wine region with new wine-grape varietals for a new wine generation.

Many of you may wonder how an area known for its cold winters (sometimes bitterly so) also has the capacity to produce distinctive, world-class wines that offer many of the nuances and stylistic aspects found in wines from places such as France and Italy. Because of Door County’s latitude at approximately 45 degrees north, we are situated in an ideal spot on the globe for grape growing. Although our winters are much more severe than those of our latitudinal counterparts in Europe, we share almost identical growing degree days, precipitation amounts and length of daylight with places such as Tuscany in Italy and Bordeaux in France from April through October.

The big difference is that France and Italy grow a species of grapes called vitis vinifera, which we know by such names as chardonnay, cabernet sauvignon and pinot noir. If we plant those varietals here in Door County, they freeze back down to ground level when the temperatures reach subzero temperatures.

It was the ingenuity of a Wisconsin dairy farmer named Elmer Swenson — who would be more than 100 years old if he were with us today — that overcame this winter challenge. Swenson realized that here in Wisconsin, we could capitalize on our perfect grape-growing conditions and solve the challenge of deadly cold damage to grapevines by hybridizing two different grape species.

He noticed that there were wild grapes — the vitis riparia species — that had thrived during our severe winters for thousands of years on the many riverbanks of Minnesota and Wisconsin. By crossing the pollen of the vitis vinifera with the pollen of wild grapes — after many years and tens of thousands of trials — he was able to develop wine varietals that are now planted and thriving in the Midwest, the northeastern U.S. and even the northwestern part of the country.

Today there are more than a dozen grape varietals being planted in this northern tier of states. Among the most common that you can now enjoy as wine are Marquette, Frontenac and La Crescent.

When you taste the wines of the Wisconsin Ledge, you’ll taste vintages that are immensely aromatic with medium body and bright acidity. They almost explode with flavor because of their distinctive varietal characteristics, which are enhanced by the relatively cool summer and fall temperatures that are moderated by the breezes off Lake Michigan and Green Bay. The glacial till soils that lie on the Wisconsin Ledge in Door County are perfect for the grapes to express their unique aspects with each vintage, offering what the French refer to as “terroir,” or a sense of place.

So although this new appellation is in its infancy compared to those of Tuscany and Bordeaux, there’s no doubt that the Wisconsin Ledge and its new varietals are expressing unexpected wine qualities that many wine lovers are thoroughly enjoying. Someday soon, instead of asking for a glass of Bordeaux from a restaurant’s wine list, you might be asking for a Marquette from the Wisconsin Ledge.