Fifty-nine years ago Professor Robert McCabe and several graduate students of his University of Wisconsin – Madison wildlife management classes introduced a group of us, on a one-to-one basis, to the thrill of Woodcock watching. Prof. McCabe had been influenced to this annual spring ritual by his mentor and predecessor, head of the wildlife management department, Aldo Leopold.

Since then I have missed very few springs of enjoying this evening performance. Now we witness the performance in our own five-acre field west of our home. What further cemented by being a tried and true devotee to this delightful activity was reading and re-reading the essay, “April Sky Dance,” in Aldo Leopold’s classic book, A Sand County Almanac. Having read this, followed by your own experiencing of the Woodcock show, you will more fully realize why I too yearn each spring to thrill to one of the most beautiful of all wild bird courtships.

Few things offer me greater pleasure than introducing people for the first time to some unusual event in nature that will so impress them that they will not want to miss it in future years. Such was the case during the spring of 1971 when some friends came all the way from Illinois to witness the Woodcock show.

The Woodcock’s long beak has a flexible tip to help it grab earthworms as it probes deeply into the soil.

At first I thought the vesper concert, performed nightly by these birds during most of April and May, was going to backfire because of the bright, nearly full moon which rose that evening around the time the performance was to begin.

The unanticipated additional foot-candles of light falling on the back meadow scene would, I thought, keep the little Woodcocks in the Aspen thickets close to their source of favorite food, earthworms.

Official sunset, sky perfectly clear, came at 8:06 pm. Generally the first singing begins, assuming the sky is clear, at 22 minutes after sunset. Our unselfish aim was to be on-hand early enough to conceal ourselves well so as not to miss the beautiful sight of this black-button-eyed troubadour as he spiraled upward in his musical display.

We waited, and waited, and no bird arrived. No song laced the evening sky. Finally I got to thinking that some natural calamity had claimed this little creature.

What a shame it would have been, coming all that distance from Chicago to find our performer out of commission. We wasted little time hurrying down the highway a few blocks and then off into a field overgrown along the edges by small evergreens and young Aspens, a site where surely another Woodcock would be concertizing. But no luck there either. He too was quiet.

Back to our original seats we scooted. Hallelujah! The concert had begun! Little by little we timed our approach to “center stage” as the bird flew high into the early evening sky. Soon we were so near to him when he landed that he wasn’t sure whether or not it was safe to “peent.” But he did. Barely. He would utter the sound, “whup” four or five times that we compared to our whipping a small stiff branch through the air.

Finally out came the comical high-pitched quack-like “peent” sounding for all the world as though it was being produced on a reed instrument of sorts. When I played his tape-recorded song (which I had made a few minutes earlier with my small field recorder) back to him, that was when the almost frenzied display began.

All around the small grove of Quaking Aspens the bird fluttered in short spurts frantically searching for the concealed intruder. I tried to be careful to not overdo my taped playbacks for fear it might drive him to a different “concert hall.” That would be a sad night indeed. 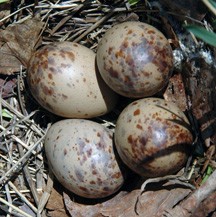 Woodcock eggs are colored to blend with the ground cover around the nest.

Fifteen minutes later, our show completed, we slowly worked our way back to the house. Now I fully agreed with my idol, John Muir, when he wrote, in effect, that going out was really coming in! It was our being outdoors when we were in our greatest glory! (It still is!)

What a pleasure it had been that early May evening, frogs singing down in the swales, full moon now riding low above the spruces to the south, and especially witnessing the total performance of the American Woodcock, from its comical peenting on the ground to its musical, spiraling, twittering flight high into the nighttime sky.

I began conducting an annual Woodcock survey each spring for the U.S. Fish and Wildlife Service about 58 years ago. Finally, when my hearing of high sounds began to deteriorate, Charlotte took over the listening and counting. Our route, chosen randomly and done identically every year, ran along Old Stage Road in northern Door County. Starting 22 minutes after sundown on a clear night we used to count for three minutes at 10 different sites spaced four-tenths of a mile apart.

In our last year of counting, we tabulated six Woodcocks along the route, about average for the course. These birds were very likely already paired and the female was somewhere nearby sitting on a clutch of eggs or looking after her young. Chances were good that they had wintered in Louisiana or western Mississippi, arriving there in late November into early December. They left for the North Country between late January and early February. The first sighting of a Woodcock in northern Door County several years ago was on March 15 by our good friend, Don Buchholz, former director of The Clearing at Ellison Bay.

What a thrill it is again to say “hello” to this little troubadour friend of the Alders and Aspens, the American Woodcock. If only he knew how hard we wish the day will never arrive when he and his offspring are displaced from their singing ground by “progress” of our times.

Nature is wonderful if only you will have her. And once you do, never let her go!