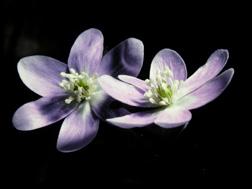 A close-up view of Hepatica blooms. Photo by Roy Lukes.

Now that April, with its “on again, off again” nice weather, will come to an end in a day, it’s time to look at magnificent, magical May in all its natural wonders. Freakish snowstorms are definitely not out of the realm of possibility, but on the other hand, our records tell us that splendid things will soon occur.

This is the month our Mother Earth “opens up” and the soil warms, sending its clean earthy fragrance to our nostrils. The genuine plant harbinger of Spring, poking its way through the muck in the White Cedar swamps, is the Skunk Cabbage. Whereas few people ever get to see these exotic plants, they do live in fairly close contact with the number two wildflower in early blooming and dependability, the Hepatica.

The great majority of old-timers I talk with refer to the Hepaticas as Mayflowers. By rights “April-flowers” would be a more appropriate nickname. Over the last 10 years, the average first appearance of the Hepaticas in our woods is around April 15. It’s not a woods full of them, but at least a few along the warm, wind-sheltered, sun-drenched edges of openings. Call them what you wish, their array of delicate pastel colors leads us to feel they are one of the most beautiful of all spring ephemerals.

Ephemerals (e-FEM-er-als), lasting for a short while, include the many wildflowers that bloom quickly before the dense canopy of the broadleaved trees blocks out the sunlight which is so important to the success of these small plants. The typical mixed hardwoods common in our county, consisting primarily of Sugar Maples, American Beeches and Eastern Hemlocks, are known to produce about 95 percent shade on the forest floor. This surely has a limiting effect on the plants that can survive there. In order for the wildflowers to set seed properly they must bloom before the dense canopy is formed. 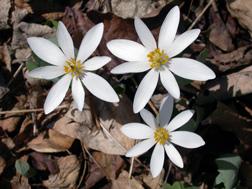 A trio of Bloodroot blossoms. Photo by Roy Lukes.

South-facing woodland slopes in the higher elevations of the county will usually produce many blossoming wildflowers by the end of the third week of April and into the middle of May. Included are the Trout Lily, Spring Beauty, Bloodroot (these come and go very fast), Wood Anemone, several species of early-blooming Violets, Large-flowering Trillium, Dutchman’s Breeches and Squirrel Corn. Dutchman’s Breeches most often beat the Squirrel Corn to flowering by about a week, but their periods of good bloom do overlap. The last of the “Breeches” welcome the first of the Squirrel Corn.

Chipmunks must respond to this fickle weather much as people do. They were out and about with vigor during the last week of March but are nowhere to be seen as I write this, April 18. The snow has chased them “indoors” too. Another factor keeping them at bay is the large number of at least a dozen Gray Squirrels searching for fallen food on the ground in our bird-feeding area lately. A number of people have reported the larger limbs and branches of Sugar Maples having their bark completely stripped off. The answer to that mystery can be traced to hundreds of starving Gray Squirrels in the county due to the absence of their natural foods. The inner cambium layer of the Sugar Maples is supplying them with some nourishment. Yes, if enough of the branches and limbs are stripped of their bark this may kill the trees.

Nature’s sounds in May are wonderful to behold. Few can rival the pair-bond call of the Sandhill Cranes. They arrived here by mid-March. There have been reports that they’ve begun their nest-building. The pair-bond call consists of a male and female calling (singing!) together in such a way that it sounds as though one bird is doing the vocalizing. This is truly a call of the wild that you should learn to recognize and get to enjoy as you greet the songbirds and wildflowers of May. This wonderful “duet” will continue well into May.

Few other birds’ songs usher in the feel of Spring for me as well as that of the Song Sparrow. Interestingly, according to the experts, not many Song Sparrows sing exactly alike. What pleasant gentle music they produce. A book you will thoroughly enjoy is The Watcher At The Nest by Margaret Morse Nice. Much of the book, written without scientific jargon, is a classic personal study of bird territory and mating. The first part of the book describes Mrs. Nice’s fascinating backyard observations of several pairs of Song Sparrows. Your appreciation of these well-known songbirds will be considerably enriched by reading this great wildlife classic.

Colorful, skittish, “scratching-in-the-duff” Fox Sparrows, among the largest of the sparrows, are passing through the county as I write this and hopefully will linger into early May as they sometimes do. About the time they appear on the scene we also expect to see our first highly elusive Winter Wrens. We have a few large brush piles near our house, and it is there we usually expect to see them. They really don’t winter here (rarely if ever) but are the first of the wrens to arrive in the county. Luckily these brilliant singers nest fairly widely in the county. Use birdsong records, tapes or CD’s to learn or to familiarize yourself with this tiny bird’s intricate and unbelievable song.

An excellent place to hear and hopefully see this bird is – where else but on Winter Wren Trail at The Ridges Sanctuary! Shortly following The Ridges Sanctuary’s purchase of the land on which this great trail exists, Harold Wilson, close friend and board member, and I hiked the trail, and the first bird we heard singing was the Winter Wren. Naturally that’s how the name of that trail came to be.

Assuming that May will arrive with good weather, I urge people to look upward more frequently, especially over the open fields adjacent to wetlands. The spectacular “loop-the-loop” courtship flights of the Northern Harriers will begin before the first of May and extend into the month. The great writer, Francis Hamerstrom, in her incredibly wonderful book, Harrier, Hawk of the Marshes, writes of two Harriers doing their sky-dancing and one “swings in giant loops like a stunting aviator.” The lazy swirling “kettles” of Broad-winged Hawks and other raptors will also begin riding the thermals this month, especially near the bluffs.

There are few months of the year whose unfolding of nature is more welcome than May’s. Winter has ended; we’ve paid our “dues” and are impatiently waiting for Mother Earth’s arms to “open up.” I’m as ready as I’ve ever been to being embraced by warm-weather nature and hope that you are too!