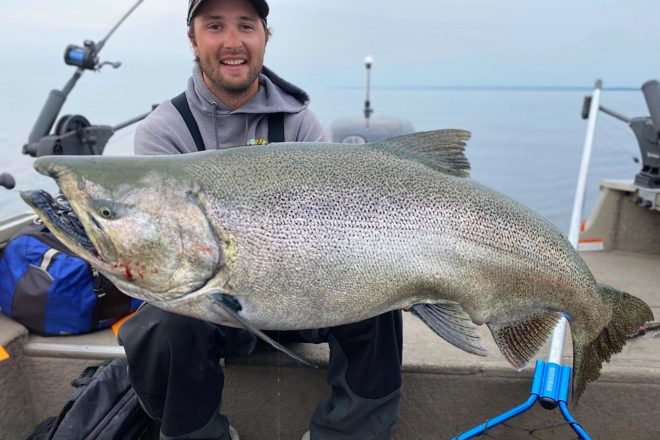 First-year charter captain Connor Bowen holds a 38.58-pound Chinook reeled in by a young angler aboard his 18-foot boat off Algoma on July 22, fewer than 18 hours before the start of the Kewaunee/Door County Salmon Tournament. Photo courtesy of A Reel Dream Guide Service.

38.58-pounder caught one day prior to salmon tournament opener

Just when you think things can’t get any wilder out on Lake Michigan, the Big Pond gives up three world-class trophies in just six days.

Four days later, Will Martin was on a guided trip with his dad and brother aboard an 18-footer out of Algoma when what would turn out to be a 38.58-pound monster of a king salmon inhaled a Moonshine spoon.

Martin’s catch, which came aboard the boat owned by first-year charter captain Connor Bowen, is thought to be the heaviest on the Wisconsin side of the lake since the Kewaunee/Door County Salmon Tournament winner hit 39 pounds in 1999.

Speaking of the tournament, Martin made his catch only about 18 hours before the event’s 39th annual start.

The official opening-weekend leader, Cory Boellaard of Nekoosa, had a 41-inch, 35.65-pound salmon crush a green Howie Fly just before noon Saturday after some storms had passed. He said it took the bait about 100 feet below the surface over about 150 feet of water near Baileys Harbor.

At the time of this writing early Tuesday, a 32.15-pounder reeled in by Bonnie Maggle of Sturgeon Bay was in second place. It smacked a green-and-black Stinger spoon set about 70 feet down over 130 feet of water off the Bank Reef on Monday night.

Clinging to third was Kevin Kopatz of Green Bay with a 29.98-pounder that inhaled a green fly behind a flasher set 60 feet down over 117 feet of water off Algoma on Saturday night.

The top 20 fish through the first four days were all 27 pounds or heavier, and the top 40 all weighed at least 25 pounds. If things continue at this pace, it’ll likely take a salmon of about 25 pounds just to crack the top 100.

Meanwhile, here’s an interesting tidbit on the Susann Jacques story: She gifted the fish of a lifetime to the charter captain.

“Hanging it in his den probably means more to him than it’d mean to me,” said Jacques, who shared time on the rod with her daughter and granddaughter during the hour-plus battle. “I have the memory, the pictures – and the sore arm.”

Keep up with the latest on the exciting finish to this year’s Kewaunee/Door County Salmon Tournament  at facebook.com/kdsalmon2021.