It is quite easy to find sanctuary in a place like The Linden Centre. As I am writing to you, my legs are stretched out across the wicker chairs on the rooftop terrace, and I am enjoying the last of the afternoon sun. When I look out onto the fields, cows are grazing, farmers are looking after their crops, and the sun is shining over the mountain tops. The contrast of the bright greens of the earth and the clear blue sky is something that I try to recreate in my sketchbook as often as possible.

A recent guest captured it so aptly, saying “When you look at this, you have to think that everything in the world is at peace.” 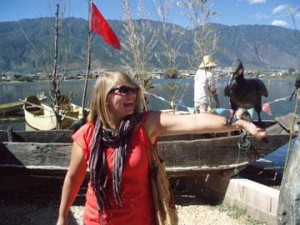 A cormorant took a break on Martha’s arm after the day of fishing.

It has been almost two months since I have left Door County to teach in China and my time here has been far from ordinary. As Brian Linden puts it, being able to experience the land, the people, and the life of Xizhou is an act of “cultural wandering,” where each step you take around the village is a totally unique experience.

Here are my prized snapshots of November:

• The traffic in China is something that I may never get use to, but I have learned that you need two things to survive a taxi ride from Xizhou to Dali: a strong stomach and a good sense of humor.

For some reason, I was the one who sat in the front seat, so I was the one who saw all of the action – or my life flashing before my eyes! A strong stomach was needed when the driver decided to tailgate behind a huge construction truck, creeping only mere inches away from its muddy license plate.

A good sense of humor needed to be used when the taxi driver decided once again to risk fate and pass this construction truck, that was passing a tuk-tuk, that in turn was passing a horse cart. I have learned to laugh at these traffic situations because all I can say in Chinese is “nice to meet you” and colors, so screaming at the taxi driver in my elementary Chinese would only lead to more confusion!

• When the Savory Spoon culinary-cultural tour was staying at the center, I was able to tag along on some of their adventures. On their itinerary for a Sunday outing was cormorant fishing. The last time I went fishing was when I was seven, and I did not use a cormorant to catch my puny sunfish; so this, I had to see with my very own eyes.

People in this region have been using cormorants to catch their fish for over hundreds of years. During our outing, three wooden tour boats followed a man in his metal boat out onto the lake to witness the practice. Perched on both sides of his boat were about 15 cormorants ready to start diving. The man started yelling to them in the Bai language, telling them to dive, and they started diving under water! He would hit the sides of the metal boat while they were underneath the water so that the birds could follow him around the lake. The man was like the Pied Piper; whenever he called to his birds, they followed him around the lake and even jumped back in the boat when it was time to take a rest. 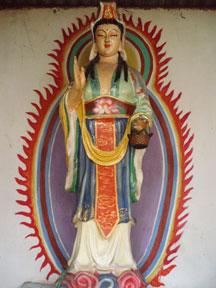 Guanyin, the goddess of compassion and mercy, was one of the statues at the Eight Mothers Temple.

Once a bird caught a fish, the man paddled as fast as he could over to the bird before it ate the entire fish. In the nick of time, he would scoop up the bird in a long net and bring him on the boat. Once the fish was out of his mouth, the bird had a snack and took a rest on the boat – until he was pushed back into the water to get back to work!

• The weekends have turned into prime opportunities to go hiking in the mountains and explore local temples. I have discovered that temples are not only used as a place to pray but also a meeting area for the locals.

To reach the Eight Mothers Temple, we took a 20-minute horse-cart ride and a short stroll down a rocky path. When we stepped through the doors, we were greeted by older women, who kindly smiled and invited us to join them for lunch. The smell of incense was strong and reminded me of burnt marshmallows on a summer night.

It was a very humbling experience to visit the temple, so we quietly looked around. Beautifully carved sculptures covered the walls from floor to ceiling. The grand statue was of the Eight Mothers and a depiction of the Buddhist heaven. Bright colors of every shade and hue were used to represent these gods. Guanyin, the goddess of compassion and mercy, took my breath away. A mural halo of colors surrounded her as she smiled peacefully down upon me.

The daily outings and unexpected weekend discoveries continue to amaze me as I live in China. I am taught a new part of the culture and a piece of history unfolds before me every time. In the upcoming months, I can only expect the breathtakingly unexpected, which I will continue to share with all of you in the near future.