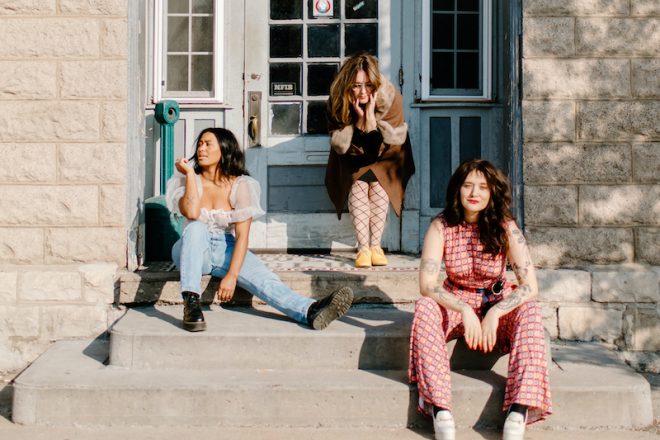 The three artists who make up The Yellow Room Collective and who are exhibiting at SŌMI Gallery’s pop-up gallery space are all enjoying a homecoming to Door County – and somewhat to their surprise. They returned in 2020, looking for a safe place to wait out the pandemic, and then they discovered that Door County’s lively art scene had changed quite a bit since they’d left.

“I had no intention of staying longer than a year, but if I had left, I wouldn’t have met Meg, and she is an accomplished and impressive artist,” said Claire Kat Erickson, who grew up in Baileys Harbor. “I had no idea how much of an art community there was in Sturgeon Bay – I am excited about making work here.”

Erickson was talking about Meg Lionel Murphy, the second painter in the show at SŌMI Gallery’s The Third Room, a space set aside for temporary shows at the new gallery on Sturgeon Bay’s 3rd Avenue. The Third Room is an exhibition space dedicated to showing the work of local artists who are not represented by galleries, but who have an exemplary body of professional work that is content driven, the gallery director said.

For her part, Murphy said she was drawn to Erickson’s work even before she’d met her.

“She is a great portrait artist,” Murphy said of Erickson, “but I love it when she brings in magical, surreal elements into her works.”

Both women paint pieces that grow out of difficult or painful personal experiences. For Erickson, it’s being a Black person in the United States. Last year she did a number of politically driven paintings that she described as racially heavy, such as a series on Black men and police violence.

Murphy paints out of her personal experience with domestic violence and the resulting PTSD. Like Erickson, she depicts women growing in strength.

“I had this vision of women growing as they experience trauma, growing larger until they could move through the space as giants,” Murphy said. “I painted about domestic violence, and I painted through it long before I had gallery representation. I think Claire and I are both hopeful in the way we make our work, imagining a future where things might be better.”

Initially, a friend in Minnesota encouraged Murphy to show the work. More recently, The Untitled Space in Manhattan’s Tribeca district showed her work, including a solo show this past summer.

“I have heard so many stories,” Murphy said. “In New York recently, a woman came in, and we cried together. Especially when the paintings are all hung together and they have a lot of writing, it is very immersive, and a lot of people who have experienced domestic trauma or pain seek it out.”

“I couldn’t afford my own art at this point, although the prints are still affordable,” said Murphy, who describes her upbringing as working class. Her parents came to Sturgeon Bay for work in the shipyards. Her father left for a job in Worcester, Massachusetts, when Peterson Builders went out of business. He then cashed in on the Massachusetts property boom to return to Sturgeon Bay and invest in some property, including Waterfront Mary’s.

Murphy is still a fan of the city’s shipbuilding industry. Women in one painting hold tugboats, and in another, a tug, a warship and a yacht float on the waters in front of the couch where two women recline.

Although her work has been collected by a few corporations and some well-known celebrities, Murphy’s favorite patrons are “the ones who have saved their money and bring the work home, and it is almost a protection piece – they get strength from it.”

Murphy came back to Sturgeon Bay from Portland when her grandmother passed away, and then she helped her mother clear out a rental apartment. When she learned the rent was far more affordable than her apartment in Portland, she moved.

“I thought I would stay just a little, but I like being by my family,” she said. “Then I met someone from Milwaukee, and he moved up here during the pandemic and bought the building across from The Yellow Room.” The first floor of that building will be a studio, and maybe eventually a gallery, for the three artists.

The third artist in the group is jewelry maker Jen Hough. During her time at the University of Wisconsin-Madison, she had a small apartment, so she worked small – which is easier for jewelry than for painting or sculpture. Her new studio – home to Jen Hough Designs – is still small, but that suits her work fine. She combines ethically sourced stones with recycled metals to create simple pieces that she sells online.

“Sometimes people want gold jewelry, but it is price prohibitive,” Hough said. “My business is just me, and I keep prices low so I can keep the pieces moving, and I can keep creating them.”

Hough prefers more delicate jewelry work, which is more in fashion now and a little closer to what she wears herself. Although her sales are almost entirely online, she does a few shows a year in places such as Chicago and Madison.

Hough returned to Door County for the same reasons that Erickson did; her husband is now a chef at the Whistling Swan; and they plan to stay.

“Knowing there are other artists in my age range doing interesting and important work made it feel more legitimate,” Hough said.

The show at SŌMI Gallery was her first physical show in Door County, and she sold three pieces before it even opened.

SŌMI Gallery is extending the Homecoming: A Yellow Room Collective in The Third Room to run through Jan. 3, 2022.