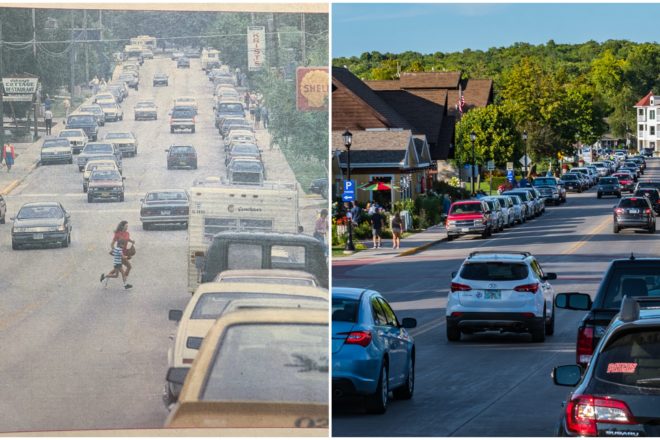 The downtown Sister Bay of August 1986 featured gas stations at the corners of Mill Road and Highway 42. The Door Deli at the far left is now Grasse’s Grill; the Standard station is now a public park; and Johnny’s Cottage is now Wild Tomato. On the east side of Bay Shore Drive, the Shell station is now CHOP restaurant, and the Krist’s property is now occupied by Stabbur. The village buried the power lines when it reconstructed the highway in 2015.

As the Dörr Hotel rises in Sister Bay and restaurants have expanded in Baileys Harbor, Egg Harbor and Sister Bay, people rightfully raise the question, is Door County getting overdeveloped?

But that question is not new.

Back in 1986, the Milwaukee Journal put that question front and center with a special, 18-page edition of its Sunday magazine titled, “Is It Time to Close the Door?: Growing Pains in the Peninsula” by Don Olesen, and it featured a picture of bustling downtown Sister Bay on the cover.

“Late one recent October, after the superb fall coloring had faded, it took me 15 minutes of stop-go driving to curse my way through Fish Creek from end to end,” Olesen wrote. Perhaps he was exaggerating, or perhaps it was actually busier back then.

At that time, the construction of the Sister Bay Yacht Club and the proposed Harbor Village RV campground were singled out as examples of a “too busy” Door County. That may sound quaint to residents and visitors today, but during the mid-1980s, Door County really was in the midst of a building boom that it hadn’t seen before and hasn’t seen since.

The mid- to late 1980s brought an onslaught of development, with dozens of resorts opening doors to welcome visitors – most notably the 278-unit Landmark Resort, which is still the county’s largest. But dozens of smaller resorts and large-scale condominium projects were also built in Ephraim, Egg Harbor, Fish Creek and Sister Bay, bringing hundreds of seasonal residences and lodging units online in just a few years.

There was also a fascination with shopping malls – resulting in the development of several Door County versions of the suburban staple – and the Country Walk Shops in Sister Bay, Main Street Shops in Egg Harbor and Top of the Hill Shops in Fish Creek all opened during the late 1980s and early 1990s. (On a smaller scale, the Masterfreeze plant in Sister Bay was renovated into the Walkway Shops on the ground where the Dörr Hotel is now under construction.)

By contrast, the “boom” of today that has created such a stir in Sister Bay includes the 12-unit Marina View complex, a similar condo on the top of the hill, the Goose & Twigs hotel, a smattering of vacation rentals and the 47-unit Dörr Hotel – roughly the size of Helm’s Four Seasons Resort, which was demolished to expand Waterfront Park in 2007.