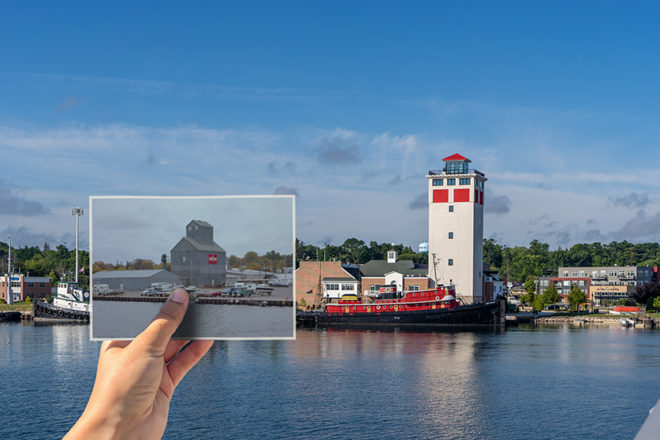 In October of 1974, Prof. William Tishler received a grant from the fledgling Wisconsin Sea Grant program to fund a photography project meant to document the changes that were occurring on the Lake Michigan shoreline. Tishler was serving on the faculty of the Landscape Architecture Department at the University of Wisconsin-Madison and enlisted two of his students in the project.

Nearly half a century later, those photos now serve an unintended purpose: as a time capsule that documented a county during the last years before a population and tourism boom transformed its landscape for better and for worse, depending on your viewpoint.

In the autumn issue of Door County Living magazine, we published several of these images from around the peninsula, but Tishler captured many more scenes. Here we publish more of them alongside images of those same locations today, taken by our photographer, Rachel Lukas.

Between 1970 and 1980, Door County’s population grew by 25%, from 20,106 to 25,029, mostly during the latter half of the decade. That boom increased demands for goods and services, and it enticed more visitors as those new residents opened new galleries, shops and restaurants.

“We were documenting how change was occurring in communities along the lakeshore and changing the aesthetics of what was there,” Tishler recalled. “That involved looking at the community quality of towns on the Lake Michigan shoreline, but mostly in Door County. We looked for interesting places, some which we thought might not be there too much longer.”

They were correct. In Sister Bay, for instance, the Berns Bros. Lumber Yard, which dominated one wing of the bay, had just moved to the edge of the village to what is now Lampert’s.

The images may evoke nostalgia for those small-town days, but they also dispel some of the myths of our memories. They show landscapes that are not as picturesque as our minds tell us they were, and acres that are still scarred by the clear-cutting of the turn of the century. And because the photos were mostly taken during the dreary, gray days of mid-October, they portray communities in the desolate way that most residents experienced them for the better part of eight months a year.

“It was a lot harder to move to Door County then,” said my own father, who moved to Egg Harbor the year before the photos were taken – in part to help his parents, and in part in response to the pull the county had had on him ever since my grandparents had brought him to visit as a kid.

Tishler’s images show an Egg Harbor with battered sidewalks, no curb and gutter, and open fields in the center of town.

It has been said many times that you could shoot a gun down a main street in any Door County community after Labor Day in those days and not risk hitting a soul. That was certainly true in many of the photos Tishler took that October.

But there are long-lost gems as well: the Hardy Gallery on Anderson Dock when even the roof was covered in graffiti, golden tree canopies over downtown Fish Creek, the old Baileys Harbor Yacht Club and phone booths in every downtown.

And as the northernmost town on the peninsula, there’s Ellison Bay – still largely the same.