Many wild white-flowering plants reach front and center stage during the last week of June in northeastern Wisconsin. The Canada Anemone, Canada Dogwood, Highbush Cranberry, Oxeye Daisy, Red Dogwood and the Thimbleberry are decked out in their immaculate white.

The species we will keep clearly in mind throughout July, patiently waiting for their delectable fruits to ripen, is the Thimbleberry, Rubus parviflorus (ROO-bus par-vi-FLOR-us). Some people call the Blackcap Raspberry, Rubus occidentalis, the Thimbleberry. Its leaflets are whitish and felt-like on the undersides. 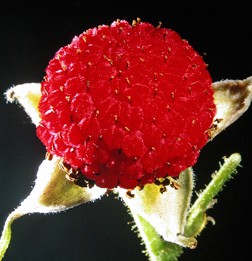 The delicious fruit of the Thimbleberry looks much like a raspberry.

Far more people know the genuine Thimbleberry to be the large, fleshy, Red Raspberry having tiny seeds and tart flesh, born on smooth canes having huge maple-like leaves. Few areas within its entire range are more famous for this favorite wild berry than Upper Michigan.

Many years ago Willard Scott, well-known TV weatherman, held up a jar of Thimbleberry jam sent to him by some U.P. people making the claim that, “Nowhere else in the entire world does this marvelous berry plant grow!” Little did they know that it ranges from the Bruce Peninsula in Ontario across the upper Great Lakes region, to southern Alaska, into the Black Hills of South Dakota and south to the mountains of Mexico, Arizona and California.

I feel, however, that this sought-after fruit is at its very best in lands bordering the upper Great Lakes. Their growing conditions in northeastern Wisconsin, always near the cool, humid shore areas (but away from the water’s edge) are similar to those encountered at a specific altitude on the wooded mountain slopes of the West. In fact I wouldn’t be at all surprised to find Mountain Maple trees growing there too, as are nearly always found in Thimbleberry habitat in Wisconsin. The two grow hand in hand.

Perhaps no plant genus, other than the Crataegus (cra-TEE-gus) (Thornapple) genus, is in such a chaotic condition as is Rubus when it comes to Latin names and identities. One of my idols and mentors of many years ago, Dr. Albert Fuller, chief botanist at the Milwaukee Public Museum and father of The Ridges Sanctuary, spent a number of years in retirement struggling with the correct classification of the blackberries of Wisconsin. What a tangle they were, both in thorny canes as well as nomenclature!

The outstanding Thimbleberry is one of the well-identified and studied species. One can easily admire several miles of continuous roadside “hedges” bordering Lake Michigan north of Sturgeon Bay during mid-July. Their large five-petaled blossoms continually remind us of single white roses set against fragrant, deep green leaves.

Their handsome, maple-like textured leaves are very slightly tacky to the touch and impart a clean, subtle perfume to the surrounding air. This would be my idea of the most absolutely perfect odor for a can of air freshener – clean, invigorating, but not overpowering or artificial. 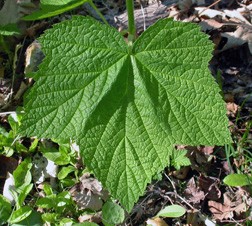 A single Thimbleberry leaf is quite large and similar in shape to a Sugar Maple leaf.

What a pleasure it is to carefully walk through a patch of thimbleberries as you pick the fruit. No thorns! One doesn’t have to wear a “suit of armor” as when picking blackberries where you really earn every berry you pick.

However, prepare yourself for some slow pail-filling when you go in quest of the thimbleberries. A good idea is to line your pail with several huge leaves before starting, to cushion the delicate fruit as they are dropped into the container. Walk slowly and carefully because the huge, dense foliage has a tendency to hide fallen branches and trippy logs.

The first time I picked these scrumptious morsels I thought it would take forever to even cover the bottom of the pail, let alone fill it. Oh yes, be sure to pick the berries clean because it is difficult to sort and pick them over before making them into jam.

Thimbleberries tend to flatten when picked. Consequently, when you’ve picked a pailful, you really have a lot of berries. Our recipe, as handed down by Miss Emma Toft, who became quite famous for her excellent jam, is as follows: “Combine into kettle equal quantities of sugar and berries, cook slowly, bring to a boil and immediately remove from the burner. Pour into sterilized jars and then seal.” Simple as that!

The red color is exquisite, the seeds are very small and easy to chew (unlike the huge woody seeds of blackberries) and the tart flavor is unsurpassable. Miss Emma had printed on her jam-jar labels: “Genuine Thimbleberry Jam, the jam with the pine woods flavor. Mud Bay, Door County, Wisconsin.”

For a dessert treat of a lifetime, cut a pound cake into half-inch slices, spread one side of a slice with thimbleberry jam, place on top of that a few thin chocolate bar squares, add freshly toasted marshmallows and finally put your sandwich together with another slice of cake. Mmmm, good!

Charlotte and I cherish an experience we had quite a few years ago during early August on Rock Island State Park. We hiked the trails for the better part of a day enjoying nature at its finest, continuously eating wild, organically pure raspberries and thimbleberries. Like Robinson Crusoe, we ate off the land that day and enjoyed to the hilt being north of the “tension zone!” 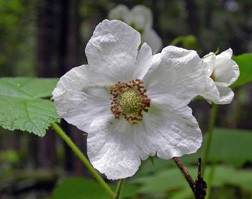 The large white Thimbleberry flower looks as if it was made from white tissue paper.

There is another equally famous berry of the huge Rubus group that I long to pick and eat in the wild someday, the Cloudberry, or Baked-apple Berry, Rubus Chamaemorus (cam-ee-MOR-us). We will have to travel to the northeast boreal regions to find these unusual fruits, to eastern Maine or Nova Scotia. There are also scattered locations of them in the alpine regions of New England.

This unusual berry grows on erect stems seldom a foot tall. The large single blossoms, like thimbleberries, are also white. When ripe the berries are yellow, soft, juicy, somewhat mucilaginous, and have a baked-apple flavor. It has been said that one must acquire a taste for them, but that eaten with cream and sugar, they are the great delight of northern travels.

Flowering of the wild berries, thimbleberries included, has been excellent here in many past years. Provided with ample July rainfall, northeastern Wisconsin can expect good crops of some of the best fruits in the wild. Prepare yourself for a bountiful harvest!