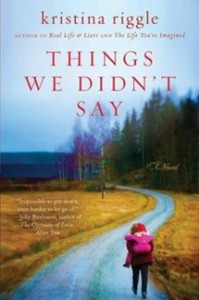 Stepmothers have traditionally gotten a bad rap in fiction, and sometimes, as in the story of Cinderella, deservedly so. But as Kristina Riggle reveals in her new novel Things We Didn’t Say, being a stepmother is not an easy role, especially with teenage stepchildren.

Michael Turner married too young and made a bad choice for a mate, realizations that came too late, after his babies were born. His wife Mallory’s mental health issues were compounded by substance abuse, creating a chaotic household. Eventually the marriage ended, with Michael as the primary custodian of his three children.

Enter Casey, the stepmother. She and Michael met and fell in love, she moved in with him, and found herself assuming the role of mother for teenagers Angel and Dylan, and their little sister Jewel. While the youngest embraces Casey, the older sister Angel proves anything but: driven by a teenage angst, she is rude and confrontational. Dylan, on the other hand, seems quietly receptive to his mother-substitute.

Until he runs away from home creating turmoil in the family that brings out the worst in everyone. Casey, though at heart a good person, has not been candid about her past with Michael. Mallory returns to the family circle because of the crisis and compounds problems. Michael is laid off by his newspaper; his physician father feels validated in his contempt for his son’s career in journalism.

While sometimes the story seems the stuff of soaps, readers will find other parts of the story that ring true. Anyone with a connection to a newspaper reporter knows the precariousness of that career; and anyone who has experienced divorces with children is familiar with the potential drama with exes and new relationships. As Mallory and Angel spin out of control, they seem extreme, until we remember people we have known; and Michael and Casey’s failures in communication seem overdone, until we think back to our own lives.

Riggle tells her story from the alternating first-person perspective of the principal characters. Although occasionally the technique tends to compromise the focus of the novel, at the same time, it increases the tension in the story. The Things We Didn’t Say is a compelling narrative, as the reader anticipates and dreads the revelations when those things are eventually said.

Below is from Casey’s point of view:

“Rummaging in Dylan’s room feels wrong, like I’m some kind of shady criminal ransacking his space.

“I poke my head under his bed. No old socks, and no laptop, either.

“This makes me think of Angel finding my journal in my desk – why was she even in my desk? – and reading it. While trying to focus on Dylan, all I can think is how far back she read, and what she’s going to tell Michael. I thought I’d be gone by now, the fallout happening in my absence.”

While the tale is slice of life, displaying the grittiness of relationships gone wrong, it also tells of the possibilities of redemption. The author sets the story in her hometown of Grand Rapids, Michigan, creating ordinary people in an ordinary setting who find themselves in extraordinary circumstances.

People do change, see the error of their ways, apologize and become better citizens. But in real life, transformations tend to be less tidy than in this piece of fiction. Nonetheless, the resolution is satisfying. Some readers might sniff, dismissing Things We Didn’t Say as chick lit. But for many of us living during these times of high unemployment, an economic recession, and what some have called a government-sanctioned suppression of the middle class, a little hope is good, even if it arrives in the form of fiction.

This reviewer, a former public school teacher, enjoyed an interchange between young Dylan and his father. The boy had been transferred to a charter school because his family feared violence in his former school, but he wanted to go back because of the music program and his friends. When his father reminded him that his grades at the new school were phenomenal, he scoffed: “That school is ridiculous. Everyone has awesome grades there. I hate that there’s no band. It’s not enough to play by myself. I want to be a part of something.”