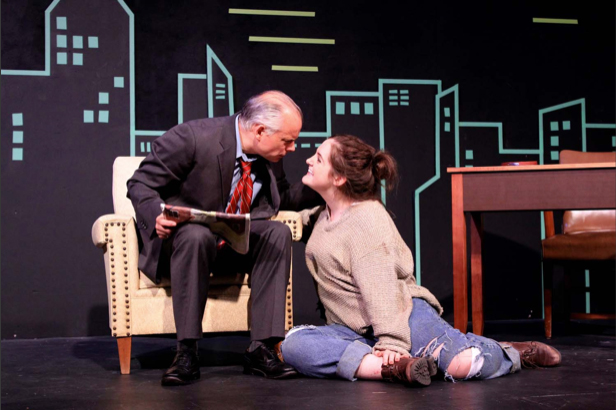 The drama of the relationship between a talking poodle-mutt and a pair of empty nesters will play out on the Third Avenue Playhouse (TAP) stage through the love story, Sylvia, from now to Sept. 12.

Ordinary humans Greg and Kate have just escaped from the banal Westchester County and moved into a new apartment in New York City when Greg finds Sylvia, an extraordinary dog, and brings her home.

Kate, who sacrificed a career earlier in life to care for her children, has begun to teach in a New York public school in Harlem, and dreams of bringing Shakespeare to “the streets.”

While her professional life is exciting and full of potential, her husband, Greg, is worn down and frustrated with his corporate job. He begins to take long afternoons off work to spend time with Sylvia. He lavishes Sylvia with praise and compliments, and insists that she accompany the couple on their anniversary vacation. Throughout the play, the tenor of Kate’s frustration rises from reluctance to revulsion.

The play is set in New York City, mostly inside the couple’s living room, which, through Sylvia’s eyes, is anything but mundane and provides a number of literal and figurative jumping off points throughout the play.

Sylvia does not play a passive role in the triangle. Like Kate and Greg, she walks on two legs and expresses herself through speech. Sylvia is a canine with as much humanity as her owners, and speaking in English allows her to convey her unconditional love for her family and her frustrations with the boundaries they impose.

Greg’s interactions with Leslie, the counselor, and Tom, a fellow dog lover, create wonderful comedy by contrasting Greg’s infatuation with Sylvia and his general indifference toward his wife.

When Tom’s dog, Bowser, mounts the un-spayed Sylvia in the park, Greg begins to imagine raising a multitude of Sylvias.

“But I’d be there for her. I’d pitch right in. I’d build a special box for her, with newspapers and a blanket and get right in there and give a hand. It would give us more in common,” he says.

The ridiculous banter between man, dog and woman is acted out by a cast of four, with Katherine Duffy as Sylvia, Alan Kopischke as Greg, and Jacque Troy as Kate. Ryan Patrick Shaw plays the roles of Tom, a Manhattan socialite and gender-fluid marriage counselor.

Sylvia runs at Third Avenue Playhouse now through Sept.12. A post-show talk back with the cast and director will follow the Sept. 6 matinee. A portion of all ticket sales will be donated to the Door County Humane Society. Performances begin at 7:30 pm Wednesday through Saturday and 2 pm on Sunday. A Tuesday evening performance will be held Sept. 8 at 7:30 pm. Tickets are $25 general admission and $10 students (10 – 24). For tickets, call 920.743.1760, visit ThirdAvenuePlayhouse.com, or stop by the new daytime box office location at 234 N. 3rd Ave, across the street from Third Avenue Playhouse. Box office hours are 12 – 5 pm. For more information visit thirdavenueplayhouse.com.