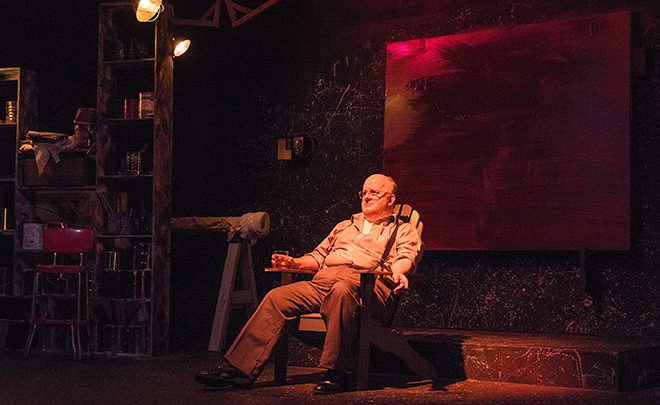 “What do you see?” Rothko asks his assistant Ken in the opening line of RED, gesturing toward the audience. “Lean in…let them fill your peripheral vision.” Ken stares into the audience, examining what his and Rothko’s eyes see to be a series of paintings. As Rothko speaks of his murals, an eerie sensation comes about you. Perhaps Rothko is not just talking to the imagined paintings but also through them to the audience, referencing us as he speaks of his labors. “You see how it is with them?”

Now showing at Third Avenue Playhouse (TAP) is John Logan’s Tony Award-winning portrait of the 20th century abstract expressionist painter, Mark Rothko. The two-person play, starring Drew Brhel as Rothko and Matt Frye as his fictional assistant Ken, takes place in Rothko’s studio as he undergoes work on his murals for the Four Seasons restaurant in the Seagram Building on Park Avenue.

Ken arrives in a suit on his first day, stiff yet eager. Rothko, with glass of scotch in hand, scorns Ken for his attire. “We work here,” Rothko said. “We start at 9 and end at 5. Like bankers.”

Rothko was no average painter. Well read in literature and mythology, he was deeply influenced by the writings of Friedrich Nietzsche and Carl Jung.

Rothko was born Marcus Rothkowitz in what is now Latvia, immigrating to the U.S. with his family in 1913 when he was 10. His career as one of New York City’s premier modern artists sent Rothko down a path of obsession with the human condition.

Rothko was notorious for being present every day at his gallery showings, watching people view his artwork, and sometimes scolding them or getting into arguments about the value of his work. 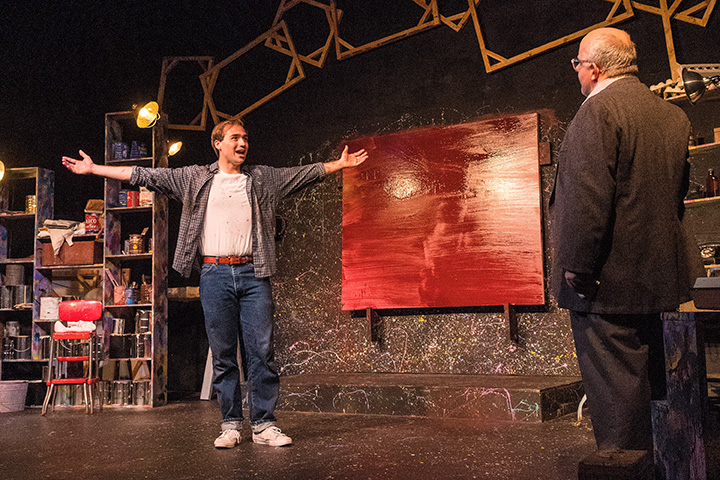 Rothko (David Brhel) and his assistant Ken (Matt Frye) debate about the artist’s life. Rothko was notoriously hard to get along with, and made many enemies in the New York City art scene. Photo by Len Villano.

This micro-management shines through Brhel’s performance of Rothko as the play develops. He treats his assistant as an employee and not as an apprentice, reminding Ken that his own artistic aspirations have no place in Rothko’s studio. Frye morphs the timid Ken into an outspoken theorist amidst the storm of Rothko’s moods. Rothko’s lectures about the value of art and the essence of human experience become conversations between an old master and an eager yet intuitively skilled apprentice in touch with the latest trends of Andy Warhol and other pop artists.

According to Boles, RED presents a rare opportunity for the actors to express their own passion for art and its effects.

“Anything that Rothko says in this play is applicable to what we do in the theater,” he said. “[As] an actor, given this part to do, you’re really just mirroring your own life…you get to articulate thoughts and feelings about how you approach your work.”

“There was a certain level of enthusiasm that went into the work that created this incredibly wonderful, creative atmosphere that fed what we’re doing,” Boles said.

Paint is used, of course; Rothko and Ken throw pigment and paintbrush at each other as well as the canvas. The set looks the part: strings of myriad colors fleck the background and floor, apple crates house the various instruments and ingredients needed to mix paints, and a record player plays Mozart. Everything is in order.

RED is, in short, a dive into a frustrated yet magnificently inspired mind. Supported by excellent performances and set and light design, TAP’s show is an immersive experience in the sentiments, both red and black, of how art and the artist howl and grow before they see the light of day.

RED is showing at TAP now through July 22. Production schedule is Wednesday through Saturday at 7:30pm; Sunday matinees at 2pm. There is also a special Tuesday evening performance on July 18 at 7:30 pm. Tickets are $28/adult, $12/student. For more information or to buy tickets visit thirdavenueplayhouse.com/red. To purchase tickets from the daytime box office, call 920.743.1760.