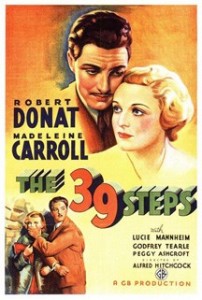 The original movie poster of Alfred Hitchcock’s 1935 film version of ‘The 39 Steps.’

James Valcq rolls down the sidewalk of Third Avenue on his Huffy bike. After he unlocks the glass doors of Third Avenue Playhouse, he uncaps a bottle of water and hydrates, preparing to direct another active rehearsal of Stage Door Theatre’s upcoming production of The 39 Steps, based on the Alfred Hitchcock film that was released in 1935.

“There’s lots of physical comedy – everybody’s losing weight,” laughs Valcq. “We have four very fit actors who are getting fitter by day. I get exhausted just watching them.”

The four actors include Ryan Schabach, Kay Allmand, Ryan Patrick Shaw, and Amy Ensign, who together are putting on what has been called ‘Alfred Hitchcock meets Monty Python.’

Schabach plays “the dashing hero with a very attractive pencil mustache,” says Valcq, while Allmand plays the three women he becomes romantically entangled with. Patrick Shaw and Ensign play about 150 characters between them. (No, that’s not a typo.)

The story is “classic Hitchcock,” says Valcq, “about the wrong man getting accused for something and getting involved in something he had nothing to do with.”

On a blank, black stage with nothing but a couple steamer trunks, ladders, and a sawhorse, the actors chase each other throughout the U.K.

“Hitchcock liked to do what he called ‘pure cinema,’” explains Valcq. “He started in the silent era, so if you turn the sound off, the images and the way in which they’re filmed really tell the whole story. He planned out shot by shot the entire film, sometimes before the script was even written. It was all about the visuals.

“And this show, I would say that the conceit is that it is ‘pure theatre’ – you have these four actors and they create about 32 completely different scenes out of nothing.” 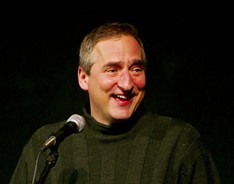 Though Hitchcock’s work is not usually described as ‘zany,’ The 39 Steps is “a wild ride,” according to Valcq. “About 90 percent of the script is actually the movie, but when the setting has been created out of a ladder and steamer trunk you can say the same lines and it just becomes funny. There is a scene where the hero and heroine are handcuffed together on the run from the police in the moors of Scotland. In the movie they get stuck in brambles and barbed-wire fences, in the stage version they get stuck in a sawhorse. And just watching the two of them try to maneuver themselves out of the sawhorse is funny.”

The actors take on a slew of accents – from mid-Atlantic to British to Scottish to German – and switch characters “on a dime,” according to Valcq. “They are having so much fun finding different vocal tones and different walks for different characters. Sometimes the shift in character is accomplished by nothing more than putting on a different hat.”

To prepare actors for their roles, Valcq assigned them certain scenes to watch from various Hitchcock films. “Two other movies – Saboteur and North by Northwest – are virtually remakes of this film, so certain scenes and situations and characters I think he perfected and got clearer in later films.”

The cast also looked at I Love Lucy episodes for inspiration. “This is a witty script,” says Valcq, “but I would say the bulk of the humor isn’t inherently verbal, it’s physical.”

Essentially, Valcq calls the play “a celebration of Hitchcock,” whom he admires greatly. “I think I’ve seen all but two of his movies. I’ve seen them all many times. And some people think Hitchcock is scary – he really didn’t get scary until Psycho (which came out in 1960). Earlier films were more romantic comedies or dramas that were exciting and gripping with a chill here and there, but they weren’t scary.”

Though he says audience members “don’t have to be Hitchcock aficionados or even have to know who Alfred Hitchcock is,” those who are familiar with the famous filmmaker will pick up various references. “There are references to at least a dozen other Hitchcock films – some obvious, some really subtle and I’ll probably find more as we go along.”

For those who have an aversion to British humor, Valcq is quick to say that the show not only did well on the London stages, but in the U.S. and throughout the world as well. “I think the humor is universal,” he says. “It’s so funny and it’s hard to describe why – but how do you describe how Monty Python is funny? It just is.”

Stage Door Theatre will present The 39 Steps from Sept. 18 – Oct. 20 at Third Avenue Playhouse, located at 239 N. Third Avenue in Sturgeon Bay from Wednesday – Saturday at 7:30 pm and Saturday – Sunday at 2 pm. For more information or to purchase tickets, stop by the box office, visit ThirdAvenuePlayhouse.com or call 920.743.1760.