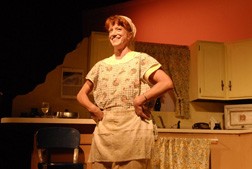 When James Valcq and I arrived on the scene as the new co-directors of Third Avenue Playhouse (TAP) in October of 2011, we set several goals for the future and for the most part these have either been accomplished or are currently being implemented. Of all these goals, the most important was the opening of our new 84-seat studio theatre and the creation of a year-round resident professional theatre company christened the Stage Door Theatre Company.

The name of the company dates back to TAP’s early days. Going through the archives there were several productions listed under the Stage Door banner, so when it became time to name our company we could think of no better name than the one originally coined by TAP’s first directors Amy MacKenzie and James Kaplan.

The first production of the newly formed Stage Door Theatre Company occurred in May of 2012. It was a staged reading of The Normal Heart featuring a cast led by American Folklore Theatre favorite Doug Mancheski. It was an exciting event and a terrific launch for the new company. We were off and running.

That first production was held in our 250-seat main stage which today is reserved for concerts and other events that require a larger space. It was held there while the studio theatre was still under construction. We finally opened the new theatre in late June of 2012 with a production of the Pulitzer Prize winning play, The Subject Was Roses. Since that time 11 plays have been produced in the new theatre by the Stage Door Theatre Company. By the time the current summer/fall season ends in October that number will be up to a lucky 13.

The Stage Door acting company has grown to include both local and out of town actors. Door County is home to many artists of all stripes. We are so lucky to have such a large number of highly trained professionals in our midst, and to be able bring in equally talented actors from all over the country. 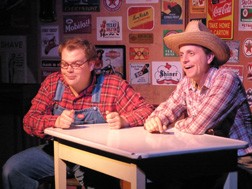 Case in point is our current production of Greater Tuna. The cast of two includes Dan Klarer and Ryan Schabach. They do not live in Door County even though they are both Wisconsin natives. Dan and Ryan make their living in theatres from New York to California. Door County is a familiar stop for each of them.

Dan has worked at the American Folklore Theatre for the last several years – most recently in the hit musical Victory Farm (he will be reprising his role in that show this fall at the Door Community Auditorium in Fish Creek). Dan is also the costume designer for our current play summer season. His costume designs for Greater Tuna are astounding.

Ryan is now based in Milwaukee but his work takes him frequently away from home. Prior to coming to Door County this summer he was appearing in the play Red in Santa Rosa, California. He spent several seasons in the last few years performing at Door Shakespeare. This summer he is appearing in three different plays for Stage Door as well as directing a fourth.

We have a total of 14 actors in our company this summer – all but four of them reside here in Door County.

Most exciting is that the acting company includes two local high school students: Michaela Kraft from Southern Door and Isaiah Spetz from Sevastopol. Both are participants in our StageKids theatre program for young people.

Completing our company this summer are two college interns: Ashley Wisneski and Madeline Harkema. They have been invaluable in helping us out this summer. In Greater Tuna, they are the unseen heroes of the show, helping out with over 40 quick costume changes made by the two actors in the play. The play literally could not happen without them.

The experience of coming to see a play at the TAP performed by the Stage Door Theatre Company in our intimate studio theatre is like no other in the county. The intimacy of the space allows the audience to feel themselves a part of the play instead of being apart from it.

Door County has its share of unique performance spaces from the beautiful outdoor settings of the American Folklore Theatre and Door Shakespeare to the incredible Peninsula Players to Birch Creek, Woodwalk Gallery, Trueblood PAC, Fishstock and the Door Community Auditorium. Add the TAP and the Stage Door Theatre Company to that list. Each of these companies provides a singularly unique experience for its audiences.

Consider that on any given evening between June and October, there are somewhere between 2,000 – 3,000 people attending a live performance somewhere in Door County. Thousands of people each week enjoy the unique pleasures of live performances by the many actors, singers and musicians who perform on a daily basis. We at the TAP and the Stage Door Theatre Company are very pleased and proud to be a part of this incredible group of artists and companies.

So come on down to Sturgeon Bay and experience what we call intimate theatre in an intimate setting. And if you like what you see (and I’m betting you will), please help spread the word to others. We love seeing new people walk through our doors and we equally love to see those same people, as we often do, coming back for more.

TAP is located at 239 N Third Avenue in Sturgeon Bay. For more information call 920.743.1760, visit thirdavenueplayhouse.com, or stop by the box office.

Tuesday through Sunday at 7:30 pm; Sunday matinees at 2 pm

The House of Blue Leaves

Wednesday through Sunday at 7:30 pm; Sunday matinees at 2 pm

After Labor Day:  Wednesday through Saturday at 7:30 pm; Saturday and Sunday matinees at 2 pm

Wednesday through Saturday at 7:30 pm; Saturday and Sunday matinees at 2 pm