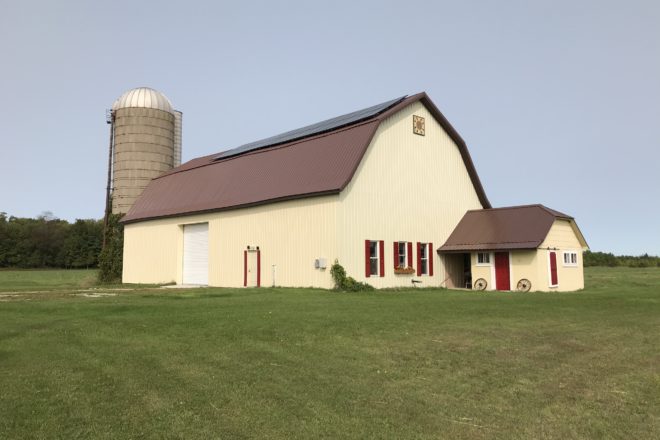 The larger of the two barns now has solar panels on its roof that provide electricity for the whole property. Submitted.

Four years ago, David and Barb (Fischer) Heilman received a wonderful gift in the form of a small family farm that had been in Barb’s family since 1873.

“Surviving all the wars and struggles of farmers since the Civil War,” she said, “this property has remained intact. With this gift came 150 years of accumulation of ‘treasures’ – dilapidated buildings, overgrown trees, mounds of dirt, rocks, tree trunks and other ‘treasures.’ Luckily, the rented farm lands have been cared for wonderfully by a farming neighbor. The farm buildings and land, where they are located, have not fared as well, nor are there any remaining functioning tractors or other equipment to help with the clean-up process.”

“Mostly we are doing this for the next generation, who have the skills and dedication to run a sustainable organic farm, but need the buildings and our time and skills to restore them,” Heilman said.

The plan is to eventually hand off the farm to the next generation – their daughter Yvonne – and return the farm to life. Barb’s predecessors were dairy farmers and grew crops, but she and her husband pursued different careers. Fortunately, they acquired some construction acumen and were able to manage most of the updates on their own.

“Besides the initial replacement of rotting massive timbers, replacing the roofs, installing the solar system and other tasks requiring professionals, my husband and I have done most of the work ourselves,” Heilman said.

The solar-panel system – installed on the roof of the larger barn – was naturally a new addition to the farm and an easy choice to make.

Heilman said, “Our electric bill was pretty hefty: $225-plus a month.
During the house renovation, we decided to put in electric baseboards – it’s an old log home.” Knowing that their electric bill would only get higher as a result, they researched the option of using solar.

“We like to be conscious of our use – that’s just how we fly,” Heilman said, “and the solar, after researching it, was a real no-brainer.”

Now, during most months of the year, they see a bill with a credit of $10, and during the higher-usage months, the bill is, at most, around $15 per month. After the government rebates on the cost of the solar panels, Heilman reported that they expect to have the investment paid back in about 10 years.

As for the new color of the barns – a color called “prairie wheat” – Heilman said it’s a tribute to her mother, Hazel Fischer, who was originally from Kansas and had chosen the color for the farmhouse.

Do you have or know of a barn to submit for consideration? Email Aleah at [email protected]m using the subject line “Barn.”