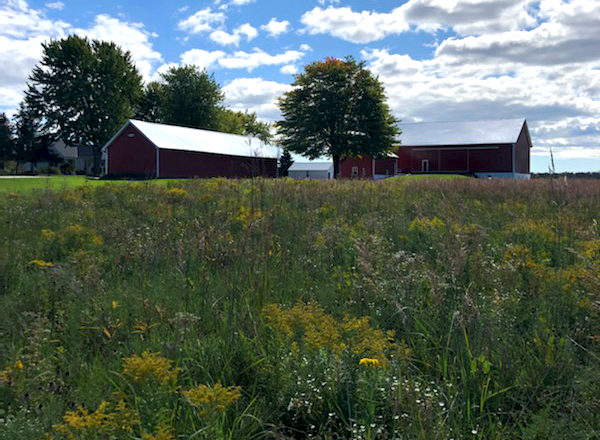 Mark and Teri Feuerstein have revived an old family farm in Sturgeon Bay, including a 1906 German-style bank barn. Photo by Aleah Kidd.

Mark and Teri Feuerstein have revived an old family farm in Sturgeon Bay, including a 1906 German-style bank barn. Mark, who was previously a UW-Extension agricultural agent, first became intrigued by barn revivals in 2000 after he helped to host a barn-restoration clinic and became connected to more than 100 restoration enthusiasts from around the Midwest.

“It’s only going to get more expensive,” Feuerstein said, “and the craftsmen who are capable of restoration are only getting harder to find.”

The experience of witnessing the increasingly rare skill of barn restoration eventually inspired the Feuersteins to begin work on the barns and farmhouse that had been in Teri’s family for generations.

“The farm stayed on the women’s side,” Mark said, “which is pretty rare. It’s been passed through the daughters’ side all the way through.”

The previous owners were Teri’s parents, George and Susan Whitford, who owned the property after Melvin and Irene Hoffman, Teri’s grandparents and Susan’s parents.

The barn, sitting on 206 acres of farmland at the end of a dead-end road, was last an active dairy barn in 1996. Mark and Teri purchased the farm in 2004 and began the long process of updating. With the help and guidance of Mike Torp – who was familiar with the property because he’d poured concrete in the barn three decades earlier – and Teri’s brother Tim Whitford, they set about replacing roofs, windows and doors, and remodeling the interior. In 2016, they sided the big barn and replaced the roof. Today the buildings are relatively maintenance free as a result – outside of painting the stone portion of the barn, which needs to be redone every five or six years.

The Feuersteins have also taken 38 acres of farmland surrounding the buildings out of crop rotation to grow wildflowers within the U.S. Department of Agriculture’s Conservation Reserve Program.

The goal of the wildflowers is to provide pollinators with more protected native habitat, and, of course, it makes for a beautiful summertime sight as well.