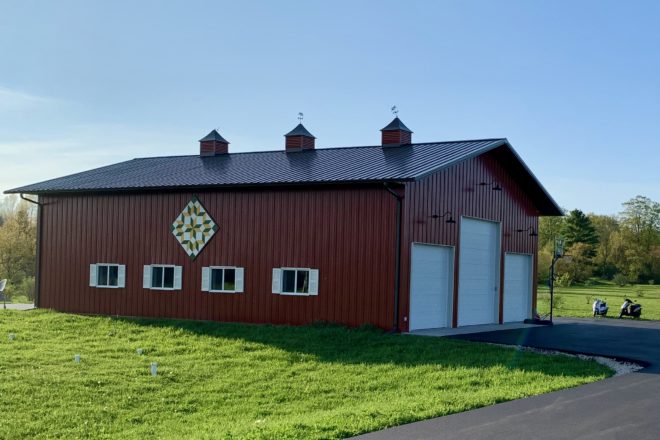 Erin and Kevin Wehrenberg have a barn to highlight that’s actually not so old, but it’s a beauty. They began the building process in 2017 and finished it in time to host Kevin’s 50th-birthday bash during the summer of 2019.

“Luckily, that was last summer,” Kevin said. “We had Mojo Rosa’s cater; Charlie Berens did a roast; and the UW Marching Band performed. Now it’s mostly storage, and we’ve had a socially distanced Packer watch party.”

The barn was designed and built in partnership with PBS Builders, a local design-build company.

“We worked with them and the design team to come up with what was my ultimate dream barn,” Kevin said, “and we wanted to make it aesthetically pleasing.”

The red barn has three cupolas, white-shuttered windows and a barn quilt, but the most unusual thing about it is what it shares the property with: a large rhinoceros statue and two Easter Island statue replicas.

As the producer of Netflix’s recently popular game show The Floor Is Lava, Kevin has added these unusual, large set pieces to accent the barn. The three statues appeared on the show as items contestants had to climb on, and now they’re living out their lives on the Wehrenbergs’ property.