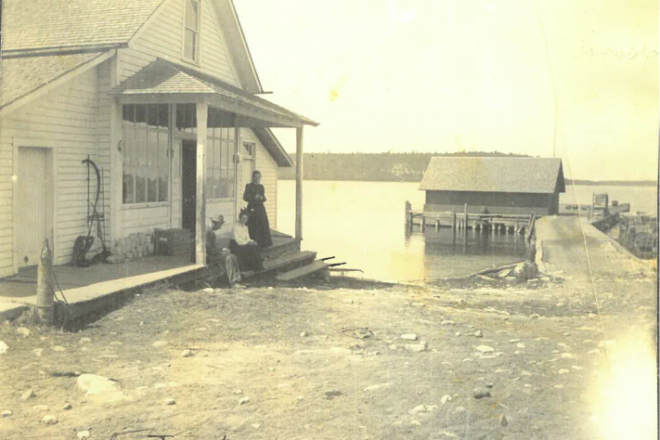 Of all the little grocery stores on which northern Door County families have depended, Anderson’s in Ephraim is distinctive: Not only did the Anderson family operate it for a century, but then the Ephraim Historical Foundation restored it as a museum. Since the 1960s, it has served as a memorial to honor all the other little stores that are long gone.

Aslag Anderson and his brother, Halvor, emigrated from Norway in the late 1850s to work in the lumber industry in Michigan’s Upper Peninsula. They came to Ephraim in 1858 to build a deep-water dock for the village, and, in return for their work, they were allowed to purchase 166 acres from the Rev. A.M. Iverson’s Moravian congregation for $1.25 an acre. Halvor started a farm and married Nettie Hanson. Aslag married Nettie’s sister, Greta, and built a general store that his children and their descendants operated for 100 years.

We know quite a bit about Anderson’s because of Charles Frederick Wiley. When he died in 1982 at the age of 72, he left a manuscript about his memories of a lifetime of Ephraim summers. A year after his death, his widow approached the Ephraim Historical Foundation about preparing his writing for publication, and seven years later, Did the Eagle Get You, Dr. Moss? was published.

This memoir includes a wealth of information about Anderson’s store and some of the lesser-known groceries during the early days of the village.

Wiley described Anderson’s as containing “all sorts of things: a limited stock of groceries in cans and boxes, a few vegetables in wooden crates on the floor, a stalk of bananas hung in the window near the glass case containing the candy bars. Fancy Nabisco cookies were displayed behind small glass windows in a stack of ochre-colored square boxes made of lacquered tin, with hinged fronts that the manufacturer had provided.

“Crackers and pickles were in large wooden barrels with lids, alongside crates of oranges and lemons. Sugar and coffee came in bulk and were scooped out and sacked as needed, but the salt, tea and flour had their own packaging by Morton, Lipton, Salada and Pillsbury.

“Postcards and souvenirs topped the candy case, and the coffee grinder with big wheels, and the ornately scrolled brass cash register rested atop the wrapping counter, with string coming down from a cone near the ceiling, and brown wrapping paper ready to be torn off from a big roll mounted at the end of the counter. Groceries in boxes on the high shelves were reached by toppling the box off the shelf with a long stick with a hook in the end.”

Wiley’s memoir continued with a description of other items that Anderson’s store carried: “bolts of cloth, hanks of yarn, needles, a case of drawers for Clark’s thread, tape, ribbons and all the notions needed for sewing and knitting. The cloth was measured by marks on the counter or by outstretched arms from fingertip to end of nose. There were cards of buttons and snaps, and papers of pins.”

And there was even more: “Small hardware items, shoes, hats, caps, overalls, dresses, sweaters, pants, underwear, ties, socks and stockings … a plentiful supply of women’s hats and lots of sailoring togs such as officer’s caps and boxes of sneakers.”

The large, wood-burning stove that stood five feet tall and heated the store during the early days was believed to have come from the first Wisconsin territorial capitol building in Belmont and thought to have been secured by the Andersons and taken to Ephraim when the capital shifted from Belmont to Madison in 1836.

Miss Lizzie Anderson ran the store with help from her sister, Miss Munda, neither of whom married. One summer, Lizzie became friends with Bessie Wallis Warfield, a young woman who was visiting the family of her fiancé, naval officer Win Spencer; and Lizzie received an invitation to their Nov. 8, 1916, wedding. Bessie Wallis Warfield Spencer Simpson’s third marriage was to Britain’s King Edward VIII, who gave up his crown to marry her.

When you visit the Anderson Store Museum, you’ll see many of the items described in Wiley’s memoir, and in its gift shop (and online), you can purchase books, postcards, hollyhock seeds, old-fashioned candies and more.