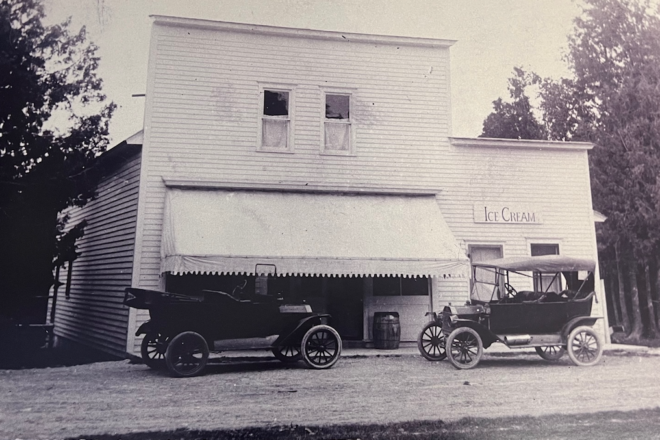 Greg Diltz has fond memories of the Beach Road Market north of Sister Bay. We don’t know how we missed including this little gem in the 2019 series about old stores in Northern Door County, but Greg provided lots of good information for this addendum to the series. His parents purchased Sunset Beach Cottages from Ivar Anderson in 1958, when he was eight years old.

Al Mickelson’s General Store was established in 1912 to provide a place for Sister Bay residents and visitors to purchase food and enjoy ice cream treats. Before closing 76 years later, its owners included the Strahls and Floyd Rhode, who had it in the 1950s.

That’s when Greg recalled being sent there often for items such as bread and milk, and he said his mother shopped there often, in between visits to Krist’s Red Owl “in town.” There was a single gas pump at the curb, which was handy for cars, lawn mowers and boats. As parents shopped, kids would sit on the front stoop, enjoying their sweets, pop or ice cream bars. Greg loved the candy and comic books.

“After the Rhodes operated the market in the 1950s,” Greg recalled, “it was owned or operated by Ken and Bea Charnetski, the ‘iconic Elaine Johnson and Greta Johns team,’ and Paul and Evelyn Hulbert, who were the last owners of the market before it closed its doors in 1988.”

Dick and Lucille Mickelson Kostka – a descendant of the market’s founder – were longtime Gibraltar teachers who lived on the triangle of land created by Highway 42 and Beach Road, and they rented several cottages and duplexes on the property. Although they never operated the market, they were part of its history.

In 1992, John Blossom Jr. and John “Jay” Blossom III purchased the building, which was just up the road from their family’s summer cottage. It had been empty for four years, but they gave it new life as the Door County Ice Cream Factory. Jay made all the ice cream in an old Emery Thompson batch freezer.

In 2000, the Blossoms sold the business to then-21-year-old Todd Frisoni, who had worked there for six summers to put himself through UW-Madison. The words “Sandwich Shoppe” were added to the sign as the menu expanded, but ice cream is still a draw, as it was well over a century ago – and the photos on the wall remind visitors of the building’s former life as the Beach Road Market.