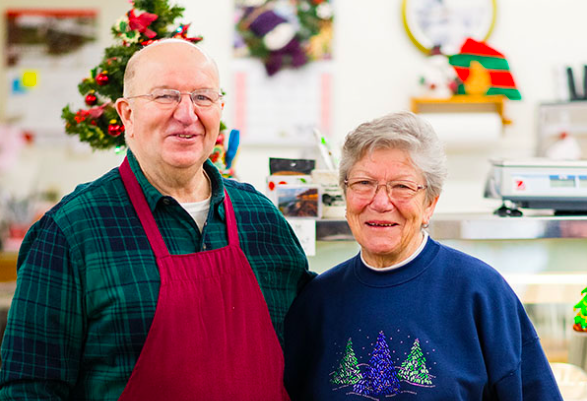 Wayne and Paula Bley have run Bley’s Grocery in Jacksonport since taking over for Wayne’s father in 1995. The store is one of the last of the rural grocery stores that once dotted the peninsula. Photo by Len Villano.

Ralph Herbst and his dad, Elmer, built the first grocery store in Jacksonport in 1949. Ralph left a few years later to join the Navy and ended up making a career of it.

Wayne Bley was six when his parents, Wallace and Laverne, bought the store in 1956 and changed the name to Bley’s Grocery, and he’s been there almost full time ever since, mostly living in the home attached to the store.

Laverne died in 1959. Wallace continued as the meat cutter, and Viola Tanck ran the store from 1961 until her death in 2002. The store was rebuilt after a fire in 1987. Wayne started working in the store in 1967. He did all of the meat smoking when Viola was the manager, and he followed his dad as the meat cutter after Wallace’s death in 1995.

Wayne’s wife, the former Paula Wagner; and their daughter, Angie, help run the store, and Paula also makes – from scratch – the potato salad, cole slaw, baked beans (with several kinds of beans) and other ready-to-eat food that they sell. Their fresh meat is all locally raised – the beef from the Bleys’ own two small farms on County V, and the pork from a neighbor’s farm.

Angie worked in a bank and was a tax preparer before helping her parents in the store. The Bleys’ other daughter, Robin Marx, is an operating-room nurse at Mercy Hospital in Oshkosh, and son Adam is a plumber and electrician who also farms nearby.

And, as with most small family businesses, everyone pitches in. “We’re very fortunate,” Wayne said, “that they’re all around to help when we need it. We don’t even need to call them; they’re just here. When it got to be too much for Paula and me, Angie stepped in. She does our banking, the taxes and everything else that has to be done on the computer. There is so much paperwork now, and the state wants it all on the computer.”

Things have changed a lot since the days when Wayne was first involved in the store.

“We had a Shell gas pump,” he said, “and that brought in a lot of people. There were bigger families, and people shop differently now – not so many roasts and steaks, except for company dinners, but more fast food like hamburgers and brats.

“We used to buy a lot of our produce and potatoes from two generations of a local family. Now we get it from Sully’s – a big operation on County Road C near Potawatomi State Park.” Baked goods come from Pink Bakery in Egg Harbor.

But it’s more than the reliable presence that draws customers to the little market. Wayne counts three generations of customers as friends. Bley’s is a busy place in the summer, but it’s pretty quiet after the fall festivals are over.

The holiday season, though, is a time when many people look to Wayne for special delicacies such as sulz – pork-and-onion-based hors d’oeuvres – and other popular German treats. He still makes brats and smoked sausages, but a smoker with a temperature monitor means it doesn’t require constant watching.

Wayne notes that older customers are passing on, and their children and grandchildren can’t always afford to keep the property. “There are a lot of tear-downs,” he said. Many of the rebuilds are owned by part-time people who don’t spend a lot of the year in Door County.

But there isn’t another grocery store within miles – it’s nine to Egg Harbor and 15 to Sturgeon Bay. As Wayne said, “We can’t compete with the volume of the big stores. It’s the home-grown and hand-cut meat that keeps us going.”

And as customers have posted, “This little grocery is just so darned convenient. It has a bit of everything you need for a meal. The steaks are delicious. The service unbeatable.” Another read, “This store carries all sorts of groceries and convenience foods. Besides the typical items, there is fresh-baked banana bread on the counter and a lovely lady working there.” And yet another said, “My family has had a cabin in Jacksonport for 55 years. Bley’s has always been a big part of our lives. It’s a tiny little gem of a grocery store. We’ve always said that if you can’t get it at Bley’s, you don’t really need it!

And then there was this customer appreciation: “Probably the most important thing about Bley’s is its owners: Wayne, Paula and now their daughter, Angie. They are the salt of the earth, and they will do whatever they can to help you, above and beyond groceries. Second in importance are Wayne’s skills as a butcher. The family also farms, and Wayne butchers his own meat. It’s outstanding! Wayne’s brats are not to be missed! At the end of the summer, we take home a freezer full of them. He also does a fresh ham cut that I’ve never seen anywhere else. Slow cooked with garlic, it’s a taste of heaven.”